Hounded by the Specter of Impending Crap 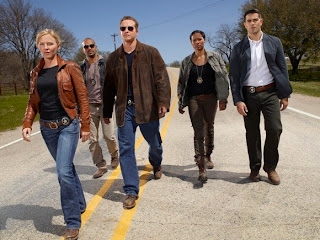 Look, let's make a deal.  Don't bother me and I won't bother you, okay?  I mean you guys look really cool and everything, walking down the middle of the road ready to mete out some tough justice, but I just don't have time for that right now.  You guys are, what?  Bounty hunters, right?  So, yeah, I'm sure blondie in the leather coat and rattlesnake boots looks really sexy kicking in doors to take scumbag meth king-pins back to stand trial and all that, but I just can't be bothered by that at present.  Your crew looks great, they really do, and I'm sure you probably have some smoldering on-again / off-again thing going with  Lurch in suede right behind you, but for real, I just don't have time for it right now.  Okay?  Thanks. 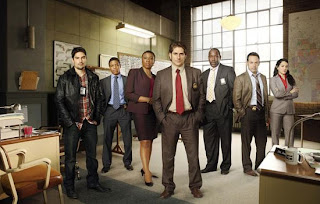 Oh...hey guys, sorry, but like I just told that last bunch of determined justice-fighters, I don't have time right now.  I really don't.  Where are you guys from?  Detroit?  Great set, by the way.  It evokes the gritty decay of the rust belt but also looks like some cool loft space where you could paint or play music or something. And I do appreciate that you went someplace where it's unlikely you'll have bikini-clad chicks oiling each other up in the opening credits, but really, I just can't get into it at present.  I wish you the best, Mr. Red Tie, keeping order on the hard streets of Motor City while also balancing the intrigues of your explosively diverse unit, but I really have to go. 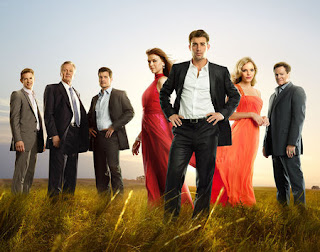 Alright, look, I've tried to be polite, but I'm not kidding now.  I just can't deal with this.  Fall is coming and I have gutters to clean out, plus I should really change the oil in the car before the first frost.  Look, it's great that you all are standing in a field looking all wispy or earthy or whatever the hell it is you're trying to convey, but no, I can't.  I don't really even care why arms akimbo guy is the only one not wearing a tie and has two witches of Eastwick behind him in matching red frocks.  Please, I must ask you to leave.  And on your way out, don't try to hook me with some stupid supernatural power or brooding family secret, okay?   Been there, seen that.  Thank you. 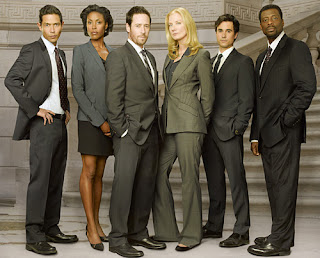 Okay, this isn't funny anymore.  Look suits, get the hell out of here.  Lawyers, right?  Great...good luck beating that boring, dead litigious horse for a few 100 more episodes.  How long until two of you are doing the nasty but also representing clients on opposite sides of a case, but you can't recuse yourselves because no else at the firm knows about you two yet?  Is that the pilot maybe?  Or will one of you way over-identify with a defendant because of some personal trauma in your own life?  Pitch all the attitude you want, I'm not falling for it.  In fact now I'm beginning to feel actual enmity for your whole little dog-and-pony show.  Get out.  Get out, now. 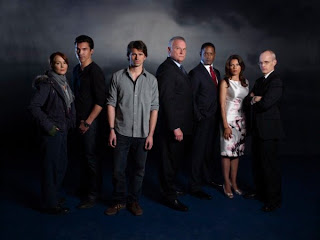 F*#k me running, is there no getting away from you jackasses?  Ooh look, it's the spooky "Event" people, all dressed down in blacks and grays and trying to intrigue me in front of some enigmatic backdrop of metaphorical fog.  Drop dead.  No, first get the hell out of all my media platforms and then go drop dead.  I just don't have time to devote hours and hours of my life to some bogus conspiracy a couple of 20-somethings cooked up on a napkin at Jerry's Deli.  I'm sure you think you have some multi-season story arc of awesomeness planned, but you know and I know you don't...just endless meetings with the network trying to figure out how much padding it will take to get to 21 episodes and renewal for next season.  I don't have the time, the patience, or the will to suffer through more of this "what does it all mean" bullshit?  Wondering whether or not Ronnie or Snooki will be found dead in a pool of their own vomit is an infinitely more interesting and plausible storyline than any crap you guys have cooked up, I'm certain.  So, git, skedaddle, don't let the pixels hit your ass on the way out. 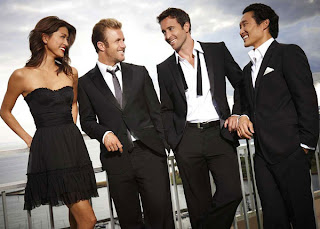 Jesus H. Christ.  What is it with you people?  Is it the unbridled narcissism, the complete lack of any creative imagination, or just obstinate stupidity?  Doesn't anyone in Studio City have anything better to do than stand around all day posing for these ridiculous publicity shots?  The new Hawaii Five-0, right?  Well, how about Hawaii F*@k-Off?  I'm not a snowbird.  I'm not convinced that crime is inherently more exotic just because there are palm trees and coconuts around.  Loosening the bow tie does nothing for me either, pal, it really doesn't.  Really CBS, if your plan is to crawl back up the A-hole of your former glories, you really should have just outbid NBC to get Selleck back, maybe for a show where he drives around the Big Island trying to fill his prescriptions.
Email Post
Labels: Fatal Strategies The TV