The dead are a growth market.  Historically immune to the marketing ploys of the culture industries by virtue of having neither a pulse nor money, the deceased may soon become an important demographic in maintaining the profit trajectories of the major media conglomerates.

Last week, for example, a company called Eternal Image unveiled the Star Trek Cremation Urn.  Made of “composite minerals and metals,” the urns go for $799 and feature a wholly “original” rendering of the Enterprise on the nameplate, a distinction that is bound to give the urn’s owner a proud sense of….well, nothing actually, as he or she will be dead.  Eternal Image also made a Star Trek casket at one point, although that option seems to no longer be available.

Of the new urn, Company CEO Clint Mytych observes, "We hope that it makes the process of picking out funeral products a little bit easier -- it's already a painful process to go through. Nothing seems to come close to 'Star Trek' in terms of staying power and worldwide appeal."   Mytych’s comments raise a number of interesting issues.  One, I’m not sure why the dead would be interested in the “staying power” and “worldwide appeal” of Paramount’s back catalogue, but maybe some individuals find comfort in leaving their remains under the imprint of a growing multinational entertainment brand rather than the decaying iconography of a traditional church.   Americans in particular want to go with a winner, even when they are dead it seems. 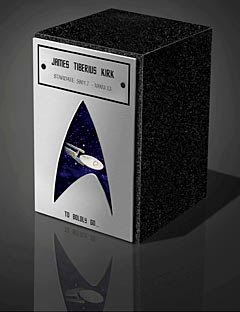 Mytych also appears to be suggesting that it will be the survivors, not the deceased, who will opt for the Trek urn during the “painful process” of making funeral arrangements.  I would think entrusting the eternal future of your ashy self to a particular television franchise would be an intensely personal decision, one probably best made, contracted, and notarized before you actually die.   What if your dopey relatives simply impose their own terrible taste on your final vessel?  After all, they are the ones who will have to look at it everyday.  Without pre-ordering your receptacle and hiring a good lawyer to execute your wishes, you might end up trapped forever in a Jag urn simply because it was on discount and better matched the drapes.

There is also the terrifying possibility of being misheard on one’s deathbed.  Imagine the centuries of profound humiliation experienced by your ashes as generations of future geek-spawn pass by the mantel laughing at the folly of your Star GATE urn.   Or worse yet for the most faithful of Trekkies, imagine that distant moment in the future when Star Trek finally “comes true” (as you must know it will).  Using the Trek urns as a convenient guide, Spock employs Vulcan science to reconstitute and save all clearly identified believers from the past 4 centuries.  Star Gate and Battlestar fans, meanwhile, must continue roaming the shadow-lands of syndicated purgatory, waiting for a scientifically marvelous savior who will never come.   So, if you care enough to devote your afterlife to television, be sure to get those contracts signed well in advance of checking out to Sha Ka Ree.

That Trekkies should lead us all into the final frontier of corpse marketing is no surprise.  Science-fiction has long traded in fantasies of omnipotence and immortality, extending the “magical thinking” of infancy into the teenage years and beyond.  Star Trek in particular returns repeatedly to the fantasy of an ego imbued with such fantastical powers that it can somehow find a way to cheat death, from Spock regenerating himself though that crazy Genesis machine to the Crusher boy touching Indians and leaving our plane of existence for some type of intergalactic sweat lodge.  The whole notion of the ‘Q-Continuum’, meanwhile, implies that absolute power over all time and space is available to those species willing to continue watching Star Trek for the next million millennia.  Even the transporter beam, what with its endless conversions of energy and matter, becomes a quotidian index of reincarnate possibility—not to mention the parallel universes, time loops, cyborg implants, and other ruses that allow the tremulous ego to boldly go where it would rather not. 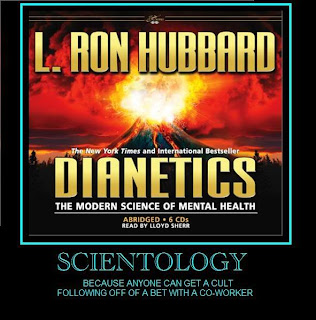 What makes Star Trek particularly powerful in this regard is its ability to project science-fiction fantasies of immortality onto the franchise itself.  In other words, a single sci-fi novel might spin some regressive yarn about becoming “pure energy” or downloading one’s soul into a mainframe, but Star Trek as a 40-something franchise reassures believers that the show itself will survive long after individual viewers have become space dust.  Oddly, Roddenberry’s “sci-fi” religion is thus much more likely to survive into future millennia than Hubbard’s Scientology, no doubt because Trekkies are all allowed to work as their own theologists/cosmologists rather than simply submit to a diabolically expensive program of bio-feedback “clearance.”

Who knows?  Perhaps if Hubbard had had enough sense to populate his origin story with more and better characters, there would be a growth industry in Thetan Blocking Capsules (TBC), millions the world over encasing their ashes in titanium spheres and having them tossed (for a price!) into an active volcano.

Personally, if I should die unexpectedly anytime soon, I am hereby requesting that my ashes be dropped from a helicopter to disrupt shooting on any future Ashton Kutcher projects.
Email Post
Labels: Fatal Strategies Overstimulated Consumers Regressive Phenomena The TV