Next to the land-line telephone, the television set is probably the weakest and most infirm of domestic technologies.  In the past, old TV sets would have been "retired" to a charity of some kind in the hopes that others less fortunate might get some use out of them, but the technology has become so fundamentally worthless that now many feel the only humane option is to leave old sets in the snow to die.  It is believed this allows the TV to drift off into a comfortable sleep as hypothermia sets in and freezes its circuits.  Below, we honor three TV sets recently found waiting for the sweet release of death in area snowbanks. 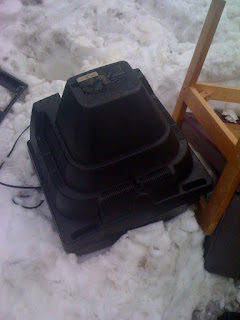 "Sparky"
Born: 12 October 1996
First Image: The Price is Right (4 February 1997)
Last Image: iCarly (10 January 2011)
After serving as the primary set for the Baker family between 1997 and 2008, "Sparky" moved to the bedroom of 12 year-old daughter Emily after her successful completion of the 6th grade in 2009.  Apparently shorted-out by a spilled grape soda during an iCarly marathon in early 2011, the exact details of "Sparky's" demise remain unclear.  While daughter Emily maintains Sparky's death to be an unfortunate accident, older brother Ashton remains convinced the set was "deliberately fucked-up" as part of Emily's scheme to get a new flat-screen for her upcoming 14th birthday.  Plans to make Emily pay for repairing Sparky out of her own allowance were quickly abandoned after a 40-minute tantrum and the realization that Mr. Baker did not want Sparky ripping his upholstery on a trip to the Best Buy where a befuddled staff would express dismay that someone could be so idiotic as to repair a TV that was over 2 years old. 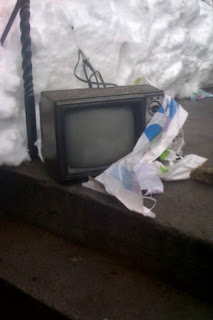 "Lucky"
Born: 15 July 1983
First Image: The Guiding Light (14 September 1983)
Last Image: Mets vs. Cardinals  (13 June 1996)
Initially purchased as the kitchen set for Johnson family matriarch Patricia, "Lucky" spent his best years transmitting soap operas and game shows between 1983 and 1994.  After a brief banishment to the hallway closet following the purchase of a new Toshiba unit, "Lucky" returned in 1996 as the garage TV for Mr. Johnson--but was quickly retired after proving ineffective at receiving local baseball transmissions.  From 1996 to 2009, "Lucky" shared a box in the attic with a similarly abandoned plastic nativity scene.  "Lucky" made a surprise return in the fall of 2009 as a prop in a junior high school comedy skit, but quickly found himself back in the attic--this despite the strenuous objections of Mrs. Johnson over available storage space.  Living on borrowed time, "Lucky" was finally thrown out of the house in January of 2011 as part of a comprehensive attic sweep.  Left in a plastic bag by the curb, he was eventually collected by local sanitation and taken to the dump. 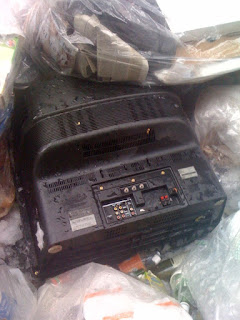 "Cheap Piece of Shit"
Born: 24 May 2005
First Image: C.S.I. Miami (2 March 2006)
Final Image:  Intermittent flashes of a Bob the Builder DVD (5 January 2011)
"Cheap Piece of Shit" suffered a short and difficult life in the home of the Newmark family.   Brought home with high expectations from a local Circuit City, it was soon discovered that the plastic battery cover on the remote was chipped and broken.  Despite pledges by Mr. Newmark to return the "cheap piece of shit" immediately, torpor, laziness, and a desire to avoid lifting the heavy device proved stronger than the 30-day warranty.  Duct-tape used to hold the remote's batteries in place served as a constant reminder of "piece of shit's" cheapness.  These negative connotations were only reinforced in 2007 when the smart-ass friend of Mr. Newmark's son expressed disbelief that anyone still owned a "humongous" box set, especially now that the price-point on flat-screens was so low.  A distracting "popping" sound when activated and the constant sense of "smelling something electrical" by Mrs. Newmark culminated in a storm of rage early in 2011.  After hauling the set to the playroom to serve as a vehicle for playing DVD content for the youngest Newmark child, Mr. Newmark discovered that a broken RCA-array on the set's back panel made interfacing with any external units impossible.  After yelling, "That's it with this cheap piece of shit!" several times so that his outrage could be witnessed by various family members in the household, Mr. Newmark hauled the set to the alley and left it atop a stack of trash, "like the cheap piece of shit garbage it is."
Email Post
Labels: Deadish Media The TV