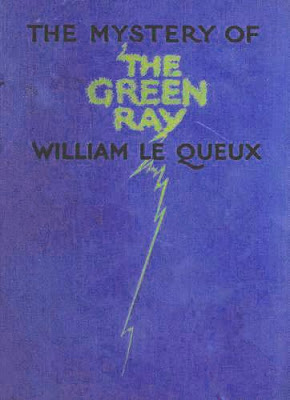 Before enlisting in the army on the eve of WWI, Raymond travels north to Scotland to bid adieu to his love, Myra. As lovers soon to be parted by warfare often do, Raymond and Myra decide to go fishing for the afternoon. Not only do they decide to fish, but they do so at separate parts of the stream. Suddenly Raymond hears Myra scream. Rushing to her he discovers that she's gone blind from an intense green flash. Later, her faithful Great Dane goes blind as well. All very curious. Raymond enlists the services of a top oculist in Glasgow to cure Myra (and presumably her dog), and before you know it, the two men are knee-deep in an ever stranger mystery. The central part of the story involves a great deal of Sherlock Holmes style sleuthing on the part of the eye doctor. We eventually find that "the green ray" emanates from a cavern beneath a house on a Scottish hillside, rented by an "American" who in fact turns out to be a German spy. Not only does the ray emit a blinding flash of light, it is also a fog-cutting spotlight that serves as a magnifying glass, thus allowing its user to find enemy ships in bad weather and see them close-up. Raymond is almost killed by the villanous German and his physicist lackey, but an old schoolchum saves the day just in time. The eye doctor from Glasgow returns with specially made red glasses that both protect and heal those exposed to the green ray. These are put on the dog as well, and everyone agrees he looks "quite wise."
Email Post
Labels: 1910s mystery sci-fi