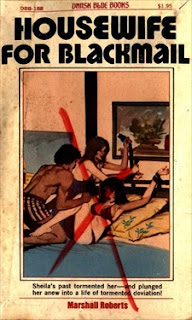 Sheila used to be a "free spirit" living in Frisco, but now she's happily married to Scott the stock broker and living as a housewife in Carmel.  One day while doing the shopping, she runs into Mike and Marsha, her freaky flatmates from her wild days as a hippie nympho.  A drink leads to dinner leads to a joint, and before you know it, Sheila's back at their hotel in a raucous three-way.  Mike thinks it would all make for a great film.

Sheila tries to put her momentarily "lapse" behind her, but before you know it, Mike and Marsha show up at her front door to say goodbye.  But they just have one request.  Would Sheila mind if they had sex on her bed before they left town?  Well, if it means getting them to leave without telling her husband about her previous indiscretion, sure, why not?  But before you know it, Sheila has once more been lured into a raucous three-way.  Mike thinks it would all make for a great film.