How to Revamp the Oscars Once and For All 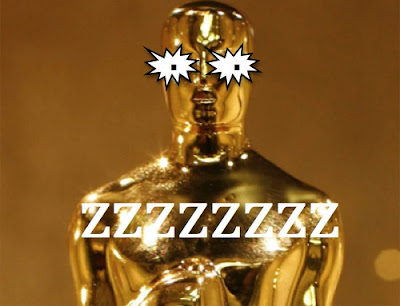 It’s Oscar time again, the high holy night of awards for those mysteriously invested in the fate of abstract commodities like Natalie Portman, Toy Story 3, and the Panavision Reflex-7 Omni-Crane.  Will Markie Mark finally earn the respect that will save him from forever being known as Markie Mark?  Will the Academy recognize an actress for portraying a lesbian in a movie that argues there really is no such thing as a lesbian?  Will Best Picture honors once again go to an inspirational true story of someone conquering an incredible personal challenge or affliction?  This year the odds are greatly increased as this description covers both The King’s Speech (stuttering) and The Social Network (social retardation).  If only James Franco had been trapped for 127 hours between the collapsed walls of a Nazi concentration camp, he’d be a lock!
Why so many are profoundly invested in entertainment properties with which they have no personal relationship remains one of the great mysteries of commodity fetishism.  Whether Jeff Bridges wins or loses tonight, someone somewhere with no link whatsoever to the Bridges family will be in tears.  I submit that person is clinically insane.  For those who simply cannot give up the thrill of reliving high school social hierarchies through these avatars of better looking people with more money, might I suggest a DVD marathon of the new Beverly Hills 90210 instead?
In the years immediately after Robert Benton’s Kramer vs. Kramer beat out Coppola’s Apocalypse Now for Best Picture and Best Director, I would gladly have done 30 days in the tank for punching out the first Academy member I might have somehow inexplicably encountered in the streets of my hometown.  Older and wiser now, I’ve learned that life is never fair, and that variously empowered cretins will often honor a director for adequately framing a Meryl Streep crying jag over someone orchestrating perhaps the final American motion picture to imagine that the movies might be capable of formal, thematic, political, and technical complexity.  Yes, I am aware that Inception is a mind-blowing dream within a dream within a dream.  If I still had a bong and M.C. Escher paintings on my dorm walls, I’m sure that would impress me.

As always, the Oscars are struggling once again to make the broadcast more “relevant” in the hopes of momentarily distracting the Pepsi and Doritos demographic from whatever they happen to be downloading at the moment.   The strategy this year is to introduce younger, firmer star meat in the admittedly exquisite forms of James Franco and Anne Hathaway.   Certainly it’s an improvement over the many years of punishment at the hands of Whoopi Crystal, still, it’s strange to think that new hosts will ever make a difference in improving the Oscars.  For all the attention given to the hosts each year, they generally remain phantoms during the actual broadcast.  How Franco and Hathaway emerging every fifth block to toss the broadcast over to Helen Mirren and James Gandolfini makes for more compelling television is anyone’s guess.  Given this ongoing structure, the best we can hope for this year, as always, is the first documented case of an on-camera spontaneous combustion (Imagine if Jack Nicholson simply exploded this year, leaving behind only a cummerbund and the shades—it would forever change reality as we know it).
The problem is never the host(s), of course, but is instead the stultifying structure of the “awards” format itself.  By now, every person in the country other than those crying over the fate of Jeff Bridges recognizes that the Oscars are wholly disarticulated from any criteria of merit, so watching a parade of celebrities paired to deliver inane banter as a prelude to announcing results inexorably tied to industry politics and midcult taste formations can only sustain interest among the sentient for so long.  Given that the Academy has in recent years cut back on the “interpretative dance” segments, it’s difficult to find even a foothold for good old-fashioned ironic disdain.
But imagine a new Oscars wholly re-imagined for the 21st century, transformed into one of the most vital formats of contemporary television: Reality Competition.  Below are my own suggestions for how the Academy can make the Oscars more compelling, and in the process, transform each category into a must-see “live” event that has to be consumed in advertising-friendly "real time" for maximum effect.
Best Supporting Actor and Actress:  Do we really need to continue segregating this greatest of the minor categories by sex/gender?  First of all, combine them into one mega-bracket.   Then, I propose installing cameras in every hallway, elevator, and stairwell of the Screen Actors Guild office on Sunset.  Each nominee begins the competition segregated in separate offices on the top floor.  In the parking garage below the building are 10 identical Mercedes, one of which contains the coveted Oscar.  A signal from Ryan Seacrest starts a paintball battle to the death until one of the unsplattered nominees locates the Oscar-bearing Mercedes and successfully exits the garage. 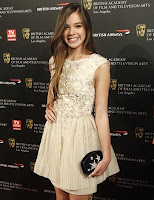 If nothing else, this could lead to more interesting wagering.  This year, for example, the favorite would have to be Hailee Steinfeld.  Her small target size, coupled with her youthful flexibility and agility, would give her significant advantages in such a competition.  Then again, gamblers should also consider that Christian Bale would have no qualms whatsoever nailing a fifteen-year old girl right between the eyes to claim Oscar gold.
For Best Actress, nothing could match the pure spectacle of an old-fashioned “greased-pole cage match,” once a staple of local wrestling broadcasts.  Here the nominees would have to fight among themselves to see who can scale a fifteen-foot pole slathered in grease to claim the coveted “Oscar” perched atop (perhaps the pole can be greased with “Oil of Olay” for product placement support).  While some might find this demeaning, even a bit sexist, I think we can assuage any collective sense of guilt here by including a $100,000 donation to the actress’s favorite charity as part of the honors.  Again, the wagering opportunities would be compelling. Does Natalie Portman still have the caloric energy and a functional ribcage necessary to make it up the pole?  Will Nicole Kidman’s punishing upper body regimen trump the God-given muscularity of Annette Benning? 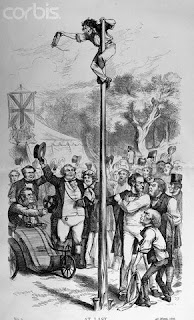 Actually, to make this category even more diabolical, the actresses should not know they have been nominated until their name is actually called to be in the ring. This would greatly expand the possibilities and pleasures of catty snark for para-entertainers such as Joan Rivers, Perez Hilton, Chelsea Handler, and such.  For example, an actress might expect to be nominated and thus show up on the red carpet wearing rugged climbing gear to maximize her Oscar chances.  Imagine the delicious humiliation when Starlet X does NOT get the nomination.  Cameras cut to showcase her shame—sitting as a pariah in her now ridiculous and grossly presumptuous rubber Velcro overalls, thinking about the gauntlet of venomous Entertainment Hollywood Starf@#ker Access Tonight reporters she will have to endure on the way out.
For Best Actor, I propose a contest that allows each nominee to showcase his acting talents.   In five separate but equidistant locations 20 miles from the Kodak Theater, each actor will be stripped down to his underwear, sprayed with skunk juice, and equipped with a “helmet cam.”  The first actor to arrive at the theater after successfully convincing some random passerby that he is indeed “Actor X” and that he needs a ride to the Oscars ASAP will be the winner.  The Helmet cams, of course, will allow us to monitor the action, watching as a skunky Javier Bardem tries to explain who he is to a guy driving a metal-salvaging truck in Boyle Heights.

Ideally, the Best Director nod should go to the person best able to demonstrate that he or she can actually direct.  Here I suggest that each year the five nominees are allowed one by one into a room containing only three props, say Keanu Reeves, a cardboard box, and a pineapple.  Each nominee would have ten minutes to shoot a short film, edited in camera, that makes compelling use of the given materials.  Quick decisions would have to be made.  Who is my lead?  Do I go for narrative or a more abstract character study?  Is there any way to combine pineapple juice and cardboard to facilitate a small explosion of some kind?  The winner will be decided by an audience Applause-O-Meter at the end of the evening.
But the true highlight will remain the award for Best Picture.  This one is particularly complex, so please pay attention.
The morning of the ceremonies, the producer for each of the nominated films checks him or herself into Cedar-Sinai hospital.  In a quick surgical procedure, a small key is implanted just beneath the epidermal layer—perhaps in the stomach or buttocks.  As the climax of the broadcast, the curtain opens to reveal the ten producers on stage still somewhat sedated in their hospital beds, surrounded by all those who have a financial interest in the picture—co-producers, actors, screenwriters, and so on.  At a signal from the host, this “points posse” will begin imploring their groggy producer to “wake up” and begin digging for the implanted key.  The winner will be the first to extract the painfully but not mortally situated key so as to stagger across the stage to symbolically “lock” the film. 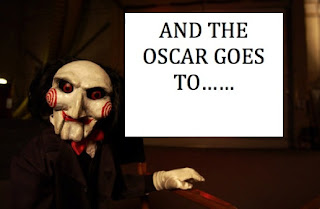 Now, you might say that some producers won’t have what it takes to tear into their own skin and extract a key for something as meaningless as an Oscar.  But here’s the twist.  After the winner locks up his or her picture as the “Best,” bank accounts holding the profits of the remaining nine films will be made available to the general public.  Until the remaining producers successfully remove the keys and lock each film, members of the viewing public can call a 1-800 number and transfer $1000 per household to their own bank accounts.  If a producer is particularly squeamish, he or she might well see 10 or 20 million dollars go out the window in just under ten minutes—all of this with agitated actors and agents screaming at them to “man up” and rip open the stitches.
Once again, not only would this be extremely entertaining to watch, it would afford novel and diverting opportunities for wagering.
Email Post
Labels: Celebrity Bullshit Cinephilia Commerce Fame Narcosis Filmed Product Generation XYZ Overstimulated Consumers Spectacles of Death Valuable Advice to the Culture Industries