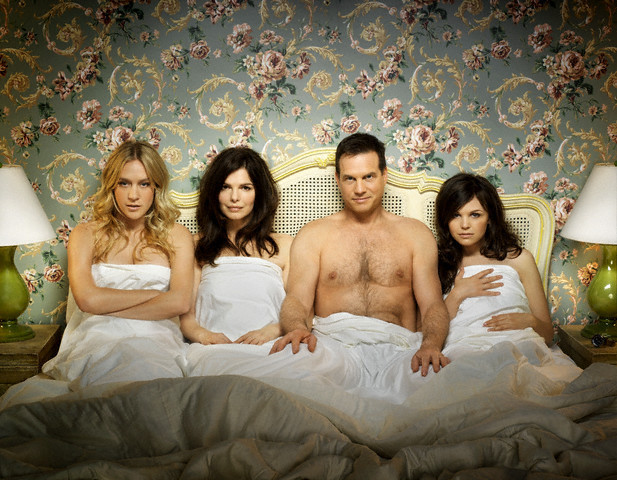 This has been a tough TV season for those interested in the forbidden spectacles of "perverse" heterosexual living arrangements.  Our two most outstanding franchises in this regard, Big Love (HBO) and The Jersey Shore (not HBO), have both been relentlessly depressing in their latest incarnations.  Having achieved great success by inviting audiences to imagine sexual economies that might thwart the familiar trajectory of prom date: going steady: engaged: married: breeding: dead, both programs now seem hellbent on punishing their respective ethno-religious Others for straying from the fold of the traditional television family.
Remember the joy of discovery in the first season of  The Jersey Shore?  Sure, you had to pretend briefly to care about MTV perpetuating stereotypes of Italian-Americans who had been raised in some sanctuary on or around Long Island, and there was the continuing disbelief that six people could be so spectacularly shallow, stupid and egregiously tasteless, no matter how "young" they might be.  But beyond the pleasures of mocking the clothes, attitude, and freakishly distorted body parts, there remained a rather compelling fantasy: six young singles put into a space designed for a summer of drinking, dancing, cruising, carousing, soaking, and "smushin'."   And all these kids had to do was show up a couple of times at an imaginary T-shirt shop so MTV could get some B-roll of them "working."  Caligula never had it so good.  Yes, they appear to all be idiots (except for Vinnie, I think. Vinnie has always seemed vaguely embarrassed to be there--plus he had enough sense to bring his own shower caddy this season.  Smart kid, that Vinnie). But if they're so stupid, why are you the one getting up at 6 AM the next morning to sit in traffic for two hours so you can file widget reports for some mid-management psychopath, all to pay for a house that's steadily losing its value and to support a kid who increasingly hates your guts?  Given these prospects, no wonder The Jersey Shore's fantasy of being truly alive and in the moment  exerts such fascination.  Imagine having no other master than the fight, flight, or f@#k impulses coursing through the limbic system, punctuated by an occasional spin on a boardwalk roller-coaster.  They truly live like "animals," and I mean that in the best sense, their communal existence portending what life might be like for everyone if the social world completely collapsed all around us--an existence organized around foraging for food, seeking out the intoxicating properties of fermented berries, and copulating anywhere at anytime with absolutely no sense of guilt, morality, or responsibility. 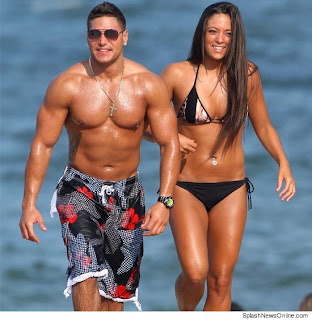 That dream has been severely compromised this season, especially as the ongoing relationship between Ronnie and Sammi reminds everyone in the house of just how poorly monogamy mixes with steroids, liquor, and unlimited access to techno music.   Ronnie, fans will recall, spent much of the Miami season hitting the clubs and drunkenly collecting as many 5-digit phone numbers as he could from the local females.  Snooki and J-Woww attempted to let Sammi know what was going on with her steady beau, but having already retreated into some delusional fantasy that she would die alone if not for the validation of her TV boyfriend, Sammi lashed out at her girlfriends and entered into a self-imposed exile of self-loathing.  This continued into the new season as an ongoing bummer for all involved--perhaps most especially for "the Situation," who was cruelly forced to bunk with the unhappy couple in some kind of nauseous primal scene.  Everyone is trying their best to live the carefree lifestyle of season one--but things are not going well.  Ronnie and Sammi's foolish decision to "commit" some twenty minutes after MTV first let them loose in this Habitrail of hedonism has transformed the show into a low-rent version of In Treatment.  And who needs that, especially on basic cable?  There's a reason In Treatment is on HBO--moneyed masochists who want to wallow in "realistic" accounts of just how miserable emotional life can become should have to pay dearly for such "entertainment."  MTV's target demo, on the other hand, wants to see their peers having all the fun older people imagine them to be having, even if they are not.  And as a middle-aged viewer "creepin'" on MTV, I want to see people much younger than me tempting God to flood the earth a second time.
Not that HBO hasn't made its own salacious foray into alternative modes of sexual organization--namely, old-style Mormon polygamy.  When Big Love began in 2006, the series was smart enough to frame its central quartet as free-willed practitioners of "the principle," thus allowing the show to explore parallels between the Henricksons and other "consenting adults" involved in sexual practices often deemed immoral and illegal.  Premium-cable liberals could not help but support the family's plight: it's their own business what they do in the privacy of their own home(s)!  It was a brilliant maneuver, rendering the suburban heterosexual family-unit "perverse" though an amplification of its underlying imperatives in primitive power relations: acquire wives, acquire wealth, expand real estate holdings, produce heirs, and then take it all with you to a gated community in Heaven.  And yet even in this critique of the hypernormal Hendricksons (who are, after all, "family-values" Republicans), there was the rather courageous suggestion that polygamy itself might have certain advantages.  Indeed, one of the most interesting dynamics in the series has been watching the four partners engage in a rather constant mental calculus of polygamy's pros and cons.  Is all of this crap worth it?  If the goal is to have children in the double-digits, the answer would seem to be an unequivocal "yes!" 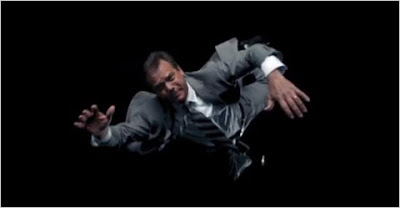 While the family has been "tested" throughout the run of the series, past seasons at least had a moment or two of respite when all concerned genuinely bonded over their "strange" (but scriptural) intimacy.  Not so anymore.  Now it's just one bombshell disaster after another, leaving viewers with the morbid task of figuring out who, if anyone, will remain a Hendrickson by season's end.  I suppose this was to be expected when the series changed its credit sequence a couple seasons back, replacing the four leads holding hands in a circle of "God Only Knows" optimism to the "I'm falling through a void of isolation and alienation to my final doom" sequence that currently opens each episode.
Good riddance, you might say.  What was Big Love other than a harem fantasy, sexual and otherwise, of absolute patriarchal domination?  This more salacious angle certainly figured in earlier seasons (as the promo-still at the top suggests).  But over time, Big Love began to make the increasingly subversive argument that the only way to sustain the heteronormative nuclear family in today's world was to divide it across a committee of four people. True, Bill remains a patriarchal freak, an "alpha-male" of Biblical proportions who remains sympathetic only because he genuinely seems to believe his mission is more Joseph Smith than Hugh Hefner. When he's not hauling his various wives and the fruit of their collective loins around in a huge SUV, Bill runs a chain of hardware stores, routinely drives 100 miles round-trip to intervene in the violent politics of his backwoods kinfolk, and in the last few seasons, has even pursued and attained political office so as to purify his church and legitimize polygamy with the public.  If that's what it takes to live the harem fantasy of rotating sexual access, most men would probably rather roll over on the couch and take another nap.  The wives, meanwhile, had somehow successfully doled out the various roles required of married women in the age of postfeminism, Barb working outside the home and supervising the family finances, Nikki doing the majority of cooking, cleaning, and worrying, and Marjean forging onward with the whole sex kitten/reproduction project.  Trying to keep up with all of these tasks would kill two "normal" people.  This season it appears to be too much even for the four of them. 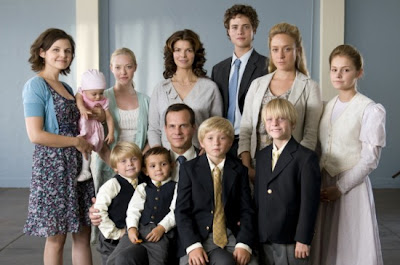 All of this suggests the show's central "fantasy" was never really about sexual variation in the first place, but was instead organized around the even more quixotic search for a family structure capable of sustaining everyone's identities, needs, and desires.  So far, the final season has meted out rather relentless punishment to everyone involved for imagining that extending the family might dilute rather than intensify such difficulties.  At the moment, all signs point to Barb and Marjean checking out of the Hendrickson household, leaving Bill and Nikki to start all over again as the only "true believers" in the whole polygamy thing.  Afterward, HBO will have to continue searching for another series that fulfills the network's post-Sopranos formula: charismatic male surrounded by multiple wives/mistresses attempting to balance work and family in an environment where certain subcultural practices remain illegal and occasionally violent. Here's hoping for a show about a promiscuous Irish Scientologist next season.
As for the Jersey Shore, Ronnie and Sammi have apparently split-up for good (at least as of my last viewing).  Rumor has it that the entire crew is heading to Italy next season.  If so, let us all hope that MTV has both the guts and the clout to get them an audience with the Pope.  At the very least, I want to see a couple of Cardinals pass out when J-Woww wears a leopard-skin tube top into the Vatican--that would be truly great television.  Or better yet, his Holiness greeting an apparently awestruck and reverent "Situation," who in the very next scene is with Paulie and Ronnie in a disco doing body shots off of Rome's skankiest prostitute.  That would be even better television.  And after two seasons of watching "Juicehead" and "Sweetheart" live like miserably undivorcable Catholics in the 1940s, the series owes us a little more scandalous debauchery.
Email Post
Labels: Christians Deviants and Delinquents Normalization Sleaze The TV