As the apotheosis of cine-semiotics, Christian Metz's "Grande Syntagmatique" retains a certain fascination within film theory even today.  Could it really be possible to identify every single possible articulation of time and space in the cinema?  With enough precision and refinement of analysis, might not structuralism's seductive fantasy of achieving absolute mastery over the minimal units and generative grammar of film language at last come true?
Probably not.  For one thing, it's too much fun finding examples that complicate or even completely contradict such bids for a comprehensive mapping of shot relations; in fact, no sooner had Metz introduced the grande syntagmatique than critics began to pick it apart, bringing forth material that seemingly eluded its cascade of chronological and achronological syntagms.  Still, the grande syntagmatique has great heuristic power if only because any exception to Metz's system is inherently fascinating by virtue of its rarity. 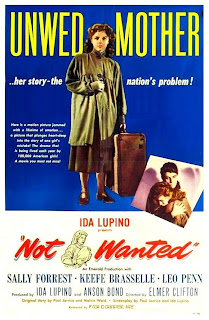 In 1949, Ida Lupino directed her first feature film, Not Wanted.  Based on her own script, Lupino originally planned only to produce the film.  But when director Elmer Clifton suffered a heart attack only a few days into the production, Lupino took over these duties as well.  Not Wanted is the story of Sally Kelton, a teenager who falls for a no-good piano jockey (played by Sean Penn's father!)--follows him to the big city--gets dumped-- discovers she's pregnant--moves into a home for unwed mothers--has the baby--gives up the baby for adoption--regrets it and tries to get the baby back--gets arrested for wandering off with another baby---and then almost goes insane.  Despite its potentially "objectionable" subject matter, Lupino was able to secure Code approval for the film.  Though the film apparently did not do all that well commercially, Eleanor Roosevelt was impressed enough to invite Lupino to discuss the film on her national radio show (historical gloss courtesy of Mary Hurd's Women Directors and Their Films).
In 1962, thirteen years after the film's original release, exploitation promoter Jack Lake bought a few prints of Lupino's movie, inserted surgical footage of a Cesarean birth, and released the new concoction as The Wrong Rut (truly a great title.  An opening title card attempts to convince us that the "wrong rut" is Sally's misguided life path--but any discerning pervert will easily recognize this as code for "inopportune insemination").
What does any of this have to do with Metz?  Having followed Sally's troubles for an hour or so through the logic of conventional Hollywood style, the time arrives in The Wrong Rut for the big childbirth scene.  Below we see Sally sitting uncomfortably, indicative of just how horrible a disease many considered pregnancy to be in the postwar era. 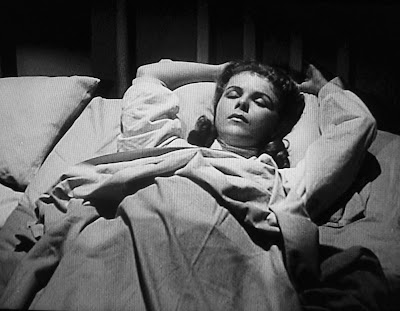 Suddenly, for the first time since the "square-up" at the film's opening, an intertitle makes a somewhat jarring appearance: 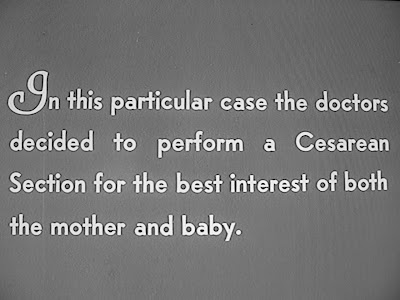 Inserted for the exploitation release of '62, the card signals that the "forbidden" spectacle of childbirth is soon to arrive.  We return to Lupino's original footage: shots of a drugged and sweaty Sally intercut with out-of-focus POV shots of the hallway as she is wheeled into the delivery room. 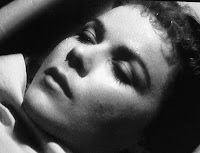 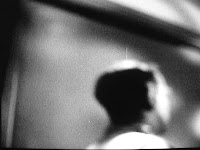 The last thing Sally sees is her nurse sliding out of focus. 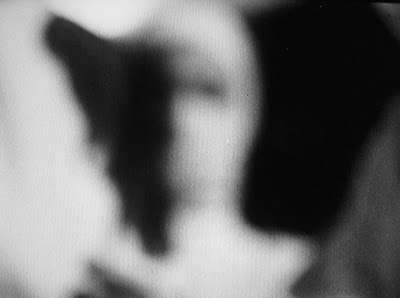 Another intertitle appears, warning of the impending cut from Lupino's black-and-white footage to the color stock of the Cesarean operation.  In a rather weak attempt to disguise the upcoming insertion of a medical film into Not Wanted's original narrative flow, the shift to color is explained as better serving the spectator in attending to the "skill and dexterity" of the surgeons. 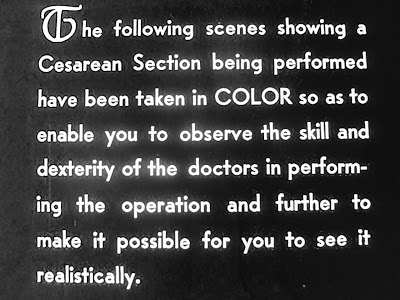 A color intertitle follows immediately, initiating the surgical film's alternation between footage of the operation and intertitles explaining each step of the procedure. 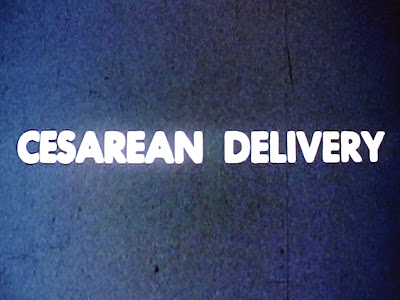 This alternation continues until the surgeons are at last done with the C-section.  An intertitle informs us that they are now closing the incision with "Mitchell clamps" (below). 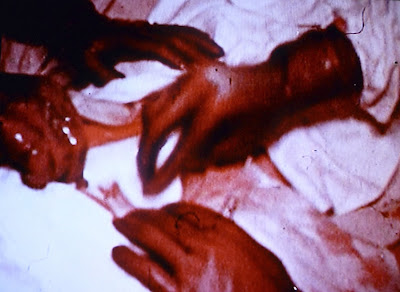 From this final color shot of the surgical film, we cut back to Lupino's footage: an out-of-focus doctor shifts to center screen and into full focus.  The attempt, obviously, is to create some sense of continuity between the red-gloved hands of the surgical film and the b/w footage of the doctor. 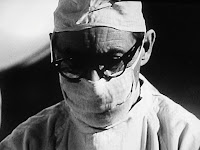 The operation complete, a final intertitle reminds us that this birth is not a joyous occasion. 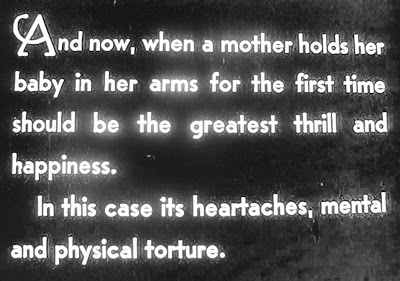 This bit of moralizing out of the way, we return once and for all to Lupino's original footage in Not Wanted.  The doomed Sally rests comfortably, waiting to see the baby she will soon have to give up for adoption. 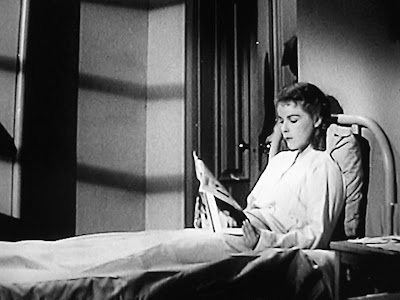 Now, some might argue that this rather inelegant insertion of surgical footage into Not Wanted presents no challenge to the grand syntagmatique whatsoever.  The intertitles clearly seek to anchor the operation as Sally's actual surgery--conveniently shot in color so that we admire the skill of the surgeons (who are suddenly, out of nowhere, the "stars" of the motion picture).  Sally is the "case" that the doctors have decided requires a C-section, and we are encouraged to read the body in the operating theater as our protagonist's (even though we will only see her as a "slit" surrounded by towels and surgical equipment).  There is at least a perfunctory appeal to an integrity of time, space, and action.
And yet the obvious disruption of the film stock in terms of color and quality (most likely a shift also from 35mm to 16mm) is hard if not impossible to ignore, especially amid the flurry of intertitles and sudden absence of any dialog.  This "scene" clearly issues from a time and space wholly alien to that of Not Wanted, a classic moment of "excess" that overwhelms any and all attempts to motivate it within the diegesis itself. It might be argued that questions of "plausibility" are of no concern to Metz's catalog of syntagms.  The Wrong Rut, as an augmented version of Not Wanted, certainly hopes that the spectator will take this weakly staged extension of the original film's birth scene and integrate it appropriately into the spatio-temporal logic of the story.  But what are we to do when a film simply asks too much of us, straining credibility to the point that the juxtaposition--though "motivated"--so thoroughly punctures the stylistic logic of a film as to render both the original and inserted footage equally unreal? 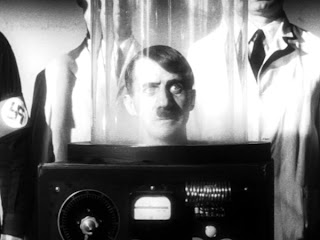 While infrequent perhaps in the more conventional realms of commercial cinema, such spatio-temporal conundrums abound in low-budget and exploitation cinema.  These disruptions, moreover, typically involve more than simply poor special effects or the insertion of studio stock footage (so often seen with Ed Wood's films, for example).  Those cheapies at least construct an overall narrative world where flying saucers fashioned out of paper plates are somehow strangely consistent with the overall look and feel of the film. The real hazard lies in these moments of attempted reconciliation through the logic of standard continuity (They Saved Hitler's Brain provides another prime example.  Begun and left unfinished in the late 1950s, the film was later completed by adding additional footage shot in the early 1960s.  While not necessarily so far apart in actual years, the shift in "sensibility"--even if only read in terms of wardrobe and car design-- is extremely distracting).

Perhaps the more interesting issue here is not the viability of the grande syntagmatique, but rather just how profoundly internalized the logic of the Hollywood continuity system was even in the lowest rungs of exploitation production--even in situations where it was fundamentally impossible to realize it convincingly.  The Wrong Rut's integration of surgical footage is incredibly unbelievable, laughably so.  And yet running  Not Wanted in its original cut and then tacking on the surgical film as a grossly exploitative "bonus" was clearly not an option.  To function properly as an exploitation film--or just as a "film" generally--the two disparate footages had to be integrated somehow, no matter how ludicrously, no matter how much their stylistic dissonance threatened to implode the overall narration.


We already have, thanks to Metz, the "non-diegetic insert."  Maybe the next iteration of the grande syntagmatique, if anyone is out there working on it, needs still yet another category: the quasi-diegetic insert.