Born to Raise Hell: The Untold Story of Richard Speck (1967) 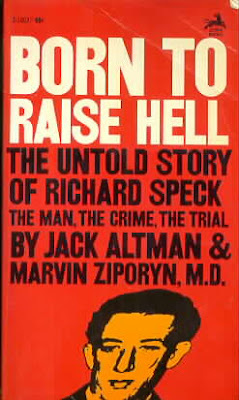 Oddly sympathetic portrait of spree-killer Richard Speck, written from the perspective of the prison psychiatrist who interviewed Speck several times a week during the six months Speck sat in jail awaiting trial.

For the young folk out there who don't remember when serial killers and mass murderers had yet to be displaced by "sleeper cells" and the Tea Party as sociological enigmas of terror, Speck murdered eight nursing students in a South Chicago suburb on the night of July 14, 1966.  Two weeks later, sniper Charles Whitman killed 16 and wounded 32 from the top of the clock tower at the University of Texas in Austin.  This initiated a characteristically American "freak-out" that the nation had changed in some fundamental way, and that everyone could expect a mass murderer on their doorstep in the coming weeks.

As the staff psychiatrist at the Cook County prison, Ziporyn was originally charged with evaluating whether or not the arrested Speck was a suicide risk, but the sessions continued all the way through the trial.  Here this dialogue assumes the form of a psychological mystery.  While not denying his guilt, Speck claimed initially not to remember the night of the murders.  Ziporyn gradually elicits the details surrounding the crime and relates them to Speck's troubled past in Texas.

The book is "sympathetic" in that Ziporyn concludes Speck was neither a sociopath nor a psychopath--but was instead the victim of the long-term effects of a severe head injury.  Noticing that Speck seemed to constantly suffer from blinding headaches, Ziporyn eventually helps Speck remember that on three separate occasions as a teenager in Dallas he had been knocked-out cold by blunt force trauma.  That, and a penchant for mixing speed with hard liquor, "explains" why Speck snapped that night and went on a killing spree.

In attempting to "understand" Speck rather than simply boil him in oil, the book presents a rather odd remnant of sixties liberalism.  Were such a crime to happen today, the nation's incredible lurch to the right over the past 30 years virtually guarantees that no psychiatrist would dare offer any "explanation" other than "pure evil."  Related to this, the first edition of Born to Raise Hell came from Grove Press--New York's resident publisher in the 60s for all things "transgressive"--Beckett, Robbe-Grillet, Victorian pornography, and also, apparently, attempts to understand outbreaks of random violence through the logic of science rather than Satan.
Email Post
Labels: 1960s amok Chicago psychokiller true crime