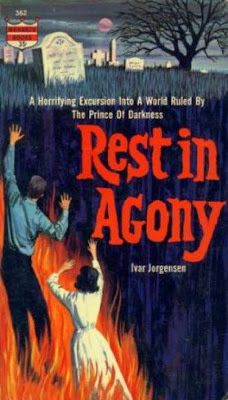 I had very high hopes for this one.  Look at that cover!  A Horrifying Excursion Into a World Ruled by the Prince of Darkness...Rest in Agony!!!
Originally published in Fantastic Adventures (January 1952), Rest in Agony opens with high-school brother and sister Hal and Lisa mourning the loss of their beloved uncle Ambrose (clue to pulp readers: anyone named Ambrose will be revealed at some point to be involved with Satan).  Ambrose had been a generous benefactor to the kids during his lifetime, and they're pretty broken up by his passing.  Then, out of nowhere, the sports reporter for the local paper shows up and demands to retrieve a copy of a book that had been in Uncle Ambrose's possession.  The book is titled, appropriately enough, The Book of Ambrose.  Hal throws the guy out, but later he gets a phone call...from his dead uncle!  This inspires him to find and read the Book of Ambrose, which turns out to be full of instructions for various Satanic rituals.  Hal is suitably offended and disappointed that his uncle mingled with Satanists.
Later, Hal and Lisa's parents invite them into the living room for an important announcement.  Lisa is actually adopted.  They're not really biological brother and sister.  It's quite a bombshell, but Lisa handles it fairly well, so well in fact that the parents decide to go ahead and leave the next day for a previously schedule two-week vacation!  There had already been some hints at a "perverse" attraction between Hal and Lisa, and now with the parents out of the house and the incest taboo erased, Hal and Lisa are instantly all over each other in a creepy Greg and Marsha Brady kind of way.
Soon after this, Lisa disappears into thin air, and we discover that she has been kidnapped to be a Satanic bride.  Hal and Lisa's old boyfriend, Mark, set out to rescue her, but before you know it, Hal is having dreams about a sexy temptress at the local department store who uses a living snake for a bra.  In a nod to Barthes' observations about eroticism and "the gap in the garment," this provides one of several occasions for the author to note just how much sexier the devil women are when wearing one last item of clothing rather than being entirely nude.  I thought about this truism some and have come to the following conclusion-- I think men find the semi-clad more seductive for the same reason that pre-packaged cake mixes ask the consumer to fold in an egg.  The egg, apparently,  is just for show so that the consumer feels s/he has contributed something useful to the "homemade" cake.  I think it's the same with semi-clad women.  A devil woman appears before you totally nude and you think, well, what is there left for me to do?  By being into Satan and totally nude, she's pretty much already seduced.  But if she still has a writhing snake bra on her body, there remains somewhat of a challenge.  Can I get her to remove the writhing snake bra?  How many hooks are there on a writhing snake bra?  Will the writhing snake bra bite me if I attempt to remove it?  And so on.
At any rate, Hal is soon drugged and gradually initiated into Satanic rites by the department store Satanist.  He's pretty cool with all of it, seeing as how he is promised untold riches, power, and access to a snakebra-less hottie, but every so often he hears the voice of his dead uncle Ambrose calling to him in warning.  Eventually he figures out that Ambrose wasn't really a Satanist, but was instead a spy who was trying to learn all of the devil worshippers' secrets so that he could expose them. Nevertheless, Ambrose appears to be trapped into some Godless limbo somewhere between Heaven and Hell.
This all leads to the inevitable showdown where Hal has to break free from the spell of his Satanic salesgirl and rescue Lisa before she is married to the sports reporter, who we now realize is "Satan's representative" in the town.  Apparently, to become a bride of Satan, one must willingly commit--but Lisa stands firm, she will not embrace Lucifer.  Suddenly there is a flash of light and who should appear but Jesus!  Well, at least his arm reaching out  from the mystic other world.  Jesus congratulates Lisa for keeping her "purity" and says now she can become the "Bride of Christ" (a nun, perhaps?).  At any rate, Hal isn't going to lose his best girl to another guy, even if that other guy is as swell as Jesus.  But then he figures it all out.   It's a trick.  That's not Jesus at all, but Satan pretending to be Jesus!  Hal stops the wedding just in time!  They all "wake up" in a crappy abandoned building and see a few particularly menacing, probably possessed rats run away.
Later, they all pray extra hard, and it appears Uncle Ambrose is saved from his nether-limbo and allowed to "rest in peace" rather than "rest in agony."
In addition to writing this apparently influential bit of devil-lore, Fairman dabbled in a number of other popular genres.  Perhaps most incredibly, he would later write the TV novelization for That Girl, which is rather extraordinary in its own way--but I will save that for another day.
Email Post
Labels: 1950s creepy and/or uncanny cults: real and imagined drugs horror occultism Satan