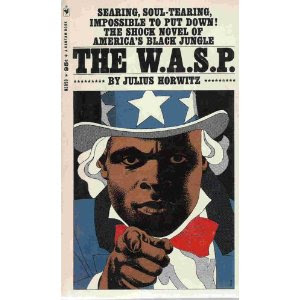 In addition to writing nine novels, Julius Horwitz was a welfare case-worker in New York from 1956 to 1962, experience he first shared in his 1960 book, The Inhabitants.  In The W.A.S.P., Horwitz turns to Harlem as a circle of white liberals recount their interactions with "Emerson," a Harvard-educated African-American who, after dropping out of Yale Divinity School, takes a job as a "storefront minister" on 118th street.  This time Horwitz refracts his no doubt harrowing experiences as a welfare worker through Emerson, a brooding intellectual who considers Harlem's residents to be essentially "dead" and their children as "little monsters."  Odd in tone and structure, the book bounces back and forth between standard 3rd-person narration and letters written by Emerson himself--most of which are angry indictments of America's ongoing failure to address the politics of race interspersed with horrific accounts of babies tossed from windows, gang-rapes on church floors, 11-year old junkies, and elderly couples beaten to death with iron bars.  Troubling, which I guess is good, mainly because of its unexpectedly nihilistic tone.