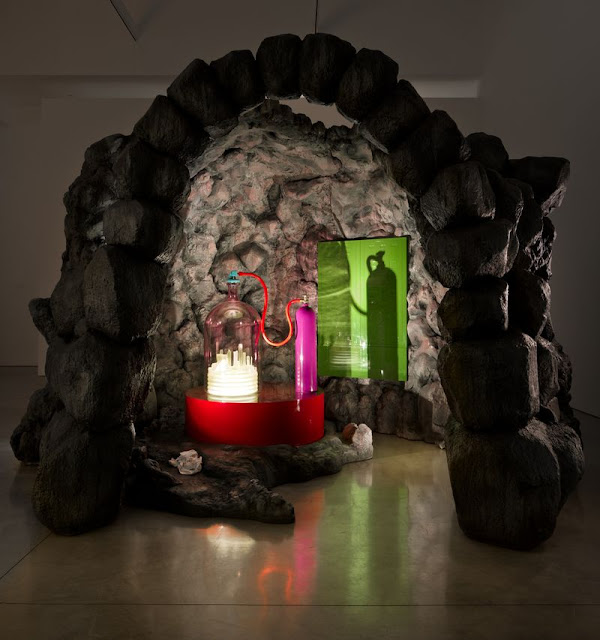 If you follow the world of contemporary art and have an interest in living in a world that might be less horrible, you probably have heard about the apparent suicide of Mike Kelley on Wednesday in California.  I can’t say that I knew Mike well, but I did have the privilege of interviewing him on a couple of occasions, visiting his studio, and writing an essay for one of his recent exhibits.  My condolences to his close friends and colleagues as I can only imagine how stunning and sad Mike’s passing must be.  Even in the brief and primarily professional exchanges I had with Mike over the past few years, I had really come to value, not just his amazing work, but also his wit, creativity, and generosity as a critical thinker.
My first conversation with Mike was an interview for the premiere issue of Tate, Etc. in 2004.  Mike was revisiting his famous exhibition on “The Uncanny” for the Tate-Liverpool, and had suggested to the editors that he and I might stage a dialogue about various states of uncanniness.  It turned out that Mike had read my book on haunted media and thought a thematic conversation would be more interesting than the usual artist interview.  I was surprised and flattered by his interest, obviously, because like most in academia I assumed the only people who read my work were forced to do so as an assignment or out of obligation.  The idea that a civilian--an artist no less--had read the book and wanted to continue the conversation was nothing less than mind-boggling.
I’m embarrassed to say that my knowledge of Mike’s work was, at that point, pretty much limited to his now iconic cover for Sonic Youth’s Dirty elpee.  So, in an effort to hold my own on the Art with a capital A front, I prepared for our talk by reading as much about Mike’s career as I could.  And what a revelation it was.  As I encountered more and more of the work, it gradually dawned on me that Mike was a primary architect of a sensibility that I had been living in since my early twenties, a way of negotiating the often intertwined wonders and horrors of late twentieth -century American culture that my generation had completely internalized without really knowing its source.  In short, I realized I had been living in Mike Kelley’s world—psychically, affectively, politically--and didn’t even know it.
By the time I finally met Mike in person, I was prepared to deal with an ego and attitude conforming to all my worst stereotypes about the rarefied world of the avant-garde.  And of course, I couldn’t have been more wrong.  As so many have said in the past day or so, Mike was incredibly unassuming and direct, interested in seemingly everything, and amazingly conversant in cultural histories both high and low (or “accepted” and “repressed” as he called this divide).   All of our meetings were ostensibly about preparing material in relation to one of his shows—but he was always just as interested in whatever I was working on at the time, and gave me invaluable feedback on possible sources, angles, and weird tangents.  After mentioning once that I was writing a piece on “mime-hatred," Mike sent back an extensive list of the most relevant and horrifying mime materials imaginable.  An entire chapter of my next book stems from Mike introducing me to the mythology of Richard Shaver, the once famous now largely forgotten “hollow earth” writer of the 1940s.  His elegant and characteristically precise essays on Caltiki The Immortal Monster (1959) and The Baby (1973) have become and will remain staples of my film syllabus for as long as I am still teaching.
Losing Mike is a terrible blow to the art world, obviously, but I will also miss him as an insightful critic, historian, and walking archive of a subterranean twentieth-century.  I wish I had met him earlier and known him longer.  One thing is for sure—the future just got a lot more boring.