The mile-high stack of battered paperbacks in the closet yields another gem. 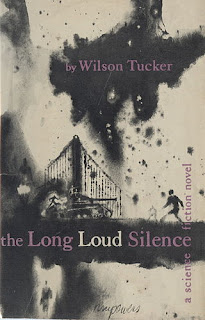 The Long Loud Silence first appeared in hardback in 1952 featuring the tastefully modern cover to the left (where its status as "a science fiction novel" is rather elegantly printed along the fore edge).  The version that attracted my eye, of course, is the more garish Dell paperback of 1954 to the bottom right, featuring what appears to be a man and woman on the run from some type of alien with a ray gun! 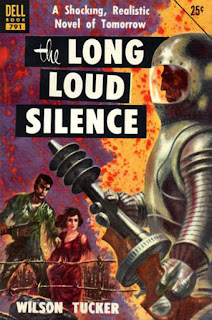 Actually, the book is a post-apocalyptic road tale, and much better written than most.  Russell Gary, a corporal in the army, wakes up in a hotel room after a three-day bender to discover the town around him has been mysteriously deserted.  With no news on the radio, he realizes the nation has been attacked and sets out to rejoin his army unit.  On his way he gradually finds a few more people alive and begins to piece together what happened.  An enemy--it's unclear who--has pretty much destroyed all life east of the Mississippi.  The big cities have been hit by dozens of A-bombs, while those in the countryside have been wiped out by weapons distributing the bubonic plague.  Gary reasons that he and the few survivors are somehow immune to the plague.

When he gets to the Mississippi, he finds the western half of the U.S. has quarantined everyone on the other side of the river.  Most of the bridges have been blown up by the army, and anyone trying to cross the remaining spans is shot on sight.  From here, the book follows Gary as he wanders around the eastern U.S. waiting for the quarantine to be lifted.  A week becomes a month, one month becomes a year, and so on.  Like most stories in this mode, Gary meets up with different folks on his journey, and then after a few days or weeks, returns to his itinerant travels to nowhere.

What is particularly elegant about this story, however, is Gary's gradual recognition that the western half of the country is rebuilding and getting back to some semblance of normality.  Staying at a farmhouse one winter and watching guard at night for the family, he notices that radio stations are beginning to come back on the air from the west.  He listens to them all night, desperate to reconnect with civilization, but eventually realizing that the government is pretending no one is alive east of the Mississippi--he and his fellow refugees have been written off.  Those who did survive will be left to slowly starve to death and descend into cutthroat anarchy.

I won't go into too many details as this one is actually worth not spoiling--especially the last third.  And the ending!  If you're dying to know more about the plot, check here, and you'll see a classic example of a pop author being reigned in by his publisher, in this case probably for the better.
Email Post
Labels: 1950s apocalypto not bad-pretty good in fact pulp sci-fi