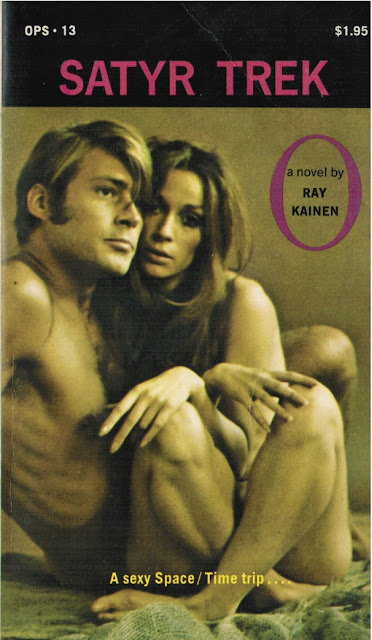 
From that odd late-60s/early 70s genre of sci-fi sleaze that gave us Barbarella (1968) and Wham, Bam, Thank you Spaceman (1975), Satyr Trek is the story of Raunch Gaffer, a married man who innocently fills out a sex questionnaire only to find himself transported into a variety of science-fictiony sex scenarios.  How this happens, exactly, is unclear.  Somehow,  after he mails in the questionnaire, it gets caught in a techno-argument between two gendered computers.  Rather than arrive at the scam artist who advertised the sex survey in a cheap magazine, Gaffer's form ends up at the "Earth Data Control Center," which we are told "had been able to transcend time and space for a long time." And that's just what happens.  Raunch is magically transported to his first adventure.

I won't try your patience with a detailed description of each stop on Raunch's tour of the sexual universe--for that you can track down this gem for yourself.  Below, however, is a brief chapter by chapter outline--and I will warn you, like a bad acid trip, it just gets weirder and weirder.


1. Raunch's first adventure involves weightless sex in an anti-gravity coliseum.  Turns out he's "auditioning" for a big alien variety sex show broadcast nightly on alien television.  He's pretty bad at it, though, and is summarily fired.

2.  No worries, because next he's a passenger on some kind of sex-tourist spaceship heading to Jupiter.  There he is to encounter a recently discovered though improbably named alien race known as the "Cocksuckers."  Each human--male and female--is allowed one trip to this space sex zone (otherwise they might become addicted and go insane). Somehow the "cocksuckers," which are rather formless blob-like people, invade the ship, take over the person's mind, and then make them relive perfectly realized versions of their most cherished sexual memories.

3. In his third adventure, Raunch practices underwater sex with some form of alien mermaid.  Really just a rehash of the "anti-gravity" fantasy.

4. Next Raunch wakes up and finds himself captive in a zoo run by hideous aliens, in this case giant preying mantis creatures.  As so often happens when humans appear in zoos, the aliens want him to demonstrate procreation with a female of the species. He does so.
5. Chapter five, in which the author demonstrates his sense of humor by naming a planet "Dogpatch" and making Raunch the only available male amid a legion of busty Amazons.  (ed. note: please do not attach any special significance to chapter five.  For some reason "blogger" will not allow me to change the print back from red to black.  Thank you).

6. In a particularly long and complicated chapter that, again, was difficult to follow, Raunch arrives on what seems to be a planet of prostitution where he is surgically altered so that he might switch back and forth from male to female according to his customers' whims.
7. Now things start getting a little freaky as the author betrays his ambition to write science-fiction over smut.  In his seventh adventure, Raunch has contact with the alien overlords who are guiding his trip through the universe.  Then they turn him into a tree so that he might experience the vegetable perspective on life, sex, and death.

8. Here the acid fully kicks in. The alien overlords transform Raunch into a black hole, or he assumes the consciousness of a black hole, or something like that.  In addition to being mind-blowingly cosmic, it also allows Raunch and the aliens to make a cheap joke about the female of the species as akin to a black hole absorbing all the energy of the universe.  And then, according to a process that was simply impossible to follow, Raunch somehow becomes both a black hole and a regular guy sitting in some futuristic waiting room where people are learning to operate a psychic sex simulator device.  This part might be a reference to the "white room" sequence in 2001, but again, I wasn't willing to do the amount of orange sunshine necessary to make sense of it all.
9.  As astrophysics predicts, Raunch then transforms from a black hole to the singularity--breaking the speed of light and traveling back in time to a primordial planet where the richest "dirty old men" in the universe go to procure the ultimate sex dolls, perfectly adapted sex nymphs apparently grown like flowers out of the soil.
10.  Raunch then finds himself alone in a void (or still as a black hole, I'm not sure).  He perceives himself returning to a giant cosmic womb which is in the process of collapsing (or he is collapsing into the void, I'm not sure).  It is the end of the universe!  Actually, this part is worth quoting, just because it is so insanely inspired:

A cunt of unimaginable construction, out of the very core of the universe itself, suspended in the holocaust of compression that was Raunch.  Perhaps it was a figment of his twisted atoms, but Raunch moved closer and closer, tightening up at every moment, toward the end of that tunnel, the final tunnel, he thought, with what energy he could muster for the task, the final tunnel from which we all came and which we all seek.
The womb.
The monobloc.
The ending.
And Raunch exploded, in a fractional moment hearing the scream of ecstasy and agony about him
as
the
universe
ended.

11.  But not really, for Raunch wakes up back in 1969 where he discovers that his wife, Velma, has made a similar trip through space and time (either in another dimension or later in the queue, it's unclear).  Having received an education in the cosmic implications of sexuality, they retire to the marital bed, where we are left to imagine things have been somewhat spiced up.
The end....or is it????