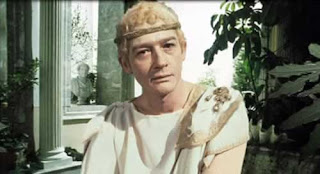 If you have a more embarrassing brow trapped half-way between your high and low, then there is a good chance you have seen I, Claudius, the 1976 BBC adaptation of Robert Graves’ 1934 novel of the same title.  Loosely based on the particularly decadent line of succession in the Roman Empire from Augustus to Tiberius to Caligula to Claudius himself, I, Claudius was potboiler history at its best, a lurid melodrama featuring such legendary scene-chewers as Brian Blessed, Patrick Stewart, and Derek Jacobi.   Most memorable, though, was John Hurt as Caligula.  Shot a year after Hurt had starred as Quentin Crisp in The Naked Civil Servant, Hurt portrayed Caligula as the most mincing, petulant, and perverse polymorph ever on television.  Though the series could only go so far in what it actually showed on screen, the implication was that Caligula would fuck anything and everything that moved—his sister, his horse, his guards, his dead sister, anything.
I have fond memories of watching that show on PBS back in junior high school, probably because—despite its no doubt spurious “historical accuracy”—it had the odd effect of making me think history might be very enjoyable to read and think about, if only because the series hinted that other people in other times had more interesting lives than collecting baseball cards or riding a bike down to the 7-11 everyday for an Icee. 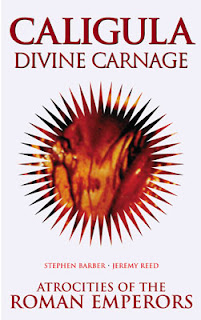 So, it was with some excitement that I stumbled upon a copy of Caligula: Divine Carnage during a recent thrift run.  Even better, the book is apparently only one of several volumes in the Atrocities of the Roman Emperors series.  Amazon tells me that the Brit lad-mag Bizarre dubbed it “the greatest history of Caesaral carnage ever written,” and that author Stephen Barber, a “noted cultural historian and the leading authority on Antonin Artaud,” was once called “the most dangerous man in Britain (Barber co-wrote the book with Jeremy Reed, who, while not necessarily dangerous, was called “England’s greatest visionary” by J.G. Ballard, which strikes me as even better than being the most dangerous).  It looked very promising.
For the first twenty or so pages, Barber and Reed almost have you convinced.  Sure, a lot of what they describe seems improbable.  Maybe Tiberius forced everyone in the palace to kneel every morning before his “diseased, blackened sexual organ,” maybe he didn’t. And perhaps it's only slightly hyperbolic to say Caligula spent “the first months of his reign almost entirely in incestuous copulation with his sister, Drusilla”—that depends on just how one defines “almost” and “entirely.”  But then Barber and Reed go too far, writing that Rome’s “plebian scum” loved Caligula because:
…he was a visible presence in the filthy backstreets of Rome, often to be seen carried about in a litter with Drusilla by his side, energetically masturbating with one hand while distributing gold coins with the other; the plebian scum elbowed and crushed one another into the dust in order to simultaneously catch the imperial spurting semen in their mouths and the coins in their hands.
Now, this strikes me as highly improbable on any number of levels.  That Caligula might enjoy a good wank while throwing coins out of his litter is plausible, I guess, but how long could one really sustain such a jerk ‘n’ toss?  I suppose it's possible that Caligula began each day by venturing forth into a filthy Roman alley to masturbate and distribute his coins, but after each dispensation, wouldn’t he need a few minutes to rest before moving on to the next filthy alley?  I’m willing to concede that Caligula at 23 was probably extremely resilient and horny, but still, this seems like it would become a burden at a certain point. And what did he and Drusilla do while Caligula was in his refractory period?  I'm sure what seemed like a great idea while they were back in the palace would become, at this point, rather boring and even awkward.
And then there is the question of the “plebian scum” angling to receive the “imperial spurting semen.” Now, again, no doubt Caligula at that point was a young man with a first rate prostate and impressive distance, but just how would one project semen from a litter (where one typically sits or reclines) to the waiting mouths of the plebian porno cast?  I suppose Caligula might stand while he threw coins and masturbated, but then the litter would be in danger of overturning, unless of course Drusilla was doing same on the opposite side—which seems unlikely.
Later we learn that Caligula’s profligate spending (of money) had all but depleted Rome’s coffers.  While touring France, Caligula gets the inspired idea of canning his own shit and selling it for the equivalent weight in gold.  Now, again, I am willing to concede that a power-mad, soon-to-be-self-deified Roman emperor might truly believe his shit was worth its weight in gold, and I’m also willing to concede that terrified subjects in France might be compelled to buy said shit with gold to avoid execution.  But then we are told this: “Soon the Empire’s coffers were starting to bulge again.” 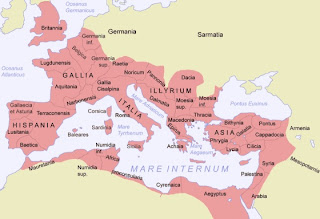 Again, I’m no expert in antiquity, but I do know that Rome was a pretty vast empire that had a lot going on, activities that no doubt required lots of money.  It’s hard to imagine that any Emperor, even one as full of shit as Caligula, could really make any substantial dent in the Roman budget merely by shitting into little cans.
Finally, let us consider Barber and Reed’s account of Caligula’s deification ceremony.  To mark his transition to a God, Caligula enlisted his favorite gladiator, Superbus, to bugger him in front of thousands in the Coliseum.  We then read this:
A mysterious eight-foot-tall figure, masked and dressed entirely in black, held a scimitar poised over Superbus’s head as he pumped away.  Then, at exactly the same moment that the gasping Superbus ejaculated and the emperor convulsed in a grandiose orgasm, the black-clad figure skimmed the gladiator’s head from his body with one great blow of the scimitar.  A spurting torrent of arterial blood fountained up into the air from Superbus’s severed neck at the same moment as his terminal semen flooded the emperor’s divine rectum, the great gouts of scarlet blood falling on Caligula’s head and into his mouth as he twisted around to receive them.
Even if we concede that this event was actually choreographed for the benefit of the plebian snuff-scum, so much of the bio-physics involved here seems unlikely, what with all the timing and twisting and such.  And it is especially difficult to imagine how Superbus could “perform” in this context given that an executioner stood over him with a giant scimitar.  Perhaps Superbus didn’t know the fate that awaited him—but really, what else could a 8-foot guy dressed in black with a scimitar over your head signify?
So, in the end, I’m afraid I must call shenanigans. This stuff may all actually be in the historical sources consulted by Barber and Reed--but that just goes to show you that one shouldn't believe everything one reads.
Email Post
Labels: amok cults: real and imagined politics Sleaze truly tasteless UK what boys think about