The Market in Quirk 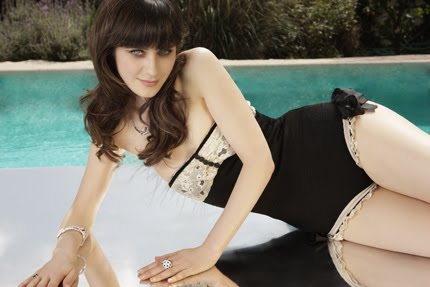 A lot of haters out there gunning for Zooey Deschanel, star of Fox Television’s New Girl and ½ of the singing duo She and Him.  I’ll admit I had no dog in this fight until recently.  After all, New Girl pretends to speak for a younger generation that may actually exist or may have been completely fabricated for television—I have no way of knowing.  Meanwhile, the only “She and Him”-related track I own is M. Ward’s esoterically selected and tastefully realized cover of Daniel Johnston’s “To Go Home,” and I believe that’s just him with no she.
But I did start paying attention a couple of weeks ago when Zooey D. shared this tidbit with the New York Daily News.  The article recounts how in grade school, girls “spat” in Z.D.’s face, and then:
Though the bullying stopped long before she attended Northwestern University, Deschanel continued to have a difficult time fitting in during her freshman year at college.
"I went to Northwestern because I had gone to a really nontraditional high school," says the actress, who counts Jake Gyllenhaal and Kate Hudson as her former classmates.
"I was like, 'It'd be cool to have a traditional college experience,' " she says. "Then I was like, 'Oh, but none of these people understand what's cool about me. My specialness is not appreciated in this place.'"
Well, boo fuckin’ hoo, Zooey Deschanel.
First of all, it’s always amazing to me when someone reaches the age of 30 (Z.D. is 32 by my count), and still believes the various indignities he or she suffered in grade school are somehow wholly unique.  In elementary school, I got my ass kicked everyday for a month by some psycho-hillbilly who had just transferred from Alabama.  Why?  I’ll never know. I will always assume it was because he was from Alabama.  Another kid almost beat me up because I still thought Smoke on the Water by Deep Purple was pretty cool (that impulse, at least, I can now somewhat understand).  When I was in the 7th grade, finally, some weirdo 9th grader (on the other side of the terrifying puberty line) followed me around all year calling me “Maserati.”  I still don’t know what the hell he meant by that, I only know that it was supposed to frighten and traumatize me.  And I guess it did, for a while.
But I would never bring these incidents up as significant, defining episodes in my biography, because they are not.  Getting abused in the American junior high school system—verbally, physically, emotionally—is as common as dirt; in fact, many would argue it is the institution’s explicit function (the only thing boys learn in junior high, as far as I remember, is how to conceal troublesome erections and where to hide to avoid pummelings by older boys suddenly seized by even more psychotic outbreaks of testosterone, typically triggered by the unexpected presence of girls.  That and maybe a little algebra).  If, at the age of 32, you still feel bad about this treatment, then I’m afraid I’m going to have to reserve the right to spit on you right now, this very second, metaphorically if not actually glandularly. 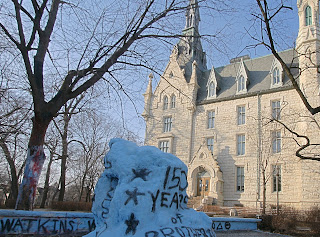 But Z.D.’s comments caught my attention, not so much for rewriting a bad day on the playground into a solipsistic trauma of life-scarring magnitude, but instead for her implicit swipe at my current institutional home and paycheck signer, Northwestern University.  I should say up front that Z.D. flamed out at NU before my time, so I have no personal vendetta against her.  I should also say that I don’t particularly bleed purple, so the following should also not be seen as some type of reflexively jingoistic defense of all things Wildcat.  If the Hoosiers came up to campus tonight with a truck to steal our fabled rock, I’d think that was actually pretty hilarious (as long as they gave it back, of course).  And I’m happy to admit that one of our most famous alumni is former governor and continuing hair-joke, Rob Blagovich, who recently lost on The Apprentice and is now on his way to a 14 year stint in the federal pen.
But it does piss me off when someone like Zooey Deschanel literally states that she is “too cool for school,” thereby insulting the many really gifted, smart, talented, and yes, “special” students I have taught over the years at Northwestern.
In some respects, I understand Z.D.’s plight.  The freshmen year at college is one of the most difficult years a white upper middle-class person will ever face.  Though not really “cut off” financially, there is still the often frightening illusion of being “on one’s own,” a cruel reality reinforced daily by the need to do one’s own laundry and get to class on time without direct parental intervention.  And then, of course, there is the notorious difficulty of having to reorganize one’s lived social networks, moving from a high school where a person’s identity is pretty much set—for better or worse—to a new environment where everything is up for grabs yet again.
It is a difficult transition for any 18-year old.  But it is particularly challenging for the progeny of Hollywood. I promise, I was utterly clueless about Z.D.’s biography until I looked her up on the wiki this weekend.  There, I discovered that she is the daughter of a Hollywood cinematographer and an actress who was on Twin Peaks.  Her sister, it turns outs, is apparently that Vulcan woman on Bones.
Then it all made more sense.

For some reason, Northwestern seems to have become a “safe house” of late for Hollywood parents hoping to delay, at least temporarily, their child’s descent into the looming quicksand of substance abuse, megalomania, and tick-like sloth that so often comes from growing up in an environment of perpetual wealth and eternal sunshine.  Of course, I'm not saying this is the fate that awaits all Hollywood kids, at Northwestern or elsewhere, just that this group constitutes what might be called a "high risk" community for becoming living terrors.   I guess the logic of shipping them north must be that getting them away from the “bad influences” of L.A. and into a more “wholesome” Midwestern environment will keep the lid on things, at least for 4 years or so.  And what better place than Evanston, Illinois, birthplace of the temperance movement and generally ass-deep in snow five months a year?  If I had a teenage daughter who was out every night until 4am with some twenty-something “junior executive” at Warners, I’d probably pack her butt off to E-town myself.
But imagine how tough it is for someone like Zooey D.  One year she’s attending Crossroads High, Hollywood’s famous gestation chamber for future starlings, taking classes alongside Jake Gyllenhaal and Kate Hudson.  The next year she’s in a dorm room with some merely “average-looking” girl from Iowa who wants to become a surgeon, or a biochemist, or an NGO manager or something equally boring.  Worse yet, she finds out there are a lot of people on campus who don’t know who her mother is, or who Goldie Hawn is, or who have even heard of Twin Peaks. Nor is anyone particularly bedazzled and enchanted by the sight of yet another 18-year-old-girl tricked out in thrift store garb and toting a ukulele around as an attention-getting accessory.  And worst of all, for every minute that her “specialness” is being ignored in Evanston, her social peers back in L.A. are inexorably moving up the ladder of fame to claim what is rightfully theirs (and Z.D.’s!).  I’m amazed she lasted a year, quite frankly.
Then again, maybe I’m just being defensive.  Perhaps the only way to survive at Northwestern is to be as notoriously slow-witted and unspecial as Stephen Colbert (’86), Seth Myers (’96), and Kristen Schaal (’99). 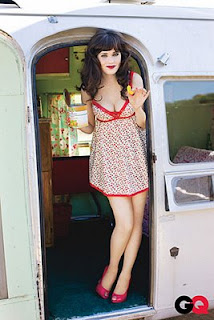 Of course, the Z.D. backlash is not entirely fueled by Northwestern employees and alum, given that it started well before her recent comments to the Daily News.  Here, I think, we must examine the concept of “quirkiness,” a label that, whether intentionally or no, has become Z.D.’s calling card in the popcult marketplace.
What defines “quirk,” exactly, and why do so many loathe those who consider themselves “quirky?”  Briefly defined, quirk is a synonym for the “peculiar,” the “idiosyncratic,” or in Z.D’s words, a state of “specialness.”  To consider oneself “quirky” thus suggests a narcissistic delusion in which one actually believes in the possibility of being peculiar, idiosyncratic, and special when, of course, this is now impossible.
Obviously, every human on earth is a “special” and thus somewhat “peculiar” constellation of historical circumstances, personal background, and psychic inheritance—but once an attempt is made to translate that sense of “individuality” into the marketplace of lifestyle, we all become, sadly, all too predictable vectors of consumer capitalism.  In this respect, “quirk” is the studied performance of not being like everyone else, which of course only infuriates those who recognize that said quirkiness is precisely a performance that implicitly defines itself against everyone else’s “normality.”  And no one appreciates being cast as the beige gestalt that allows the self-perceived “quirky” to stand out in vibrant yet wholly predictable contrast.
You don’t get a gig on a network sitcom by being “quirky.”  You get it by conforming to a recognizable and thus marketable performance of quirk that will attract those who still stupidly believe in the authenticity of the quirky.  Like so many other youth of exceeding, apparently intolerable “specialness,” Z.D. may have gotten her look by raiding thrift stores—but will anyone really be surprised in a couple years if she’s rolling out the new Q-line of teen-wear at Macy’s?  The only genuinely “quirky” fashion statement is one that presents a daily danger of institutionalization by the state, outfits so outside the codes of legible fashion that orderlies with butterfly nets feel compelled to get you off the street before you start biting the heads off pigeons.  Anything else and you’re still just a target market. Most of us just accept that and move on.  Others cling to the illusion that their taste is somehow truly sui generis.

Speaking of which:  Wacky, slightly silly girl in cutesy dresses with a ukulele?  Wasn’t that Victoria Jackson’s old shtick?  To her credit, Jackson has actually crossed over into genuine “quirk,” transforming over the past decade or so into a batshit crazy right-winger.   Want to see real quirk?  Skip New Girl and check out the below:

I am happy to add, in closing, that Ms. Jackson is NOT an alumnus of Northwestern University.
Email Post
Labels: Celebrity Bullshit delusions Fame Narcosis Fatal Strategies Kids on my Lawn Normalization Regional Conflicts Regressive Phenomena Self-Absorbed Defensiveness The TV