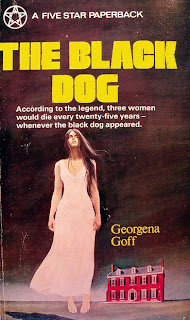 Young teacher and her psychic-researcher boyfriend arrive in small Michigan town to investigate the legend of a multi-generational psychic family.  There they find their subject, "Holmes," presiding over weekly seances where he answers questions for a local circle of believers.  Enter the titular dog.  Each time the black dog arrives on the scene, someone snuffs it.  The young teacher finds herself increasingly under the spell of Holmes, and then her boyfriend starts to behave weirdly as well.