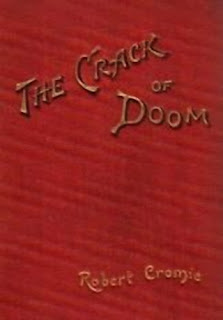 While crossing the Atlantic, the narrator falls in with a strange young man and his beautiful sister.  Invited to join the crackpot's secret society, he is hesitant at first, but decides finally that membership would put him in closer proximity to the young lady.  He is further intrigued when the young woman and her lady friend insist on wearing pants as an expression of their rational, modern thinking.  Though he is embarrassed to be seen with them, even this is not a deal-killer and soon he agrees to join the brother's secret club.

No sooner is he inducted than he learns any revelation of the society's purpose will be punishable by death--a prohibition enforced by the oddball brother's ability to read minds from afar. At first our narrator believes he has stumbled into one of London's reputed "murder clubs" (a la Dickens), but the reality is far worse.  The crackpot brother has found a way to "etherize" matter--late 19th Century lingo for an atomic explosion.  His goal: to vaporize the earth and return it to the ether from which it came.  Why?  Below is the brother's manifesto, a truly great screed of unadulterated nihilism.  Short version--the world must be destroyed because the universe is little more than a ceaseless cycle of meaningless misery.  Read if you dare:

"The optimist notion...that Nature is an all-wise designer, in whose work order, system, wisdom, and beauty are prominent, does not fare well when placed under the microscope of scientific research.

"There is no order in Nature. Her armies are but seething mobs of rioters, destroying everything they can lay hands on.

"She has no system, unless it be a reductio ad absurdum, which only blunders on the right way after fruitlessly trying every other conceivable path. She is not wise. She never fills a pail but she spills a hogshead. All her works are not beautiful. She never makes a masterpiece but she smashes a million 'wasters' without a care. The theory of evolution—her gospel—reeks with ruffianism, nature-patented and promoted. The whole scheme of the universe, all material existence as it is popularly known, is founded upon and begotten of a system of everlasting suffering as hideous as the fantastic nightmares of religious maniacs. The Spanish Inquisitors have been regarded as the most unnatural monsters who ever disgraced the history of mankind. Yet the atrocities of the Inquisitors, like the battlefields of Napoleon and other heroes, were not only natural, but they have their prototypes in every cubic inch of stagnant water, or ounce of diseased tissue. And stagnant water is as natural as sterilised water; and diseased tissue is as natural as healthy tissue. Wholesale murder is Nature's first law. She creates only to kill, and applies the rule as remorselessly to the units in a star-drift as to the tadpoles in a horse-pond.

"It seems a far cry from a star-drift to a horse-pond. It is so in distance and magnitude. It is not in the matter of constituents. In ultimate composition they are identical. The great nebula in Andromeda is an aggregation of atoms, and so is the river Thames. The only difference between them is the difference in the arrangement and incidence of these atoms and in the molecular motion of which they are the first but not the final cause. In a pint of Thames water, we know that there is bound up a latent force beside which steam and electricity are powerless in comparison. To release that force it is only necessary to apply the sympathetic key; just as the heated point of a needle will explode a mine of gunpowder and lay a city in ashes. That force is asleep. The atoms which could give it reality are at rest, or, at least, in a condition of quasi-rest. But in the stupendous mass of incandescent gas which constitutes the nebula of Andromeda, every atom is madly seeking rest and finding none; whirling in raging haste, battling with every other atom in its field of motion, impinging upon others and influencing them, being impinged upon and influenced by them. That awful cauldron exemplifies admirably the method of progress stimulated by suffering. It is the embryo of a new Sun and his planets. After many million years of molecular agony, when his season of fission had come, he will rend huge fragments from his mass and hurl them helpless into space, there to grow into his satellites. In their turn they may reproduce themselves in like manner before their true planetary life begins, in which they shall revolve around their parent as solid spheres. Follow them further and learn how beneficent Nature deals with them.


"After the lapse of time-periods which man may calculate in figures, but of which his finite mind cannot form even a true symbolic conception, the outer skin of the planet cools—rests. Internal troubles prevail for longer periods still; and these, in their unsupportable agony, bend and burst the solid strata overlying; vomit fire through their self-made blow-holes, rear mountains from the depths of the sea, then dash them in pieces.

"The globe still cools. Life appears upon it. Then begins anew the old strife, but under conditions far more dreadful, for though it be founded on atomic consciousness, the central consciousness of the heterogeneous aggregation of atoms becomes immeasurably more sentient and susceptible with every step it takes from homogenesis. This internecine war must continue while any creature great or small shall remain alive upon the world that bore it.

"By slow degrees the mighty milestones in the protoplasmic march are passed. Plants and animals are now busy, murdering and devouring each other—the strong everywhere destroying the weak. New types appear. Old types disappear. Types possessing the greatest capacity for murder progress most rapidly, and those with the least recede and determine. The neolithic man succeeds the palæolithic man, and sharpens the stone axe. Then to increase their power for destruction, men find it better to hunt in packs. Communities appear. Soon each community discovers that its own advantage is furthered by confining its killing, in the main, to the members of neighbouring communities. Nations early make the same discovery. And at last, as with ourselves, there is established a race with conscience enough to know that it is vile, and intelligence enough to know that it is insignificant. But what profits this? In the fulness of its time the race shall die. Man will go down into the pit, and all his thoughts will perish. The uneasy consciousness which, in this obscure corner, has for a brief space broken the silence of the Universe, will be at rest. Matter will know itself no longer. Life and death and love, stronger than death, will be as though they never had been. Nor will anything that is be[90] better or be worse for all that the labour, genius, devotion, and suffering of man have striven through countless generations to effect.

"The roaring loom of Time weaves on. The globe cools out. Life mercifully ceases from upon its surface. The atmosphere and water disappear. It rests. It is dead.

"But for its vicarious service in influencing more youthful planets within its reach, that dead world might as well be loosed at once from its gravitation cable and be turned adrift into space. Its time has not yet come. It will not come until the great central sun of the system to which it belongs has passed laboriously through all his stages of stellar life and died out also. Then when that dead sun, according to the impact theory, blunders across the path of another sun, dead and blind like himself, its time will come. The result of that impact will be a new star nebula, with all its weary history before it; a history of suffering, in which a million years will not be long enough to write a single page.

"Here we have a scientific parallel to the hell of superstition which may account for the instinctive origin of the smoking flax and the fire which shall never be quenched. We know that the atoms of which the human body is built up are atoms of matter. It follows that every atom in every living body will be present in some form at that final impact in which the solar system will be ended in a blazing whirlwind which will melt the earth with its fervent heat. There is not a molecule or cell in any creature alive this day which will not in its ultimate constituents endure the long agony, lasting countless æons of centuries, wherein the solid mass of this great globe will be represented by a rush of incandescent gas, stupendous in itself, but trivial in comparison with the hurricane of flame in which it will be swallowed up and lost.

"And when from that hell a new star emerges, and new planets in their season are born of him, and he and they repeat, as they must repeat, the ceaseless, changeless, remorseless story of the universe, every atom in this earth will take its place, and fill again functions identical with those which it, or its fellow, fills now. Life will reappear, develop, determine, to be renewed again as before. And so on for ever.
"Nature has known no rest. From the beginning—which never was—she has been building up only to tear down again. She has been fabricating pretty toys and trinkets, that cost her many a thousand years to forge, only to break them in pieces for her sport. With infinite painstaking she has manufactured man only to torture him with mean miseries in the embryonic stages of his race, and in his higher development to madden him with intellectual puzzles. Thus it will be unto the end—which never shall be. For there is neither beginning nor end to her unvarying cycles. Whether the secular optimist be successful or unsuccessful in realising his paltry span of terrestrial paradise, whether the pæans he sings about it are prophetic dithyrambs or misleading myths, no Christian man need fear for his own immortality. That is well assured. In some form he will surely be raised from the dead. In some shape he will live again. But, Cui bono?"
Email Post
Labels: 19th Century not bad-pretty good in fact Paranormal radicals sci-fi UK