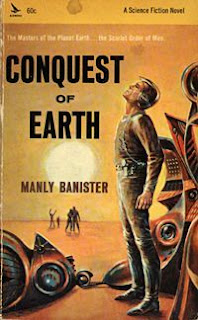 Another saga of underground resistance to intergalactic colonization and more evidence that The Turner Diaries is essentially a science-fiction novel.  Here we have a superhuman in training for a secret brotherhood--capable of time stasis and astral projection--who helps rally a dying earth against an invisible race of resource-sucking aliens known as the Trisz.  As it seems truly depressing that more than one person should have to summarize this book, I will defer to a much more detailed account provided here.

Apparently Mr. Banister is somewhat of an enigma in sci-fi circles.  One site notes that he started as a devoted fan of the genre in the early 1950s, even publishing his own fanzine, Nekromantikon!  Realizing the line between amateur and professional in 50s pulp was pretty thin, Banister soon became a frequent contributor to the various sci-fi serials of the era.  Conquest of Earth appears to have been his only novel. Oddly enough, however, his biggest selling book is The Craft of Bookbinding, still in print through Dover as of 1994.
Email Post
Labels: 1950s mind control pulp sci-fi