Several months ago, the capricious God of corporate mascots threw Charlie Cheetos out of branding heaven.  Landing on earth, Charlie has since wandered the landscape as an ambassador of petty dickery, inspiring otherwise regular people to grossly overreact to perceived slights and minor annoyances.

A young woman is at a busy laundromat, apparently having allowed her clothes to languish after the dryer cycle has completed.  Another patron expresses irritation, "Other people need to do their laundry too, you know."  Miffed, our heroine ponders the horrors of degradation that have led her to such a sorry fate, fighting with the massholes for space at the Duds and Suds.  And then, in the corner, Charlie Cheetos materializes as a CGI angel of bad conscience. "Those are her whites, you know," he says cryptically.  A glimmer of recognition follows and a revenge plot is put into action, one that the psychologically well-adjusted would probably not allow to go beyond a fleeting moment of perverse fantasy.  Pushed "over the edge" by the intense high proffered by her profligate ingestion of orange-dyed "cheese-like" dust, our striped laundress places a handful of Cheetos in the woman's tumbling sheets and pillowcases.  The physics of heat and rotation insure a chemical hazard that will produce hundreds of dollars in damages, or at the very least more time at the dreaded laundromat.  The deed done, she looks back to her accomplice--but Charlie Cheetos is gone.  Was he ever there in the first place?  Perhaps she has taken her first step toward the thrill of self-empowerment that comes through snack-related vandalism.  Perhaps she has had her first hallucination.  It is difficult to say.


In other adventures, Charlie "appears" on an airplane encouraging an irritated passenger to stuff Cheetos into the nostrils of a man who, through no real fault of his own, has demonstrated the temerity to snore on a long flight.  Elsewhere, Charlie incites a young office droid to ruin the workspace of his fastidious and we must assume "uptight" co-worker by grinding Cheetos into his laptop, ear-buds, and business cards. When Jim from The Office does stuff like this, it's hilarious: here it just seems to be the work of a smug sociopath.


No doubt about it--Charlie Cheetos is a dick, and you can be a bit more dickish by sampling his wares.  In fact, if you follow Charlie down this path, Frito-Lay will gladly embrace you as a  member of the "Orange Underground"--an exceedingly hip and exclusive movement that only those with 99 cents and enough arterial dilation to make it to the corner market are allowed to join. 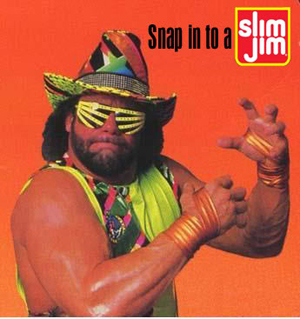 I suppose these ads excite Cheetos consumption in one of two ways: 1). It is a well-known fact in food merchandising that young men in particular enjoy consuming things that they fantasize might kill, injure, or at least offend those around them.  Del Taco's Macho Burrito.  The Big Carl.  Slim Jims. Variously  "exploding" candies and gums. Here Cheetos provides a somewhat more subtle variation on the obnoxious foodstuff theme, taking a couple of moments to create a villain who at least "deserves" some form of retribution, even if it the transgression is as seemingly slight as snoring, keeping the office clean, or observing that you have left your panties abandoned in the dryer long past the final cycle.  And really, in a world where the indignities of a failing empire make all of us increasingly petty and aggrieved, these assholes are lucky they didn't get shot or stabbed.  2). Related to proposition one, Charlie Cheetos' corporate puppet-masters are encouraging us to think of Cheetos as a refreshing "break" from the daily grind.  If Pepsi was the "pause that refreshes," Cheetos is apparently vying to become the "pause that avenges;" in fact, to marry these two aspects of the campaign, I hereby offer Cheetos the following bitchin' tag line: "Cheetos: Reap the Pawz of Vengeance."  As for typography, I'm imagining slashing, blood-red razor claw cuts outlined in the product's signature radioactive orange, somewhat akin to the chaotic lacerations of a crankhead attempting to rub crystal meth directly into his wounds. 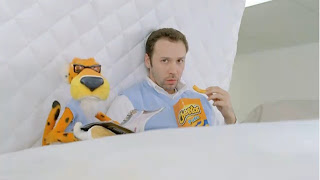 Lately, however, Charlie the fallen feline angel of cheese-dust and batter blobs has seemingly been demoted.  In the first round of ads, he apparently retained the supernatural powers of Lucifer--magically appearing whenever he sensed a bag of Cheetos opened in anger.  Unimpeded by an angel of tofu or whole-grain Triscuits or some other more healthy snack entity, Charlie was free to goad his consumer target into transforming a passing moment of irritation into weeks of jail time.  But now Charlie himself appears to have been demoted into the mundane world of alienated daily labor.  In one spot, he and a bored co-worker at a bedding store temporarily exclude a third employee from their mattress fort.  Oddly, as in the laundry spot, there is a distinct contamination vibe as it appears inevitable that the two men and the powdered cheese-cougar will soil the mattresses with their slovenly snacking. Psychological research no doubt suggests this makes the Cheetos' consumer feel vaguely "naughty," as if he has regressed to earlier childhood transgressions but will now emerge victorious by eating what he wants when and where he pleases. 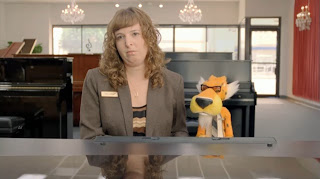 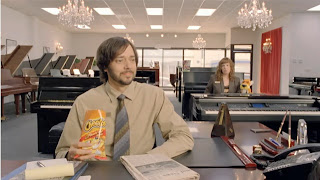 In a second spot, Charlie has apparently ridden the rails to another town and picked up work at a piano store.  Here he passes the interminable hours of boredom playing "Chopsticks" with another co-worker.  A third employee, driven to the point of madness by  the incessant repetition of this evil finger exercise, asks if they know how to play anything else.  It seems a reasonable request.  But Charlie and his partner live in the "Orange Underground" and thus play by a different set of rules.  They resume playing "Chopsticks" an octave higher than before, making it even more shrill and irritating.  What is particularly disturbing here is that the worker tormented by their playing is already eating a bag of Cheetos; he has in fact already acceded to the marketing demands of the Orange Underground, leaving us to ponder just what form of tribute Frito-Lay would actually find acceptable.  Perhaps he needs to dump the entire contents of a Cheetos' Flamin' Hot "Super-Grab" into their most expensive Steinway...only then will the Gods of dickery be appeased. 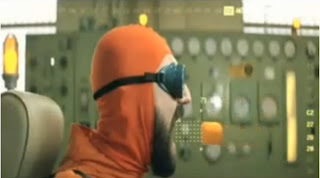 Charlie's recent demotion from magic trickster to itinerant strip-mall salesman is even more puzzling given that only a few months ago he was apparently the Head of R&D at some high-tech snack testing facility, working to find new and more diabolical ways to make Cheetos even "hotter," "crunchier," and more "obnoxious" than before.  What happened?  Did Charlie create a Cheeto so thoroughly devastating that it actually killed someone with its intense awesomeness? Did someone finally choke to death on one of those "Giant" Cheetos (aka: product that passed through the regular Cheetos cutting assembly unscathed)?   Or, like so many others, was Charlie simply laid off, searching now for whatever work he can find despite having advanced degrees in both chemical flavor engineering and outrageously cool attitude?
The ad firm behind these various campaigns boasts they were charged with "re-branding" Cheetos--a perennial favorite of young children who also enjoy sticking carrots up their noses--for an "adult" market.  So remember the lesson well: Adult = being easily conned by artificial coloring, salt, and a hallucinatory cat into believing that Cheetos hold the key to regaining a rebellious "underground" attitude, one that embraces the discourteous, self-centered childish asshole within that you spent so many years attempting to outgrow in your quest for adulthood.  One Cheeto and you are right back on the playground, giving that kid you never liked a shove off the swing set.
Email Post
Labels: Bio-Horror Commerce Overstimulated Consumers Rapid Ingestion Regressive Phenomena The TV