As we open, Suzanne and her husband Doug are in court finalizing their divorce.  This all seems a bit suspicious in that the proceedings involve two lawyers squaring off Perry Mason-style in front of a judge.  Suddenly, the husband's lawyer produces a 16mm film projector and screens a stag film...starring Suzanne!  Case closed. 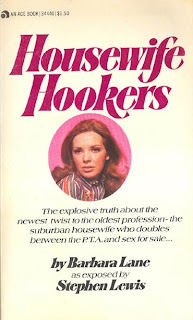 Leaving court, Suzanne ponders what led her from a comfortable middle-class life in Valley Stream, New York to turning tricks in Manhattan.  Boredom, mostly.  She and Doug were once truly in love, but eventually Doug cared more about his career than her "needs."  After a particularly nasty fight one evening, Suzanne drives into Manhattan and parks on West 52nd Street to clear her head. Unbeknownst to her, at least at this point, is that W. 52nd St. is the city's premiere destination for picking up hookers parked in cars.  Before you know it, Suzanne scores her first John...and she likes it!

Great reading for any man of the era who wanted to believe that hoards of Long Island housewives were in fact thrilled to commute on the L.I.E. every day to have anonymous sex with midtown businessmen.
Email Post
Labels: 1970s New Yorkitude sex trade Sleaze