Seven Wives and Seven Prisons Or Experiences in the Life of a Matrimonial Maniac. A True Story. (1870)

Young lad in the early 19th century gets married, has a couple of kids, discovers his wife is having an affair, dumps her, doesn't sign necessary paperwork for divorce, falls for new new girl, parents object, elopes, sires son #2, arrested, jailed, convicted, escapes, tries to kidnap wife 2, has to flee, falls for new woman, etc., etc. 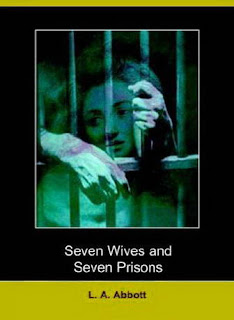 The book does not lie.  The self-proclaimed "matrimonial maniac" gets married to seven different women--the middle five of whom are all "illegal" in that he never secured an official divorce from wife #1 (my "worst wife," as he calls her).  In between the author spends a lot of time in jail awaiting various bigamy trials, escapes numerous times from jails large and small, does 3 years of hard time in Vermont, sets up about 15 medical practices, tours the countryside selling patent medicines, hires himself out to accompany "insane" patients in extended traveling cures, goes to New Orleans just before the Civil War, and tries to kidnap one of his kids.  Eventually comes to the realization that he is indeed "monomaniacal" when it comes to marriage (perhaps after one "wife" claims they are married when one night, while drunk, they fill out a marriage license as "a joke").  Wife number 7 seems to take, however, and we end with our author wealthy, contented, and still hitched.

Generally comic in tone, despite the fact that the author spends some 30 years of his life paying for the lazy bureaucratic oversight of not officially divorcing "worst wife."  Interesting too for its portrait of 19th century "courtship" practices: predatory widows, packs of brothers standing guard over a lovestruck sister, lovers masquerading as cousins so as to stay in the same hotel.  At one point, the author decides to go to Maine for no other reason than it was the one state in New England wherein he had never been "arrested or married."
Email Post
Labels: 19th Century boy energy true crime