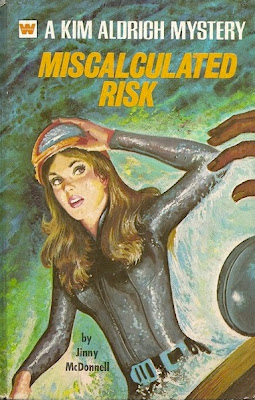 Given the immense popularity of the Hardy Boys and Nancy Drew, publishers understandably spent much of the 20th century searching for new teenage mystery franchises.  Miscalculated Risk is the first of four books from the early 1970s featuring the adventures of Kim Aldrich.  Whereas most of the previous girl sleuths had been in high-school, Kim is a career girl, of sorts, working as a secretary for the World at Large Insurance Company (WALCO).  Incredibly, in her first adventure, Kim dedicates herself to solving a case of insurance fraud.  Yes little girls, insurance fraud.  A mayor refuses to settle a case involving a little boy injured by falling off some rocks at the beach.  A sign clearly warns people to stay off the rocks, says the mayor, so he will not settle the claim.  But Kim figures out that the sign went up only after the little kid fell down and paralyzed himself.  Fraud!

If exposing everyday cases of municipal malfeasance are the kind of adventures you imagined having as a 13 year old girl, Miscalculated Risk is the book for you.  Given the strange premise of this series, one has to wonder if Kim was in fact a subtle conservative response to the demands of second-wave feminism sweeping the nation at the time.  See girls, you too can having exciting adventures...as a secretary at an insurance company!
Email Post
Labels: 1970s mystery teens what girls think about Whitman