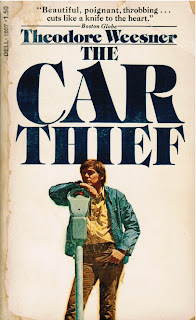 I'm happy to report that slogging through stacks of old, orphaned books has at last paid off with a real gem.  The Car Thief apparently sold nearly a half million copies when first published in 1972, but damned if I had come across it before.  The back cover of the paperback features one rave review after another, making this book's relative obscurity now all the more curious.

With the opening of the new school year, 16 year-old Alex Houseman begins stealing cars for reasons even he doesn't really understand.  Mostly he just drives around Detroit and nearby small towns in Michigan, hanging out in front of other schools and other diners.  Sometimes he drives by the house where his little brother now lives with their mother.  Back at home, Alex shares a life of day-to-day instablility with his alcoholic father, an auto worker who vacillates between drunken neglect and sentimental regret.  Eventually the law catches up with Alex and sends him to a boy's home to await an important court hearing--one that could either send him back home to Dad or down to the real jail in Lansing.

As we approach the end of Alex's trials and tribulations during his junior year,  there is the sudden realization that the novel is really about something else entirely--but I won't spoil that for anyone who might actually want to seek this out and read it.

A very sad and somewhat spooky book--highly, highly recommended to anyone who at some point in his or her life ever just drove around aimlessly for lack of anything else worth doing.
Email Post
Labels: 1970s j.d. judged exceptional teens