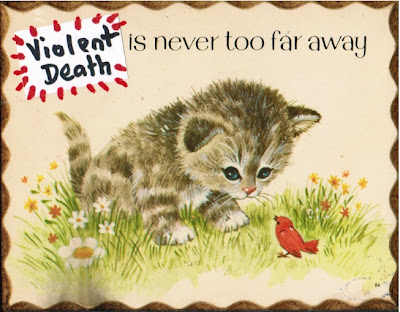 Anyone who has ever let a cat loose in a speeding car knows that it is a situation fraught with both humor and terror.  It’s funny because the cat, accustomed to performing a cool mastery over all he surveys, suddenly finds himself riding an adrenaline spike of panicked incomprehension.  Where am I, why is everything moving so fast, and why am I about to hurl?  These are the amusing questions we image kitty asking himself as he hunkers down on the floorboards making that yowling sound that portends Satan’s imminent materialization in the glove box.  This is hilarious, of course, because as humans we have a superior knowledge of the situation, and as the “winners” of the evolutionary sweepstakes, we are entitled to take occasional amusement from the frantic confusion of our hapless companion animals, especially ones that devote so much time to implicitly mocking our Darwinian “victory” by eating and sleeping all day.

Of course, if terror-cat is not immediately returned to his carrier, inverted laundry basket, or leg chains, he will in his agitated state eventually worm his way under the accelerator and/or brake pedal, as if to say, “so you think this is funny, dipshit?  How ‘bout I kill us all by forcing you to rear-end that truck carrying the giant sewer pipes?  By my count I have 5 maybe 6 more lives left, see if I give a f*#k. You think we have some special relationship, but any idiot can be conned into feeding me and shoveling my shit, especially after I’m way famous at the pound as the adorable survivor of that horrific pile-up on the beltway.”  Suddenly you are riding the adrenaline spike, imagining your embarrassing obituary circulating among family and friends: smug college-graduate boasting of self-proclaimed above-average intelligence killed after small mammal defeats restraint protocols, opens car throttle to maximum, forces Toyota off bridge and into ravine. 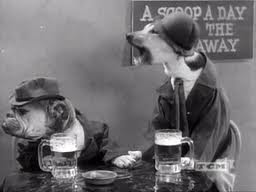 Dogs appear to enjoy being in the car.  In fact, dogs appear to enjoy being wherever we are, even if it’s an STD out clinic.  As they will gladly eat their own shit, dogs are also incapable of humiliation.  More evidence that dogs aren’t really funny.  The best one can hope for in dog humor is an inopportune humping or a klutz like Beethoven digging up a stuffy neighbor’s prize flower garden.  Dog humor is the humor of small children, wholly mediocre, unexceptional small children.  Skeptics might point to the MGM Dogville comedies of the early 1930s in which a cast of actual dogs performed parodies of recent motion pictures.  To this I would say, imagine how much more hilarious those movies would be if they featured cats.  Cats are Keatonesque in their stolid endurance of life's ongoing indignities.  Dogs, on the other hand, evoke the sentimental claptrap of Chaplin.  Somebody has probably already made that distinction.  No matter.  It is worth making again.

The poetics of feline humor figure in two recent high-profile Hollywood comedies, Talladega Nights: The Ballad of Ricky Bobby (2006) and The Hangover (2009).  Each features a comic set-piece involving the protagonist(s) trapped in a car with a large and ferocious "big cat."

As the demands of aesthetic evaluation compel a rendering of judgment on all things belonging to recognizable categories, we are forced to consider which of the two films is the more successful in bringing “trapped in a car with a cat” humor to the big screen.

The set-up:  Ricky Bobby (Will Ferrell) is a top NASCAR driver who loses the ability to compete after a bad accident at the track.  Under the tutelage of his long absent white trash father (Gary Cole), Ricky embarks on a series of “training” exercises to regain his racing chops. In one such exercise, Ricky must drive a car while locked inside with a wild cougar.


Choice of cat:  Why go big?  For the humor to work here, the chosen cat must be truly terrifying.  The scene might have worked through a logic of multiplication, if say Ricky Bobby’s father had challenged him to drive with a “messload o’ housecats” in the passenger cabin, but this would have required Ferrell to play the scene more as an escalating annoyance, batting away tabbies and torties as he attempted to keep the car on the road.  The invocation of a cougar here is also appropriate in that cougars did at one point roam the hills of Appalachia and the American south, its inclusion here supporting the movie’s subtle history lesson on the origins of NASCAR culture.  A lion, for example, while perhaps more terrifying, would not carry this echo of regional authenticity.  One can even imagine that an unlucky moonshiner in the 1930s did once discover a cougar in his backseat, leading to a local legend that somehow eventually made its way to screenwriters Ferrell and Adam McKay.


Execution: Much of the humor here stems from knowing in advance that the cougar is already in the car.  Ricky Bobby must steel himself for his encounter with the ferocious animal, which we assume will not go well.  This prelude is made even more amusing by Ricky Bobby locking eyes with a prosthetic cougar head that follows Ferrell’s every move before he gets into the vehicle (right).  The inevitable cougar attack itself proves somewhat anti-climatic.

The set-up:  In Vegas for a wild bachelor party, a trio of man-boys awake with no memory of the previous evening and a tiger inexplicably locked in the bathroom of their hotel suite.  Later, they discover the tiger actually belongs to boxing legend Mike Tyson, who under threat (and execution) of violence demands they return it to his compound.  After dosing the tiger with left-over Roofies, the trio begin driving across town to take him home.  The tiger awakes prematurely and comically terrifies all involved. 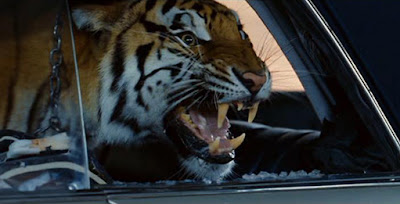 Choice of cat:  Feline choice here is largely motivated by plot and setting. A story of Vegas, the film really only has recourse to lions or tigers.  Of these two species, tigers are by far the more terrifying.  While male lions might be the “king of the jungle,” they often appear slow and soporific.  They might kill you, but they just as easily might lie back down for another nap.  Tigers, on the other hand, seem dedicated to remaining in a constant state of lethal aggression.  Tigers are so magnificent, in fact, that they reveal the domestic house cat for the evolutionary prank that it is.
Execution:  The Hangover, which overall is a very fine comedy offering, loses some points here for the execution of the gag.  The tiger in car scene is staged so that the viewer is the first to realize the tiger has regained consciousness.  We see its head rise up from behind the seat as the man-boys continue their conversation, oblivious to the impending mauling.  However, given that the movie has already established that it will proceed as an escalating chain of unfortunate complications, we are well aware that the tiger will wake up even before the boys get it into the vehicle.  There are really only two ways out of this conundrum, neither of which is very appealing: (1) In a switcheroo, they could have discovered that some other animal had unexpectedly found its way into the car, perhaps a monkey, or bat, or another equally inconvenient creature; (2)  They might have found themselves inflicting further harm on the tiger, thereby incurring future comically violent repercussions from the volatile Mike Tyson—but this cruelty to the tiger would have done much to diminish our sympathy for their plight.
Final Analysis:  The clear winner here is Talladega Nights.  More uneven overall, perhaps, the film is clearly superior in staging its “big cat” encounter.  Much of this superiority, no doubt, stems from the cougar enjoying some degree of agency, in as much as it seems to relish the prospects of ripping off Ricky Bobby's face. 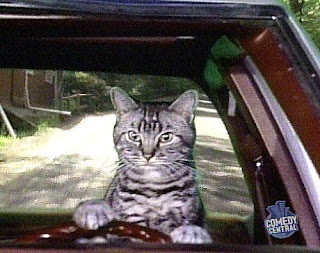 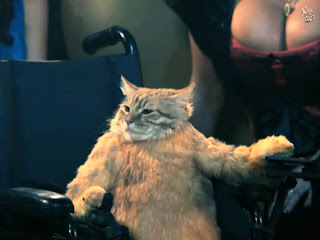 A Historical Note:  I would be remiss here not to mention the continuing influence of Toonces the Driving Cat, a beloved recurring character on Saturday Night Live who made 12 appearances between 1989 and 1994.  Toonces, if you will recall, was capable of actually driving a car, but “not very well.”  Evoking the somewhat common experience of witnessing erratic cat behavior in a moving car, Toonces is funny not simply because he can drive, but also because his focus and attention to the task is in such contrast to the typical cat-in-car scenario.  In a second reversal, of course, each Toonces' sketch ends with an inevitable reaffirmation of the initial hazard, the cat driving himself and everyone in the vehicle off a cliff.


I don’t know who Nick Swardson is or why Comedy Central has entrusted him with a series, but he continues the legacy of Toonces prop/cat comedy in "Wheelchair Cat: Trust Fund Kitty."  In what will apparently be a recurring bit, "Wheelchair Cat" tells the story of a cat who inherits 10 million dollars and is then paralyzed when a jealous human relative attempts to run him down with a car.  Now confined to a wheelchair, the cat spends his time getting high and clubbing every night with a bevy of beautiful women, firing off various obnoxious retorts through a "Stephen Hawkings" voice computer.


Whatever the quality of the writing for each individual installment of "Wheelchair Cat," the bulk of the humor obviously derives from the strength of the cat's performance (above).  As anyone with even a passing familiarity with cats understands, they do not appreciate attempts to force them into certain situations, behaviors, or outcomes--be it taking a pill, using a scratching-post, or remaining encased for hours in fake cat suit.  As the photo still above illustrates, much of the humor here is in seeing just how little the cat enjoys having his head poked through the top of this elaborate prop.  So, even if the lines given to a cocaine-snorting playboy tomcat are less than funny from week to week, the ongoing assault on this orange Tabby's time, will, and dignity remains a source of foolproof comedy gold.

For additional driving cat fun, check out the video below: