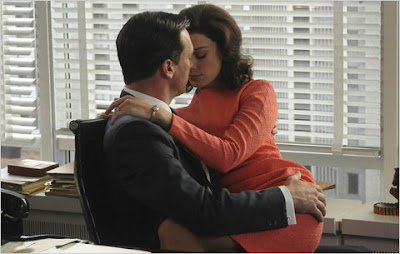 A lot of people have been squawking the past week about the season finale to Mad Men, apparently upset that Don Draper has “chosen” Megan over Faye.  The general line appears to be that by proposing to Megan, Don has  “regressed” in a program of personal actualization and/or redemption that has, for some, become the central through-line of the series.  The enlightened position is that Don Draper must be “reformed” in some way, even if such a reformation merely recapitulates the even more suspect ideological logic of the romance novel (“bad boy” redeemed by the love of a good woman) that critics used to find equally loathsome.  Don and Megan’s engagement is thus a betrayal of some kind, both to Faye and the audience.

I am somewhat confused by this response.  I will admit I missed a couple of episodes this season, so maybe I didn’t see the surprise preamble in which Matthew Weiner appeared on screen to announce the series would be changing focus from a melodrama to a didactic parable of modern masculine redemption set in the 1960s.  I’m not exactly sure what these people expected (or more accurately desired).  Was Don supposed to marry Faye, quit advertising, and then run some kind of male-sensitivity seminar at the local Ramada?    If he did, would we still watch every week?  Is there so little self-knowledge in this segment of Mad Men’s audience that they have completely disavowed the show’s appeal to a complicated fantasy of an earlier socio-sexual imaginary?

If you want to get angry, get angry that anyone had to make a “choice” of any kind in this scenario.  Mad Men is politically “bad” in some sense because it paired Don with the young French hottie over the age-appropriate professional peer, and yet there is little interrogation as to the imperative of heteronormative monogamy that demands Don must legally pair up with something in a skirt by season’s end.  If one is going to play the weird game of judging fake people living in cartoons of distant historical eras by the yardstick of contemporary gender politics, shouldn’t we be more riled by the unexamined logic that all of them—Don, Megan, and Faye—can only be happy if they get married and squirt out a few more Nassau County trust fund kids for the 1980s?  Don Draper is an incredibly handsome and fairly creative man with an apartment in the Village in 1965.   As long as we’re all going to share how imaginary Don’s imaginary choice has impacted our own structures of real desire, then let me say how much I feel betrayed and aggrieved Don isn’t burning his suits, putting on a black turtleneck, and using his semiotic skills in the service of the Situationist International.

But that would be a different show, as would be the series proceeding from Don achieving some kind of emotional maturity by marrying his evil doppelganger in the “let’s hoax people into buying shit they don’t need” industry.  Why don’t we just cut to the chase and move the storyline all the way to 2010 with Don, now a widower in a nursing home, explaining to all his blue-haired admirers about what a womanizer he used to be...that is until he met Faye, who "completed" him in such a way that his show got immediately canceled.

Again, it is silly to continue arguing along these lines inasmuch as the characters on Mad Men are not actually real people and the things that happen to them are of no real consequence in the real world (in a related development, I am really pissed that whoever is writing that Haiti disaster show decided to give everyone cholera this week—bad move, I say).  But, I can play that game as well as the next person overly invested in confusing story-bait with actual day-to-day human interaction, so speaking as someone who is often asked to perform the role of a male in real life, let me walk you through the objective textual evidence that demonstrates Megan was the perfect and inevitable narrative destiny for a hallucinated white-collar executive pretending to live in our imagination of ‘60s Manhattan.

I think we can best do this by considering the two narrative product lines offered by Faye and Megan, and why Megan according to all wholly objective criteria is the better choice. Hair color:
This may seem like a superficial place to begin adjudicating the crucially important decision of with whom Don Draper will chose to have a fictional relationship, but in many respects, hair color holds the key to the narratological-ideological overlay guiding Don’s imaginary penis.   Put simply, brunettes are empirically, demonstrably sexier than blonds.  That’s just the sad truth for any of us who have hair that reflects more light than it absorbs.  Yes, many blonds have been celebrated for their purported sexiness over the years, but it all pales before the dark locks of the mysterious brunette.   Generations of painstakingly verified sexual research, data gathered in real life and then transported directly to the screen, demonstrates that dark hair equals enigmatic depth and erotic unpredictability.  Blonds, on the other hand, are generally all surface--earnest and well-meaning perhaps, like Faye, but ultimately much less interesting.  We may discover next season that Megan is bat-shit insane, but it will most likely be a thrilling madness of carnal abandonment rather than the neurotic repression of the classic “Hitchcock Blond” that is Betts, and by hair-color extension, most likely Faye as well. 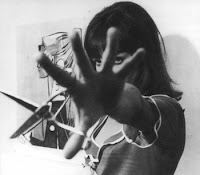 Megan is, of course, French (Canadian).  She is French (Canadian) in the 1960s.  She is French (Canadian) in an era when being French still meant you had access to sensual and sexual knowledge that would kill the average American man.  Don Draper is no average man.  He deserves a French (Canadian) wife. Megan’s French-Canadianicity, meanwhile, also allows for expanded business opportunities.  Don’s work at SCDP cannot help but benefit from fictional trips to a stylized 60’s Paris Toronto, then still an epicenter of international design and artistic innovation.  Who knows, perhaps in a flattering gesture to Mad Men’s target demo, Don can run into Godard McLuhan (or a close facsimile thereof) to discuss the ethics of the image in consumer capitalism.  Faye, on the other hand, while offering some potential strategic synergy for Don’s business, is just as likely to be a source of complication and conflict.  Really, why would someone want to be TV-married to someone who simply replicates all your own plots?


Red = secondary revisions based on my own apparent secondary revision of Megan's French-Canadian heritage.  I am also aware that Toronto is in Ontario and not Quebec, but McLuhan strikes me as the most fitting Canadian analogue of Godard circa 1965.
ADVANTAGE: TEAM MEGAN

Breeding Stock:
Many are upset that Don opted for someone much younger than himself.  But consider the following: Don Draper is a man’s man, an alpha male of the first order.  Painfully handsome, he had the smarts to escape from the boondocks, outfox Uncle Sam to get out of Korean, and then rise from haberdasher to the executive class under an assumed identity.  He is an extraordinary specimen of manhood, and as such, his seed must be spread as freely and copiously as possible.  While a couple of more little Drapers are probably possible with Faye, Megan is poised to produce an entire basketball team of achingly gorgeous boys and girls to supplement the genetic line he has already produced with Betts. 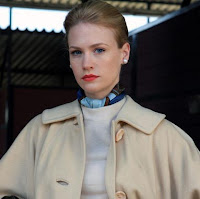 Parenting Skills:
One of the ongoing issues in Mad Men is the rampant “evil mothering” of Betts, who appears hell-bent on transforming Don’s adorable daughter Sally into another frigid she-beast haunting the Westchester bridge circuit.  Megan, by contrast, is quite proficient at wrangling children, both physically and emotionally.  Really, after Megan proved so adept at soothing runaway Sally’s abandonment complex—in stark contrast to Faye’s “I built a career rather than competent mothering skills” awkwardness—was there really any doubt Don would choose her?  The trip to California only cemented this advantage, Megan proving herself capable of keeping the rugrats out of Don’s hair while he attended to his important man business—hauling them back and forth to the swimming pool, teaching them adorable French songs, and still having the time and energy to go clubbing for a night at the Whiskey a Go-Go.  The “milkshake” scene sealed the deal.  An accident that previously would have caused months of brooding and ill-will in the Draper household is literally rewritten here as “there is no use in crying over a spilt milkshake.”   We know how Betts would react in this situation.  Faye no doubt would have asked everyone how they felt about the spilling of the milkshake.  Megan just wipes it up and moves on.

Profession:
Megan is merely a secretary, while Faye is a Ph.D. who has established her own successful career as a market researcher.  But as anyone with a human soul recognizes, market research is a horrible, shameful profession, worse even than pimping, drug-dealing, or loan-sharking.  If the scene with Faye pretending to befriend the steno pool at Sterling Cooper so as to extract skin care data from them didn’t chill you to the bone, perhaps you’re not human either.

But what of Don?  He’s involved in advertising, and that’s really no better, right?  That’s true.  But Don has been the breadwinner in his family, having to support Betts and 3 hungry children, so he is to be excused if he must behave unethically from time to time in order to earn a living.  Faye, meanwhile, is certainly attractive enough to have earned the attention and wedding ring of a well-off man.  There’s really no need for her to work in the first place, thus making her zeal in contributing to the further alienation of mankind under consumer capitalism all the more horrifying.

So as you can see, Faye never had a chance.  And certainly none of this could have been a surprise to anyone.  From the moment Peggy’s lesbian gal-pal and her Warholite crew came up to reception for the explicit purpose of checking out Megan’s radiating hotness, there was little doubt she was to be Don’s seasonal destiny.   Remember, in television, like high school, the hottest guy and hottest girl always somehow find each other.

And finally, for all those who think this was a “misstep” of some kind, just look at how much vitriolic discussion it has provoked over the past week.  Face it, you got played like a well-greased fiddle, a point that should have been obvious when the outrage over Don's choice was already written into the story world as auto-critique.  Why else were we given the scene of Peggy and Joanie smoking cigarettes and bitching in the wake of Don’s big news? But don’t worry.  As this is a MELODRAMA, logic dictates that Don and Megan—no matter how well-suited for each other—will be dodging monkey wrenches left and right next season, punished for not embodying a structure of desire judged acceptable by Mad Men’s contemporary audience.  Still, we should remember that the primary function of Mad Men is not to "reform" Don, but is instead to compel people to keep watching Mad Men every 8 months.  Melodrama, after all, is about caricatures placed into violent collision.  Given the unpleasant reminder that Mad Men is more Peyton Place than Fredrick Wiseman, can anyone really say they would rather spend next season watching Don and Faye embark  on a boring voyage of emotional stability and mutual respect?
Email Post
Labels: Moral Panics Normalization The TV