Charles Alex
Arco Publishing Co.
A guide to performing well on personality tests--commonly administered by prospective employers in the '60s and '70s--that begins with the surprisingly refreshing premise that all such tests are fundamentally idiotic.  Author Charles Alex thus promises to coach the reader in how to "perform" a proper personality in order to ace the test and land the job.

Here are two easy ones:

If you check "true" on the first question, or "often/occasionally" on the second, "you will be disqualified outright."

Alex also warns the reader to look out for "truthfulness" questions, items designed to see if the subject plans on faking his exam.

If you answer "true" for this item, the assessor will simply assume you are lying and will score you accordingly.

You are also advised to demonstrate an interest in religion, but not an overly active interest.

If you answer "yes," you will be judged a "non-conformist" and "intellectual," both of which constitute obvious grounds for "disqualification."

If you answer "yes" here, you signal that you are "excessively" concerned with religion.  So, though you might be tempted to think this makes you look good, it's actually a red flag.

Alex also gives you clues to ferret out those questions designed to discover if you might be psychotic.  Most of these are obvious, like "I have communicated with God:  YES   NO."  Others less so: "I have read the works of the Marquis de Sade: YES  NO."

Advice is also offered on how to pass "open ended" questions, figure drawing exercises, and "ink blot" tests.  Intriguingly, the advice here is to seem as boring and gender normative as possible.  If asked to draw a human figure, for example, Alex reminds you to draw someone of your own gender.  If you are a man, you should draw a "normal" looking guy in a suit (that takes up the entire page---drawing a tiny person means you might be a psycho!).  Incredibly, if pressed to draw a second figure of the opposite gender, a man is expected to draw a woman in the nude.  No advice is given to women in this situation, perhaps because the idea of female job applicants sketching out dinguses was just too disturbing for the author to contemplate. 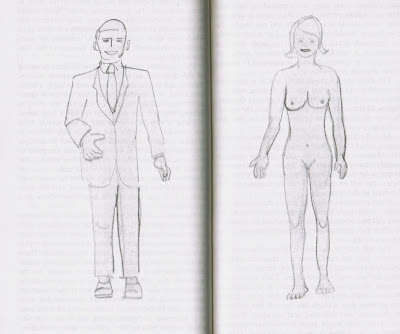 If asked to write a story to accompany a picture, Alex advises saying as little as possible.  If pressed by the examiner, expand the tale only a little bit at a time and be sure not to demonstrate any actual creativity as this will be interpreted as a sign of homosexuality!  In fact, Alex recommends throughout that men should never demonstrate an interest in art or culture of any kind...only sports.

More depressing evidence of how our society kills us all a little more every day.
Email Post
Labels: 1970s advice mind control