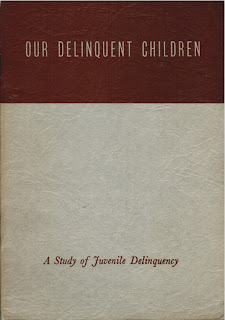 Institute of Crime Prevention
Popular lore has it that juvenile delinquency only became a recognizable problem in the 1950s, stirred up in the wake of Marlon Brando's iconic performance in The Wild One (1953).  Truth is, however, that young punks were causing trouble for decades previously, making the reform of wayward youth a Progressive priority since the turn of the century.  Countering the many stories of young bootstrapism by Horatio Alger was The Jack Roller: A Delinquent Boy's Own Story (1930), an "autobiographical" account of a young man's criminal initiation on the streets of Chicago in the twenties.

A pocket-sized 26 pages, Our Delinquent Children appears to be a pamphlet that teachers, social workers, and other civil employees could distribute to concerned parents.  Delinquency, we learn in 1946, is already a terrible problem and getting worse.  80% of boys appearing in court are charged with stealing.  Girls don't steal, claims Landrum, but are typically brought to court for "running away, insubordination, and sex offenses."   Somewhat predictably, the "causes" of delinquency are mostly Mom's fault:  "working mothers" and homes broken by divorce and/or desertion.  The overcrowded  living conditions associated with poverty are isolated as another cause.  All of Landrum's data, it should be noted, derives from a study of delinquency conducted in Macon, Georgia.

There would soon be a tide of these delinquency studies, leading to an entire genre of filmmaking that for the most part simply translated these facts, figures, and theories to the screen.  Crime in the Streets (1956), for example, stars John Cassavetes as a young tough living in precisely the conditions described in Our Delinquent Children.  On the verge of graduating from petty crime to murder, Cassavetes is saved in the end by the persistant and consciencious efforts of a local social worker (James Whitmore) who won't give up on him.

Of course, in today's era of fascistic neo-liberalism, we have at last found the courage as a society to give up entirely.  If the "delinquent" are to be "reformed," somebody will have to first figure out how to make a profit from it.
Email Post
Labels: 1940s hygiene j.d. teens true crime