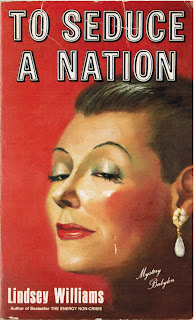 Worth Publishing Co.
More evidence that the "Tea Potters" have been a-brewin' and a-stewin' for a long time now, just waiting for their day in the electoral sun.  Anyone with the taste and refinement to be reading this blog probably hasn't fallen for the Tea Party line that their movement is only about government spending, that there is no "social agenda" behind all the funny hats and not-so-funny signage.  But if you need more convincing, here is the book for you.

Baptist minister Lindsey Williams lays out the history and the problem.  This country, he argues, was founded by hard-working, extremely religious pilgrims who despised laziness and frivolity. When it came time for the Revolution, the founding fathers were smart enough to realize that all democracies will eventually fail because the "wealth-consumers" will always outvote the "wealth-producers." Politicians will thus start pandering to the welfare leaches (like FDR did for widows and children during the Depression) until the nation approaches bankruptcy, a process made worse as vast legions of "Bureau-Rats" become dependent on the public coffers for a living.  This is why the United States Constitution calls for a Republic and not a democracy.

But somehow millions have come to suck at Uncle Sam's red-white-and-blue teets anyway.  Who is the enemy and why did this happen?  She's on the cover, the "whore of Babylon," and in the American context she consists of three components: 1) religious Babylon--America is now full of non-Christians; 2) political Babylon-- a false interpretation of the First Amendment as the "separation of church and state"...not true, remember those pilgrims?; 3) monetary Babylon-- America has unwisely abandoned the Gold Standard.

Williams goes on to make the favorite argument among this crowd that one shows obediance to God by resisting all laws that are not Constitutional. Chief among the unconstitutional things that must be destroyed is the Federal Reserve.

With its "original intent" approach to both the Bible and the Constitution, the book provides fascinating insight to that segment of the population that looks to textual stability and moral certainty as a means of resisting the inexorable process of social change.  Eve ate an apple, the "founding fathers" hated the rabble, FDR was an effete Satanist, and that's that.  No matter what challenges face the nation in 1984 (or today for that matter), they can only be solved by the literal interpretation of words written in the late 18th century.

Chillingly, Williams ends by laying out his three-part program for "taking the country" back.  Step one: take over the House of Representatives.
Email Post
Labels: mind control politics religion wingnuts