Gerald Kramer
Midwood Books
Tony and Mario are brothers.  After their father dies, Tony goes to work as the manager of a swanky Italian restaurant in Manhattan to help support the younger Mario in finishing college.  But Mario is more interested in girls.  Lots of them.  Tony, meanwhile, is engaged to the lovely Gina.
One night a fat guy with a blond hooker-type comes into the restaurant to recruit Tony to run his joint, The Inferno Club, a place where the waitresses all wear devil costumes that are one-size too small.  At first Tony hesitates, but after consulting Gina, he agrees to the new job.  He is sure he can avoid becoming mixed up with the "Devilettes" and they could use the money for getting married. 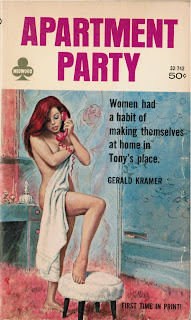 A few weeks later, the beautiful Laurie shows up to apply for a Devilette job at the club and Tony senses he is doomed, that he will have Laurie no matter what the consequences.  In the meantime, Laurie fights with fellow Devilette Jessica for the attention of a schlub who is soon leaving for Hollywood to work on a sword and sandal film.
Mario has so much sex that he flunks out of college.
Tony finally hooks up with Laurie.
Gina can't find Tony.
Mario and Tony's mother has a heart attack and dies.
Mario starts to work at the Inferno Club, against Tony's objections.
Laurie finally outwits Jessica and leaves with the Hollywood schlub, leaving Tony high and dry.  When he tries to reconcile with Gina, he is told she left for Florida and not to bother her.
In the end, Tony and Mario are still working at the Inferno Club, bringing home new Devilettes almost every night.  But in the end, we sense that Tony is not happy with this life.  Does he still miss Gina?  Does he feel responsible for his mother's heart attack?  We may never know.
Email Post
Labels: 1960s New Yorkitude Sleaze