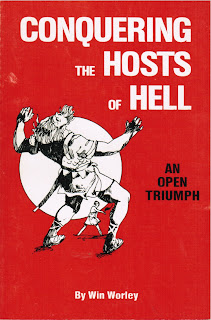 H.B.C. Publications, Inc.
Personal accounts of Satan's defeat as secured by Southern Baptist minister Win Worley, a read that is at once hilarious and horrifying.  Before offering these testimonies, Worley surveys the current challenges facing the demon-caster in the late '70s, including witchcraft, "the curse of Jezebel" (i.e. women), succubi, incubi, subliminal advertising, cults, etc.  While these may seem like the usual suspects on the Southern Baptist front, Worley throws in the wild card of claiming anaesthesia and blood transfusions can cause demonic possession:  "I cannot say with certainty how it is accomplished, but in some susceptible individuals, it is possible for demons to transfer through the bloodstream.  I do not pretend to know how this happens, but there are cases of dramatic and awful personality changes following a blood transfusion which are obviously demonic in nature."  Later Worley warns us that hospitals are full of demons who have vacated dead bodies and are waiting for new hosts--these demons are fully capable of entering the body through a surgical incision.  Again, the year is 1977.

The "testimonies" are similarly depressing inasmuch as many of the people saved by Worley were clearly borderline psychotic.  I suppose one could argue that if Worley's demon-driven vision helped people live happier more productive lives, there's really no harm done in the end.  But reading through the testimonies, there is an overwhelming vibe that most of these conversions were the result of emotional instability, and in some cases, actual schizophrenic episodes.  A survey of pre-conversion difficulties: depression at army boot camp; growing up in a hotel full of prostitutes; sexual abuse; allergies to cats and detergent; inability to concentrate in dentistry school; paranoid-schizophrenic diagnosis; apparitions caused by over-interest in astrology; early hair loss (attributed to a "baldness demon"); "worldly" atmosphere of a college art department; flirtations with Communism and Nazism; overly strict Jewish parents combined with an unhealthy interest in the Moody Blues.

After next Tuesday, many of these people will apparently be in positions of power in the United States Congress.  Cheers!
Email Post
Labels: 666 author demonstrably insane Inexplicable mind control musical evil Psychosis religion Satan