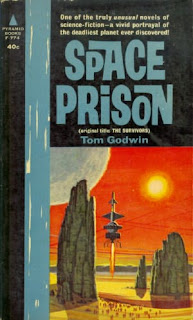 Tom Godwin
Pyramid Books
Let's all go to Space Prison, shall we?  The worst reprobates of the universe, crammed together in the Big House on Taljare-8.  A space mess hall where prisoners bang their space trays and space cups on the table to protest the horrible space gruel.  Hiding a space spoon in the cell to start digging a tunnel to the outside. The space-grudges...the space-shanking...the interspecies homoerotic space tension! Beings of all sizes and shapes bound together by the code of intergalactic crime: murder on an outworld colony...robbing a space transport of its rare metals and spices...check-kiting on Rigel 14.  This is going to be a great read...

But alas, Space Prison is only another rip-off perpetrated by the publishing industry of the sixties.  This book was actually published originally as The Survivors, and there are in fact no recognizable prison conventions to be found anywhere.  Here's what wiki has to say about it:

It was published in 1958 by Gnome Press in an edition of 5,000 copies, of which 1,084 were never bound. The novel was published in paperback by Pyramid Books in 1960 under the title Space Prison. The novel is an expansion of Godwin’s story ‘Too Soon to Die‘ which first appeared in the magazine Venture.”

What do we get instead of space prison?  Earth is locked in a deadly war with the Gerns.  A transport ship attempts to sneak a colony of earth people to another planet in anticipation of the impending Gern victory.  But the Gerns intercept the ship and quickly divide the humans into two camps: the "Acceptables" (bound for enslavement as research scientists on the Gern home world) and the "Rejects" (summarily herded onto a landing vehicle and then ditched with a few supplies on a god-forsaken planet).  After that, the story is one of survival rather than incarceration, as the Gerns have put the Reject-humans on a planet that has huge extremes in weather and two terrifying adversaries:

1.  the prowlers: wolf-panther badasses that rule the planet and are unwilling to accept the intruding species.

2.  stampedes of blood-thirsty unicorns that can stomp and rip a man to shreds.

Space Prison is a somewhat difficult novel to follow in that each central character dies after about 40 pages, handing the narrative baton to the next ruler of the human colony.  I'm guessing the author was at one time a geology major in college, as much of the story involves search parties looking for iron deposits that might be exploited to build a new spaceship for escape (the logic here was unclear.   The colony can barely survive from year to year foraging for herbs and unicorn meat, so it isn't exactly apparent how they will find the time and resources to construct a space ship).

The ultimate goal, after surviving, is to take the battle back to the Gerns.  Part one of a series, apparently.  I doubt I will read part two, unless of course I am tricked once again.
Email Post
Labels: 1960s blood thirsty unicorns sci-fi WiP