I bought Psychotic Anxieties and Containment at a library book sale a few years back. For a buck, it seemed well worth the price. Beyond a certain morbid curiosity as to what might constitute “psychotic anxiety” (which sounds like a state of tension beyond even “panic” that still does not have the mercy to shut down the nervous system opossum-style), it seemed like a good idea to have a guide on hand for “containing” said anxieties should they ever erupt and were I—in that moment-- still lucid enough to read. As so often happens when you judge a book by its psychotic cover, however, this is about something else entirely.

Psychotic Anxieties actually belongs to the most esoteric of literary subgenres: psychoanalysts recounting the story of their analysis under other slightly more famous psychoanalysts. In this case, British psychoanalyst Margaret I. Little narrates her 20 some years of therapy—the final seven years of which were under the direction of Donald Winnicott, an analyst apparently pivotal in the post-war battles between Anna Freud and Melanie Klein over the future of psychoanalysis. 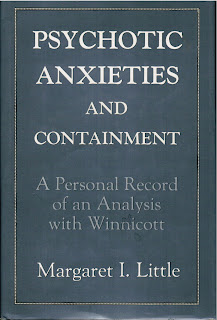 This was all news to me. Like most scholars in the humanities, my commitment to psychoanalysis doesn’t really go beyond memorizing the different phases of Freud’s career, learning some good gossip about the “inner circle,” and having an opinion as to whether Lacan was joking, insane, or the most brilliant man of the 20th century. Through Little’s account of her therapy, however, I have now learned that Winnicott worked closely with psychotic children and gave us the famous term “transitional object” (an object that helps children reduce anxiety during periods of stress—like a blanket or stuffed toy).

Little survives her years as "borderline psychotic" to become a practicing analyst herself. To many, this might seem like consulting a surgeon who was once "borderline butterfingers," but psychoanalysis is apparently the one profession where disassociative experience actually look good on the resume.

For psychoanalytic completists only.