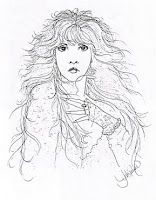 A fan's appreciation of Stevie Nicks' post-Fleetwood career. Mostly pictures and drawings like the one below, prefaced by a rather long account of the author's failed attempts to secure Ms. Nicks' participation in the project. In telling that story, Wincentsen introduces us to another fan who once ran a fanzine called Platform. Nicks requested that this other fan cease publication of the 'zine, but apparently still allowed her to pick up "esoteric books" for her at the Bodhi Tree Bookstore. Later in the book, Tori Amos is nominated as having the potential to carry on the Stevie Nicks tradition, should she want to.
Wynn Publishing apparently specializes in fan-written books about '70s rock acts. You can also get books about Led Zeppelin, Lynryd Skynrd, Heart, and Joe Walsh.
Email Post
Labels: 1990s author demonstrably insane Celebrity Bullshit creepy and/or uncanny cults: real and imagined