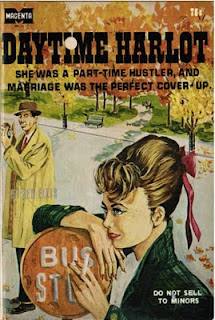 Men were so simple.  So utterly simple.  She had only to shake her tits at them and they would do handsprings. She could make them do anything she wanted.  Who said it was a man's world, anyway?

So sayeth Marion, wife turned hooker in Daytime Harlot (1965), yet another in a seemingly inexhaustible supply of "suburban sin" novels from the 1960s.   For aficionados of this particular subgenre, here's the "plot" in pulpy shorthand:

"Frigid" Marion turns tricks in rented apartment -- her frustrated husband Tom is having affairs -- flashback to Marion's life story (abused girl >> hates father >>  teen prostitute >> man-hater >>  lesbian >> gold-digger >> daytime harlot!) -- back to present, Tom orders a hooker by phone to meet and "entertain" a visiting business client --Tom, his boss, and the client meet hooker at airport -- it's Marion! -- a final fight and confession ("You still don't the know the worst of it, husband," she said, her voice stronger now--full of bitterness.  "What I really am is a queer!  How do you like that, huh? A queer!  I'm a whore just for the hell of it, but a queer because that's the way I am!") -- Tom walks out on her to quit his job and leave town forever -- Having lost all respect, income, and cover, Marion goes up to roof and jumps "into the void."

All in all, a fairly typical excursion into the sleazy underside of sham '60s marriages.   Except Daytime Harlot features a rather strange epilogue.  No sooner has lesbian-wife-harlot Marion hit the pavement, the book tacks on a nice little romantic fantasy involving Tom:

It was sixteen months later when Tom Roberts and Nancy Bannon were married in a church in Chicago.  His mother came from Minneapolis, which was his boyhood home, and her parents were there.
Tom had never seen a woman look more beautiful in a wedding gown.  Or in anything else for that matter. As he looked at her, he called himself the luckiest man alive for having drifted finally to Chicago--after seven booze-drenched months in California, Arizona, and other places best left forgotten--and for stopping in one day at the struggling agency whose ad he had seen in The Tribune.
It had been a small ad--for a small job.
But Tom had landed it.
And that had set his feet back on the path again.

What makes this epilogue peculiar is that "Tom," for the most part, is invisible in Daytime Harlot.  We meet him in the book's opening pages, but only to establish that Marion has "a problem."  The majority of the book recounts in salacious fashion the various sexual encounters that "turn" Marion into a man-hating lesbian.  Tom only returns in the final few pages for the ill-fated rendez-vous at the airport.  Marion's leap from the roof seems a definitive ending--especially since she is the focal point of the entire novel.

One has to suspect that the epilogue was added for the psychological benefit of the straight male readership targeted by such fiction.  Sure, it's great that Marion is appropriately punished for whoring and lesbianing and all that--still, there's something unsettling about having the heteronormative rug pulled out from under your feet so violently.  Imagine the triple humiliation that unfolds for Tom (and thus the reader) in the novel's climax:  My frigid bitchy wife is actually a prostitute...and a lesbian...and this is all happening in front of my boss. Man, am I ever screwed.  No wonder author Ben Ellis felt the need to tack on a "happier" ending for his audience of married men, many of whom--while titillated by their imagined glimpse into the world of trick-turning and lesbian seduction--were no doubt a bit spooked by such close contact with these more "perverse" worlds.

The novel ends, of course, with Tom and new virgin-wife Nancy in bed:

She embraced him with her arms and her legs and whispered breathlessly, "Oh...you're wonderful, darling.  Oh...Tom...my lover...my darling..."
She moved with him, her passion a perfect match for his own, as she gave herself and as he took her in the sweet pure beauty of love.
Tom felt that in a sense it was for him, also, the first time.  Suddenly all that had gone before seemed to be nothing but a dark and soon to be forgotten dream.
--THE END--

For this brief moment, a sleazy "do not sell to minors" paperback and the Harlequin romance share an identical ending-- slightly damaged but recovering man marries virgin girl in utopian fusion of love, sex, and gainful employment.  It's almost like the book takes the scared little boy reading the book and consoles him with a big hug--"there, there...the scary lesbians, prostitutes, and frigid wives who would humiliate you are all gone now, a dark and soon to be forgotten dream."  A porno Jane Eyre from Rochester's view, with the "mad wife" renting a sleazy attic near the airport to screw strange men and an occassional Grace Poole.
Email Post
Labels: 1960s sex trade Sleaze