Cyrus and the Mosquitoes 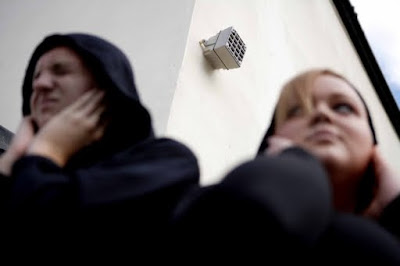 So it has come to this.
A British court ruled earlier this week that it could find no compelling reason to outlaw “the mosquito,” a sonic device currently used by many merchants and city governments as a type of “teen repellant.”  Turning the superior frequency range of the teenage ear against itself, “the mosquito” emits an annoying 16.5khz tone at an annoying 108 decibels—a sonic nuisance said to irritate teens while remaining completely imperceptible to anyone over the age of 25.  Authorities deploy the mosquito in an attempt to prevent teenagers from congregating, loitering, and just generally existing in places where their presence is not welcome--near storefronts, at the food court, in alleyways, etc.  Civil rights groups in the U.K. and Europe continue to combat the mosquito as inhumane and unjust, but for now it remains perfectly legal to herd teenagers by threatening them with early tinnitus.  And as this practice becomes more widespread in the U.S., as it inevitably will, I doubt anyone here will have any qualms about this whatsoever.

When western capitalism invented the teenager as a consumer target in the post-war era-- largely to help supercharge the peacetime economy--perhaps it realized this day would one day come, the adult order turning on the teenage population to the point that implementing social control through sonic torture would seem wholly appropriate.  A hundred years ago, a shop-keep looking to clear some rambunctious kids off the pickle barrels would have simply come out to shake his fist at them, perhaps bringing a broom or a bucket of water along for additional persuasion.  The mosquito, on the other hand, treats all teenagers as an undifferentiated mass of deviant potentiality, seeking not to discipline the few “bad apples” who might deserve it, but rather to deal with the very category of the teen—biologically and socially—as a structural menace.  For many this strategy seems wholly reasonable.  Shake a broom at some teenagers today and you’re liable to get shot.  And if Harry Brown (2010) has any basis in reality, no one would blame the British government for using mobile mosquito trucks to herd all of their youth into a Logan’s Run compound somewhere in the Highlands where "guests" can only leave once they prove nothing registers over the 15khz band (a similar compound would be needed in the United States.  I nominate North Dakota).

The “teenager” is still a lynchpin of the consumer economy in so many ways; or put more accurately, people between the ages of 13 and 19 still have a lot of influence in the marketplace.  But the willingness of authorities to simply incapacitate and scramble an entire population through acoustic assault suggests “the teenager” as a conceptual category is beginning to fade, soon to become an historical relic. We still need to sell things to them, of course, but actual "teenagers" have become too crafty and noisome to deal with directly anymore.  The recent cultivation of a “tweener” market (pre-adolescents on the threshold of puberty and chronological teendom) suggests the culture industries have had to regroup when it comes to marketing prefabricated crap to a naive and hormonally confused demographic.   In 1969, the possibility of finding a 16-year old Monkees fan was slim--but not necessarily inconceivable.  Today one has to imagine (or perhaps hope) the same could not be said of Justin Beaver,* an act so blandly inoffensive that he would seem in danger of boring even a fetus.  Once 13-year- olds started listening to Megadeath and N.W.A. many, many years ago, the Disney corporation practically had to invent the tweener in order to better stabilize market predictability.
Dissolving as a cultural formation and as a biological entity (science tells us that the age of puberty, through some unknowable and vaguely alarming form of nutritional/cultural hocus-pocus, keeps arriving earlier and earlier)—the teenager is also breaking apart along class lines.   Consider whom "the mosquito" actually targets.  These devices are not deployed outside of Abercrombie & Fitch to prevent Ashley and Chad from procuring the latest cuts in denim and thong-wear; rather, they are stationed in town squares, McDonald’s parking lots, library plazas, garages, municipal parks, and other supposedly “public” thoroughfares where a more disadvantaged class of teens--those lacking Ashley and Chad’s access to education, opportunity, or even a home--tend to meet, hang out, and in some cases “work.”  In theory the mosquito is an equal opportunity annoyance, but in practice it actually targets an underclass between the ages of 13 to 25 who are not really “teenagers” so much as lumpen-adults, those left to fend for themselves as drop-outs, runaways, unskilled laborers, gang bangers, and/or entry-level workers in the drug and sex trades.  Despite the unnervingly Orwellian implications of the mosquito, coverage of the device tends to take the perspective of humorously aggrieved elders deriving a playfully sadistic pleasure in hassling spoiled, idle teenagers—but there are no such “wiseacres” in the mosquito’s sonic net.  By targeting the  increasingly antiquated notion of “the teenager” in the abstract, the mosquito finds cover for its real mission—chasing away those scary guys in hoodies you imagine are looking to tag your dumpster. 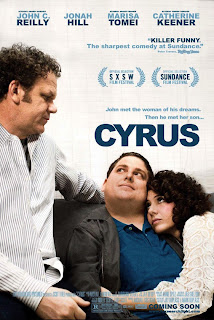 Contrast this to the plight of middle and upper-middle class “teens” so brilliantly captured in the new “mumblecore” feature Cyrus (2010).  Briefly recapped (spoiler alert), John C. Reilly plays a middle-aged guy who has been languishing for seven years in the wake of a failed relationship.  Things begin to look up after he meets Molly (Marisa Tomei), the first promising romantic partner he’s encountered since his divorce.  Complications and hilarity ensue, however, when John discovers that Molly’s 21-year-old son, Cyrus (Jonah Hill), still lives at home.  A creepy war follows between man and man-boy over Molly’s affections, Cyrus determined that his place in the household will not be usurped.


Many critics have focused on the film’s rather explicit “incest” vibe, the fact that Molly and Cyrus seem a bit “too close” in their progressively "modern" Mother/Son relationship.  But this is all a smokescreen, I think, for the more troubling social anxiety explored by the film; namely, the national shame of the “boomerang child.”  Ironically, the intimations of incest here actually help displace the more widespread sociological horror of young adults who, either structurally barred from entering the adult economy or emotionally unprepared to enter adult life, end up moving back home in a type of protracted post-teen adolescence.  “Cyrus” is a boomerang never even thrown—we learn early in the story that he has been “home-schooled” and received his G.E.D. at 16.  What would be his “college years” remain rather hazy, leading us to suspect that Cyrus has spent most of his young adulthood doing pretty much what he did when he was 13.
The new economy thus destroys the classical teenager on two fronts.  No longer afforded the educational or economic opportunities to live in seven years of teen limbo, underprivileged kids simply graduate into a dysfunctional adulthood (as they always have).  Middle-class kids, meanwhile, unable just yet to reap the occupational inheritance of a middle-class upbringing, find this limbo of quasi-adolescent-adulthood extended into their late 20s or even early 30s--a place to kill time until the economy has room for them. 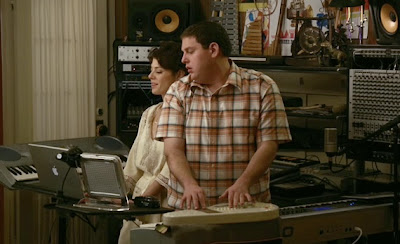 A moment early in Cyrus encapsulates our collective self-loathing at this new reality.  Having just met his mother’s boyfriend, Cyrus invites him to sit on the living room couch and listen to his latest musical composition.  Draped in layers of fat that help signify the flabby, untested privilege of American adolescence, Cyrus stands amid a bank of expensive synthesizers, digital recorders, and computers solemnly performing his overblown magnum opus, a work wholly uninformed by any accumulation of actual life experience or contact with the proverbial “real world.”  It is one of the film’s more hilarious moments, but also a spooky image of what we imagine to be the racialized and class-divided fate of the nation’s teenage future—poor kids of color out on the streets with no time to be teenagers, and white kids of privilege kept in a type of cryonic suspension where they are encouraged to realize their unique creative vision and personal destiny by playing with expensive toys.


Teenage hijinx ceased being adorable almost the moment they were invented.  It may have started out with malt shops and sock-hops, but before anyone knew it, they were all sitting around in the basement stoned listening to Inna-Gadda-Da-Vidda and refusing to mow the lawn. So now that they have become an annoyance en masse for the entire social order, the future seems clear: blast the "bad" ones with ultrasonic frequencies to send them scurrying like cockroaches into the community's most abject nooks and crannies, and cocoon the "good" ones with consumer electronics until they're ready to be fully functional butterflies on the outside.  It's unfortunate, but that's just the way it is.


But on the bright side, perhaps the mosquito is just the first step in a whole series of new technologies that will allow for creative social warfare.  How long, for example, until some enterprising entrepreneur comes up with a device emitting a frequency that specifically vibrates the prostate and bowels of men over 50, thereby clearing them from any room so that teens can reclaim a given territory?  Perhaps frequencies, fragrances, color schemes, and other somatic strategies can be developed to divide people by race, sex, and gender as well as by class and age, thereby offering merchants and assorted assholes tools for an almost scientific form of sociological orchestration.  Once upon a time these divisions were cultivated through marketing—but with the consumer economy in such a state of crisis, the time has obviously come for more direct tactics of social control.


*as noted in an earlier post, I am fully aware that the real name is Justin Bieber. I prefer "Beaver," however, as it is funnier and more befitting of his luxurious coat.
Email Post
Labels: Filmed Product Generation XYZ Intentional Comedy Normalization Post-Analogue Reality