One of the most pernicious legacies of auteurism is the now deeply engrained habit of siding with directors in disputes over resources, creative control, and final cut.  Film theorists need to engage in a systematic program of research to discover—not how or why we identify with images on the screen—but why we forge strange parasocial alliances with people we’ve never met over issues that don’t really concern us.   I blame Godard.  More specifically, I blame how unbelievably cool Godard looked in Ray-Bans.  How many young aesthetes were led astray in the ‘60s and ‘70s by these images of Godard inspecting footage and cavorting with Anna Karina in those Je vois tout mais vous ne voyez rien shades?  Checking the day’s footage while wearing sunglasses probably isn’t even a very good idea—but who cares as long as they help you sell even a receding hairline on the streets of Paris.

I gained further insight into the folly of directorial fetishism this week after finally catching up with Michael Mann’s Public Enemies (2009) on cable.  I thought the film itself was okay, pretty good actually.  I didn’t feel like I had witnessed the great American parable of violence and justice it seemed to be going for, but on the other hand it kept moving and Depp is always interesting to watch as an actor.   Plus, I got to see familiar parts of my neighborhood in Chicago decimated by tommy-gun fire.

In fact, I first learned this film was going into production two summers ago when suddenly I was stuck in a horrendous traffic jam in front of the fabled Biograph Theater near my house.  At first I thought it was just construction, but then I saw the tell-tale signs of a movie crew at work dressing an exterior set.  After learning what all the hub-bub was about, I later came back on foot and walked down the street to see how things were progressing.

G-Men gunned down John Dillinger near the Biograph Theater in July of 1934, thereby bringing an end to his life and most likely to any movie depicting that life.  So the crew was clearly dressing the street for the crucial, climatic scene of the film.  And they were sparing no dollar in doing so. 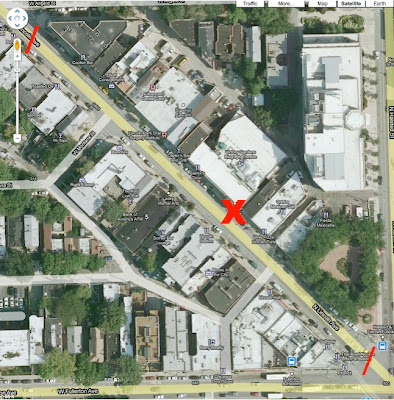 In the satellite map (above ) of the area,  the red X designates the spot where Dillinger snuffed it.  In between the two red slashes (Lincoln @ Fullerton up to about Lincoln @ Altgeld for those who know the city), a crew had installed fake cobblestones and trolley rails to bring the street back to its look in 1934.  Additionally, producers had secured the consent of every merchant on BOTH sides of the street (again, all the way between the two slash marks) to not only remove all modern signage, but also to install false fronts in each display window dressed with period goods and services.  I took a few terrible pictures with my phone capturing the street's transformation: 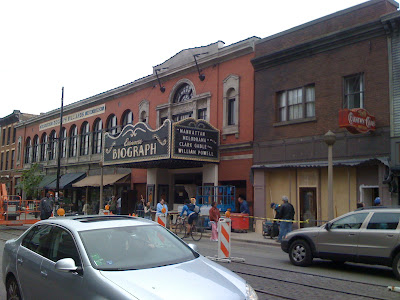 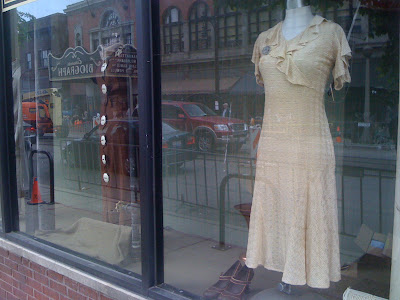 First we see the Biograph itself dressed with its 1934 marquee for Manhattan Melodrama.  To the left a vintage neon sign has been installed to disguise a modern taco franchise.

A book and card shop across the street installed with a fake display window and turned into a 30's dress shop. 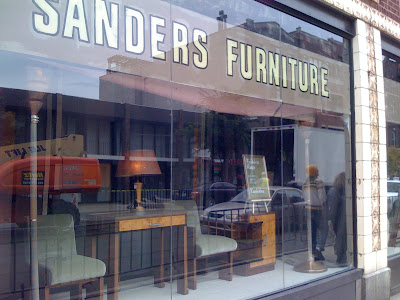 The local Walgreens disguised as a furniture store, complete with vintage pieces on display. 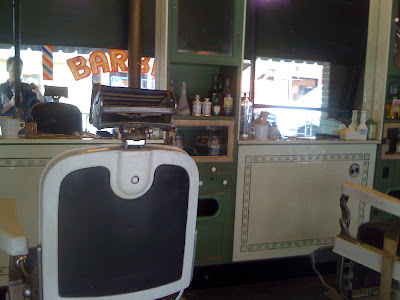 A recently abandoned theater space transformed into an old-timey barbershop.


I'm no math-whiz, but ask yourself for a second how much money it would cost to lay a quarter-mile of cobblestones and trolley track and then completely redesign the store windows of some twenty odd merchants on each side of the street.  But worth it, right?  Especially if it helps capture the grit and realism of Dillinger's final moments on earth.

Like all people who write on film, I'm not above blocking a scene here and there while I'm walking along, especially when a local thoroughfare has been so extensively dressed for the camera.  So I tried imagining what Mann planned to do with this space.  Obviously, I thought, there was going to be some sort of ambitious tracking shot down the street, taking in all the rich details of the set design.  At some point, the camera must follow someone across the street, carrying the action to both sides of Lincoln.  Whatever it was going to be, it sure did promise to be spectacular.

But here's the deal.  Virtually none of this ended up on the screen.  There is a fleeting crane shot (maybe 2 or so seconds) showing the cobblestones and tracks from on high, but when the time actually came to shoot the core of the scene, Mann opens on a close-up of the agent charged with signaling his peers that Dillinger is leaving the theater.  Once Depp-Dillinger emerges, Mann stays in front of him fairly tight on the sidewalk until the gunfire begins.  There aren't even any cutaways to other parts of the street to show crowd reaction, or other cops running to the scene, or...nothing.  From what my fairly educated eye could discern, this two-week project of massive street transformation translated into: a). an establishing shot of the Biograph's marquee; b). the fleeting crane shot of the street from above.  Everything else appears to have been a complete waste of time and money.

Were there more involved shots involving the street scene that got cut from the film?  Or did Mann not know what he wanted to do until he got there to eyeball the set?  Perhaps he thought in the end the dressed set simply didn't pass muster?  Who knows, but in the future I will try to be more sympathetic to the complaints of producers when they bemoan projects needlessly going over budget.

And I was so looking forward to seeing bullet-holes riddle the corner Mickey D's.
Email Post
Labels: Commerce Filmed Product Valuable Advice to the Culture Industries