"Zaat" and the Poetics of Despondent Indifference 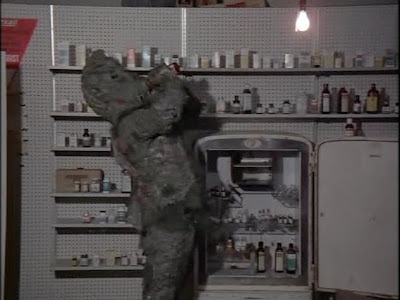 Essential to the romance of low-budget cinema is the belief that everyone is trying as hard as they can, from the director to the grips to the extras to the guy baking weenie-rolls in the honey wagon.   Sadly, however, evidence often suggests that the arduous demands of film production can prove just too difficult, breaking the spirit of cast and crew to the point that everyone simply gives up and throws in the towel.   Even if the movie is “finished,” so to speak, signs abound as to the obvious fatigue and despair that gradually overtook the project.

We have such a film in Zaat (1975).  Written and directed by Don Barton and shot at various “resort” locations across Florida, Zaat might best be described as an aquatic revenge monster-movie (briefly interrupted by a time-killing hippie sing-a-long).  First, a little background:  at some point in the mid-1960s, a vat of “walking catfish” got loose somewhere in Florida’s Broward County.  Native to Southeast Asia, “walking catfish” are about a foot-long and--as the name implies--can temporarily emerge from the water to waddle across dry land (usually in search of more water).  They are, quite frankly, an abomination, and it is difficult to judge if their existence should be more troubling for Creationists or Evolutionists.  If God made them, then God is clearly just trying to fuck with us.  And if they evolved from some random mutation, then truly the universe is a vacuum devoid of any apparent design or meaning. 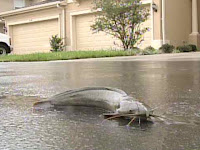 While bad news for Florida, this walking catfish invasion was no doubt good news for followers of monstrous cinema.   The 1950s had for the most part already exhausted the menagerie of objectionable creatures that might run amok on celluloid: spiders, ants, wasps, crabs, lizards, preying mantises, and even a poorly exposed Gila Monster had all already made their bids for global domination.  What a Godsend, then, to suddenly stumble upon a creepy fish able to flop out of the water and wriggle across dry land.  The beast's uncanny locomotion presents a direct challenge to human reason and security: Why does this exist?  What does it want?  Why doesn’t it just stay in the water?  Could it make it from the creek to my house, kill me in my sleep, and then return to the water before being noticed?

I’m sure this was in everyone’s mind when Zaat began principle photography—we’re really going to be at the forefront of the walking catfish hysteria soon to sweep the nation.   Of course, transforming a foot-long fish into a bonafide movie monster is no small challenge.  How to do it:  Matte shots?  Stop-motion?  Man in fish suit?  And how to motivate the creature's "origins:"  Toxic spill?  Alien invasion?  Superfood debacle?  Zaat opts for the time-honored conceit of the mad scientist obsessively devoted to a pointless and seemingly circular task—in this case, transforming himself into a walking catfish so that he might exact revenge on all the scientists who never believed in his formula for turning men into walking catfish (“Zaat,” by the way, is the name of this formula: Z sub A, A sub T).

Like so many terrible horror movies, Zaat goes a good 10 minutes before we encounter any sync-sound.  In the meantime, we are treated to a rambling interior monologue as the scientist walks around his laboratory scientifically observing various squids, crawdads, and octopi, all the while extolling the virtues of sea creatures over the fundamental loathsomeness of humankind.  The scientist’s goals are simple: 1). Transform self into a walking catfish; 2) kidnap a sexy girl and transform her into a walking catfish; 3). Deposit his “Zaat” serum in the lake to transform regular catfish into an army of giant warrior-fish; 4) conquer the world.

After hoisting himself with a block and tackle into a portable swimming pool laced with his serum, the transformation from man to fishman proceeds quickly.  And here is where we begin to suspect that the filmmakers simply lost heart during the production, realizing at this precise moment—perhaps the first day of the shoot—that they simply were not up to the technical demands intrinsic to their ambitious premise.  When “Zaat” emerges from the water, he doesn’t look so much like a “walking catfish” as he does the Gorn from Star Trek, "aquafied" by having a little fake seaweed and algae draped around his neck and joints.   Worse yet, the actor within this “catfish suit” does little to “sell” his performance as a walking land-fish; rather, he strides about the set as if he were casually making his way to the porta-john between takes.   Fifteen minutes into the film and all of us, on both sides of the screen, realize that we are doomed.

The results are so dispiriting, in fact, that the filmmakers obviously felt the need to address our disappointment directly in the script.  Zaat looks into a mirror to see himself for the first time.  In what I believe Christian Metz would label a parallel achronological syntagma, the filmmakers quickly intercut between “Zaat” looking in the mirror and stock-footage of an actual walking catfish, illustrating both the desired model of reference as well as the overwhelming failure of its realization. 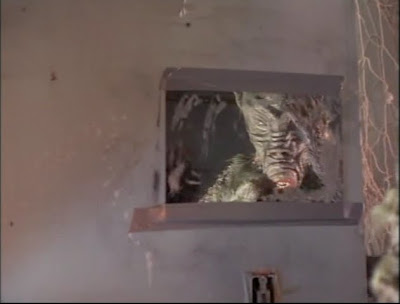 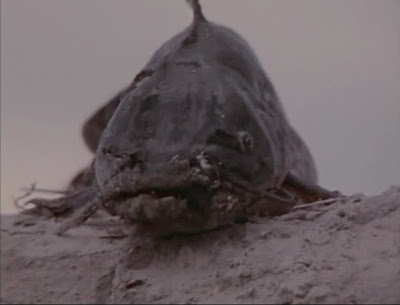 Rather than work harder to create a more convincing catfishman illusion, however, the despondent producers simply insert a line of dialogue intended to erase our disbelief through the most feeble powers of suggestion.  “Nothing at all like the catfish!” says Zaat, who like the viewer is apparently disappointed in his make-over.  “But it’s beautiful,” he adds, implying that if he’s not bothered by it than neither should we.  Moving on.

Later, Zaat leaves his lab to begin his rampage of bottom-feeding revenge.  Like any walking fish would, Zaat opts for the stairs, and so the camera follows him across the lab and holds steady as he exits frame via the staircase.  But the camera lingers even after the creature is gone, drawing attention to a lonely paint can perched atop what appears to be some kind of fuse box or utility cabinet. 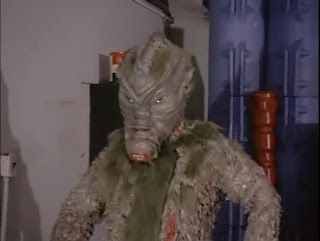 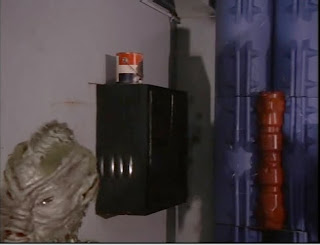 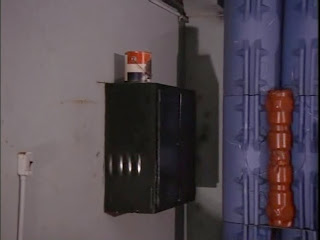 As the paint can demands our attention, both through the framing and the extended duration of the shot, we can’t help but think it will prove pivotal later in the movie.  But no, it does not.  Ultimately it stands as yet another mute witness to the unrelenting apathy of the filmmakers, too defeated apparently to even bother cleaning up the set before rolling film. Indeed, it would be hard to imagine a shot more aggressively unaestheticized than the one above--stray paint can, dirty wall smudge, cylindrical flotation device, and rusted light switch presented as a study in filthy nonchalance.   Was this can of paint used in prepping the set?  The wall smudge says no.  Or was it a can that occupied the space well before the film crew arrived and remained long after they left?  We will never know.

Most pathetic of all, finally, is a prop that might best be described as Zaat’s “chore wheel.” 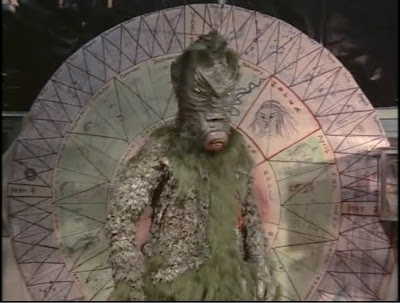 Like any fiend bent on world domination, Zaat hopes to remain on schedule.  To ensure the timely implementation of his plan, Zaat has taken care to illustrate his month-by-month program on a large zodiac disc of some kind.  Below we see his agenda items for March: 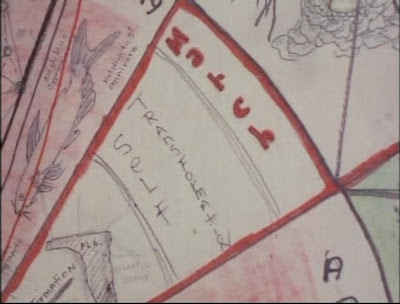 In another symptom of group depression, note how the "art director" has rendered “Transform Self” into the less legible and perhaps meaningless, “Transformation Self.”  And yet apparently no one on set had either the energy or the pride to revisit this prop (shot, it should be noted, in an extreme close-up that makes the careless incompetence all the more obvious).  One might think that even the least ambitious filmmaker would have opted here for rub-on transfer type, if only for the “month” designations that circle the wheel as a standing template for Zaat's personal data. But no, the art director has simply written the world “March” with no real effort at properly measuring or spacing the letters, accented by an “r” so poorly executed as to seemingly issue from a foreign alphabet.  Astute viewers may also notice a similarly childish rendering of Florida at the bottom left of the frame haunted by the half-erased words “Atlantic Ocean”--notations that apparently once helped this scientific genius remember where he was and by which body of water.

Incredibly, once his transformation from man to fish is complete, Zaat returns to the chore wheel to cross out this accomplishment with a red marker.  Transform into fish.  Check. 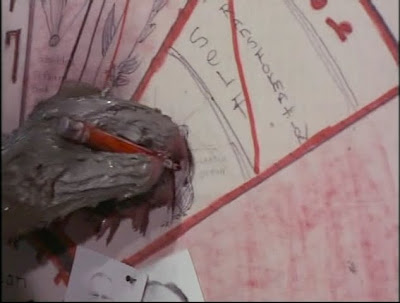 It appears Zaat’s chore wheel is not only a ridiculous and wholly unnecessary addition to the laboratory, but also the default “script supervisor” for the entire production.  Indeed, as Zaat repeatedly returns to the wheel over the course of the film, it is difficult to know if he is a diabolical villain monitoring his progress or a confused cast member trying to remember what has and has not yet been shot.   For all the viewer knows, the wheel may even have been a pre-production chart that somehow ended up on camera.  When Zaat prepares to kill his disbelieving rivals, for example, we first see their “headshots” affixed to the wheel—remnants perhaps of their initial audition. 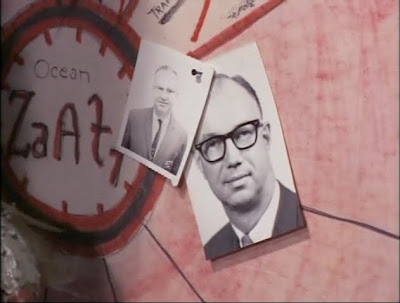 As further evidence of Zaat’s ambiguous conflation of pre-production materials and principle photography, we later see the creature pausing to “storyboard” his own narration even as the film approaches its final showdown.  When the first Mrs. Zaat reacts poorly to the serum, Zaat realizes he needs to find a new woman to turn into a catfish companion.  Zaat takes pen to paper to quickly sketch his new object of desire—the beautiful marine biologist sent by the government to aid in Zaat’s capture. 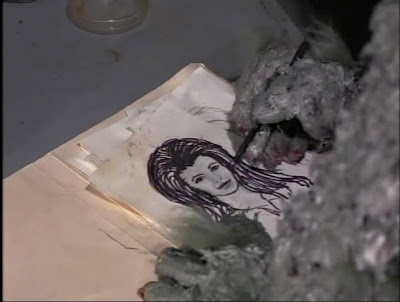 The sketch completed, Zaat proceeds to hammer the portrait to his wheel.  Is this a device to help the viewer better understand what will be at stake in the film’s climatic final act?  Or is it merely the director’s primitive way of reminding the cast and crew what remains to be done before their collective nightmare of collaborative shame can come to an end?  Perhaps it is a little bit of both.  Here.  This is what we'll do.  This is what we'll shoot next and then we'll be done.  Then we can all go home and take long showers and never speak of this again. 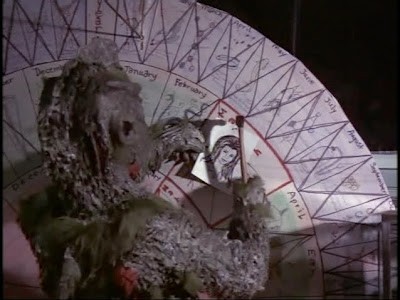 Many low-budget “bad” movies make you feel an odd sympathy for all involved.  But again, that emotion can only be sustained if one maintains the fantasy of extraordinary effort on the part of the filmmakers.  Zaat, on the other hand, is so lackadaisical in its failure, so casual in its atrocities, you can only feel personally insulted.  How could so many care so little about so much?  How could a film be more confrontational in its mournful indifference?  How hard would it have been to at least pretend to try to care?
Email Post
Labels: Bio-Horror Just Depressing Paracinephilia Semi-Formalist Analysis