Brainwashing in the High Schools (1958) 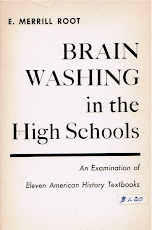 Many were shocked last month when the textbook adoption committee in Texas voted to remove Thomas Jefferson from High School history readers in order to place greater emphasis on George Washington (and others). As it so happens, however, the political right appears to have been seething about Jefferson for almost a half-century. Root's book examines 11 American History textbooks circulating in the late 1950s, finding them all to be enemies of private property, decentralized government, and other tenants of basic conservatism. Weirdest of all is a content analysis, complete with comparison chart, demonstrating the total line count in each book devoted to Washington and Jefferson (the final tally: Washington (109)/Jefferson (155)). Quoting a British historian, Root notes that "the truth in history resides in proper proportioning." Washington, as the more "conservative" founding father, is thus getting the shaft from Jefferson the "liberal" since TJ receives 40% more coverage in these books. This is particularly insulting, Root argues, inasmuch as Washington "abandoned more and risked more" than Jefferson in participating in the Revolution. Plus, Root observes, Washington was just generally a more interesting, colorful, and dynamic individual. The only possible explanation for this disparity: liberal brainwashing.

I have to say I find this entire flap over Washington v. Jefferson rather confusing. As I recall from the olden days of High School history, everyone was taught that both GW and TJ were terrific guys who each did terrific things. I had no idea that an entire community existed out there convinced that Washington doesn't get his due (after all, he's still called--despite a billion arguments to the contrary--"the father of the country," plus he's on the goddamn one dollar bill, clearly the best bill to be on if your main worry is national exposure. What more could you want?).