The Twisted Drives of Victoria McCall (1967)

Tony Trelos
Victoria McCall wasn’t like other girls.  She was fat. She also had a storm of passion waiting to be unleashed.  It didn’t happen until she dieted.  Then nothing could prevent her unnatural fling…
Best just to go straight to the plot here: Vicky lives with her mom who is frequently abused by the strange men she brings to the house.  To escape this harsh world, Vicky eats a lot of peanut butter and jelly sandwiches and has become rather heavy.  When not eating, she fantasizes about becoming a beautiful starlet—the kind of woman to whom she is increasingly attracted. After catching mom in bed with a particularly disgusting guy, she runs away from home. 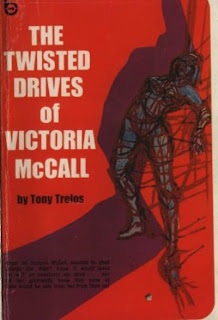 Happily she meets a dyke named Toni on the subway and accepts an invitation to live on her houseboat.  Vicky is in love, but dares not say anything.  When she finds Toni in bed with another woman, she has to run away again.

A year later, Vicky is back.  Dieting and exercise have transformed her into a bombshell, and she uses her new allure to get a high-paying gig as a topless dancer in a swinging New Jersey cabaret.  Here she becomes the “property” of Ronnie, the club’s “butch in disguise” owner.  Things are going pretty good until Vicky decides to see what sex with a man might be like, perversely picking one of the same men who used to beat up her mother.  Ronnie finds out, they get in a fight, and Vicky quickly leaves in the escort of a rich older lesbian from Manhattan.

But Vicky soon gets bored with her new lover and all her snooty, artsy, intellectual friends.  Then one night at a particularly boring party, Vicky thinks one of the men is hitting on her and so she decides to take him into a back room to seduce him.  But—in a scene ripped right out of Now, Voyager—it turns out this man is actually a psychiatrist who has been invited to the party to evaluate Vicky’s growing malaise. Yep, Vicky sure is screwed up, opines Dr. "Get Your Hand Off My Junk." Humiliated and angry, Vicky has no choice but to run away once again.

Cut to a seedy bar somewhere in the Village.  The bartender, whom we haven’t met before, has just sold the joint and can’t wait to get away from all the “degenerates” that hang out there every night.  Someone comes in looking for “Vicky,” whom the bartender only knows as that sweet but sad fat girl who has been a regular for the past couple of years, turning tricks with anyone at anytime for a ten-spot. Nope, he hasn’t seen her.  Then a policeman comes in.  They just pulled a woman out of the river—a suicide.  “Fat girl.  Really big.  Her name’s Vicky McCall.”  THE END.

Oddly, this book is available as a $2 buck download, which means someone had to scan The Twisted Drives of Victoria McCall page by page. Why someone would invest the time and money to do so remains a mystery.

So there you have it.  I’ve read them so you don’t have to (except for Pardon My Body, which was too horrible to finish).  You’re welcome.
Email Post
Labels: 1960s queerish Sleaze