Nutritionally, the McRib and a 6-Rib serving of the BK product are roughly equivalent.  Let us then consider them side-by-side to see which is ultimately the more revolting.

McRib
Year of Origin: 1981 (intermittent since mid-1980s)
Mascot: Demented Scottish Clown who, like the Highlander, appears to possess eternal life.
Meat: Pork
Modality: Pork pieces compressed by a mold to resemble "de-boned" ribs.  Placed on bun with pickles, onions, and copious amounts of smoky high-fructose sauce.
Historical Fantasy: Apparently meant to evoke a "pulled pork sandwich," once ubiquitous to the diet of working men in the early and mid-20th century.
Primary Appeal: Sugary BBQ sauce coats slab of fat and salt to stimulate primeval memories of calorie storage once linked to the triumphant slaying of a great beast upon the plains.

Revulsion Quotient: 9
Attempt to simulate former presence of extracted "ribs" in compressed slab only draws greater attention to the unholy compression of indeterminate pork scraps.  Especially terrifying if viewed without the sauce. 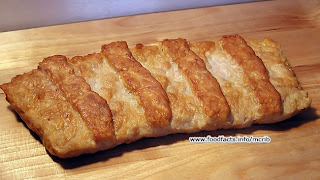 McRib without the sauce...too naked, too real, too horrifying to contemplate.

Revulsion Quotient: 7
Leaving the bone in the product signifies a more natural harvesting of the pork, but the barren presentation of the pig's segmented ribcage in a greasy cardboard box evokes harrowing images of the abattoir, one accelerating production now that BK is in the rib business.

Final Thought:  McRib's horror resides in the gap between obvious mass processing and a feeble attempt to reintroduce some remnant of porcine morphology in the mold template, a gesture that ultimately cultivates suspicion, anxiety, and revulsion in those consumers unable to maintain the illusion of integrated taste and form.  BK "Fire-Grilled" Ribs, on the other hand, produce a more paradoxical horror.  In this case, the presentation of a more "natural" food item only draws attention to the sheer scale of slaughter necessary to furnish each franchisee with dependable product.  Ribs, typically served in small quantities at cookouts and specialty restaurants, become in a "fast-food" incarnation uncomfortably linked to the horrifying spectacles associated with industrial farming.  BK only exacerbates this horror by presenting the ribs, not whole, but in dissected segments that bespeak a further inscription of mechanical violence.