The following comes to us from Telegraph.co.uk.  Once the robots learn how to insult us and undermine our confidence through sarcasm and irony, we truly are doomed as a race.


Scientists devise algorithm to detect sarcasm
(Jerusalem) A computer algorithm capable of identifying sarcasm in written text has been developed by Israeli researchers. 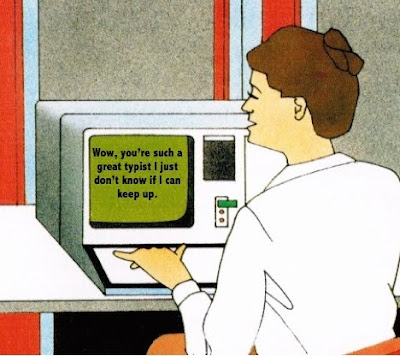 The novel formula could pave the way for more sophisticated communication between humans and computers – the Holy Grail of artificial intelligence.
Devised by computer scientists at The Hebrew University in Jerusalem, the algorithm has been programmed to recognise sarcasm in lengthy texts by analysing patterns of phrases and punctuation often used to indicate irony.
In tests on 66,000 product reviews posted on the Amazon shopping website, the algorithm had an impressive 77 per cent success rate in picking out sarcastic comments – arguably higher than some humans.  The researchers "trained" the algorithm to recognise sarcasm by teaching it nearly 5,500 sentences from Amazon reviews that human volunteers had marked as either sarcastic or non-sarcastic. The sarcastic phrases from the pool of Amazon reviews used for the research included "Great for insomniacs", "Are these iPods designed to die after two years?" and "Defective by design". From its learned list of sarcastic phrases, the algorithm was taught to recognise patterns of words commonly used by writers to show that they do not mean to be taken literally.
The academics write in their study: "We found strong features that recognize sarcastic utterances, however, a combination of more subtle features served best in recognizing various facets of sarcasm." The algorithm's detective skills were then tested on tens of thousands of other Amazon reviews which had also been tagged for sarcasm, or otherwise, by human readers. It produced accurate answers in 77 per cent of cases.
In addition to producing an algorithm with a remarkable success rate, the researchers also drew some intriguing conclusions about why people use sarcasm online. They noticed that the Amazon products that attracted the most sarcastic comments tended to be those with mainstream popularity – such as Dan Brown's novel The Da Vinci Code, and the Amazon's Kindle e-reader. The academics write: "We speculate that one of the strong motivations for the use of sarcasm in online communities is the attempt to 'save' or 'enlighten' the crowds and compensate for undeserved hype."
The authors of the study, Oren Tsur, Dmitry Davidov and Ari Rappoport, say that sarcasm recognition could one day be used by review aggregator websites such as Amazon to decide how reviews and comments should be ranked.
But they offer no clue as to whether the algorithm can detect the irony of their paper's title: "A Great Catchy Name: Semi-Supervised Recognition of Sarcastic Sentences in Online Product Reviews."
Email Post
Labels: Computin' Intentional Comedy Post-Analogue Reality