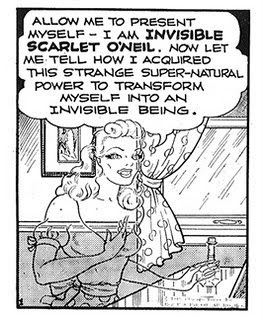 Invisible Scarlet O'Neil (1943)
Russell Stam (?)
Whitman Books
Ever wonder what it would be like to be invisible?  Me neither.  But apparently some people have found this premise intriguing enough to motivate a century or so of popular stories about what it’s like to slink around undetected and perplex saps in the still visible world.  Permanent invisibility drove Claude Raines batty in the 1933 adaptation of The Invisible Man (from the H.G. Wells’ novel of 1897), and Paul Verhoeven pushed this premise to its perhaps inevitable sex-crime conclusion in The Hollow Man (2000) by turning Kevin Bacon into a stealth rapist.

Less known is Scarlet O’Neil, who "appeared" intermittently in a comic strip by Robert Stamm in the 1940s and 50s.  The claim has been made that Scarlet was the first female comic superhero, but as I am not a comic nerd, I have no way of verifying that.  The wiki-Gods do state that Scarlet began in June of 1940, about a year and a half before the debut of Wonder Woman.

Scarlet gained the power of invisibility by accidentally sticking her finger into her father’s weird ray machine, and eventually learned to turn herself "on" and "off" by pressing a nerve in her left wrist.  It’s a strange explanation, not that there is any plausible motivation for invisibility. Like so much anatomical mumbo-jumbo, there’s a touch of Luigi Galvani in this logic, making Scarlett’s invisibility a putatively “natural” power of her nervous system.  America would have to wait until the 1960s for the more occult invisibility of Jeannie and Samantha.

Whitman Publishing (of Racine Wisconsin) brought out a novelization of Stamm’s strip in 1943, Invisible Scarlet O’Neil.  In my continuing effort to read and summarize odd books that would otherwise go unread and unsummarized, here are some basics of Scarlet’s world—at least in her prose incarnation. 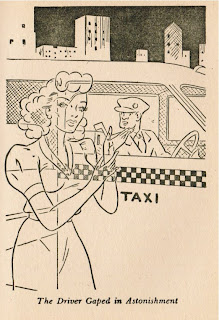 Scarlett appears to be an attractive and unattached young lady in her early twenties.  What would such a person do with the power of invisibility?  Luckily for those of us trapped in the visible light spectrum--especially men--Scarlett uses her powers to correct minor injustices and not as a means of tormenting and/or humiliating idiotic males (although men are more often than not the ones perplexed by her uncanny manifestations).  Given the book’s relentlessly episodic structure (it’s less a “novel” than a collection of chapter-by-chapter adventures), she seems to spend most of her time wandering around an unnamed city stumbling onto various crises that require her invisible intervention.  In fact, for the first three chapters, she’s just trying to go home from a movie--but first she has to clear the name of a man wrongfully accused of hit-and-run driving, rescue a kidnapped puppy, and help a boxer win a fixed fight.  This part of the book made me very tired, because Scarlet keeps drawing attention to the fact that she wants nothing more than to go home and take a hot bath—but no sooner has she solved one problem, another one arises immediately.

Oddly, at least in a book about an “invisible person,” Scarlet occasionally hears the “breeze” talking to her—warning her to remain ever-vigilant for injustices that she might correct.  In one strange vignette, she walks down the street luxuriating in her brand new spring outfit—a cute skirt, blouse, and fashionable hat.  But none of the men passing by seem to notice, which irritates her to no small degree.  Suddenly she realizes the problem—she forgot to “turn off” her invisibility!  (and yes, when Scarlet goes invisible, so too do her clothes.  Yet on another occasion, when she is holding a gun, the weapon remains visible—suggesting Scarlet’s invisibility cloak only extends as far as her wardrobe).  From here, Scarlet goes back inside and changes into some clothes for going to the park, leading to the following weird dialogue:

“It’s really spring!” she said to herself, and the voice came in answer, “But not a happy time for some people!  There is a need—a need!”

This “voice” keeps recurring through the book, incessantly calling Scarlet to "the need, the need."  Later, when Scarlet says to herself one morning, “Right this minute, I haven’t a care in the world,” the voice responds, “Haven’t you--?”  And before you know it, she’s off on another adventure.

This voice is extremely troubling.  Occasionally she refers to it as the voice of her “invisible self,” but it is never clear if this means some form of invisible woman’s intuition or if she considers her “invisible self” to be a wholly other person.  Of course, this leads to the possible and much more interesting reading that Scarlet O’Neil isn’t invisible so much as insane—much in the way that we can never be sure in Mr. Ed if the horse actually does talk or if ranch-style married life in Encino has driven Wilbur bonkers.  Supporting this reading is the fact (in the book at least) that Scarlet appears to have no job or any friends—she literally wanders around talking to her “invisible self” all day long, longing for sleep (wiki claims she is a Chicago newspaper reporter—but there is no evidence for this in the book).

This actually makes the story feel somewhat like the truly eerie moments in Carnival of Souls (1962) when “Mary” finds that surrounding people suddenly can not see her anymore—as if she has simply vanished into thin air.

There is also a weirdly auto-erotic vibe to much of the book, inasmuch as Scarlet often chooses to go invisible—for no discernable “injustice-fighting” reason—just after she has purchased a particularly fetching new outfit.  For example:

But she liked the outfit—she liked it very much.  There was a two-piece look to it, though it was all in one, the bright red blouse with its full sleeves and the swirling black skirt.  What set them off were the belt and turban.  They were of the same material, richly striped in blue, green, and gold.  Scarlet added a chain of rolled gold around her neck and golden earrings.
She thought to herself, as she walked down the street.  “Perhaps I should make myself invisible.  I feel like something out of Arabian Nights!”
“Who knows?” the wind whispered gently.  “Who knows?” 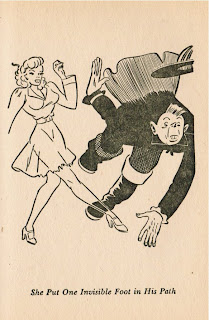 Now this is odd for a number of reasons.  As we have already established that going invisible makes her wardrobe disappear as well, it seems a bit strange to buy new clothes and then promptly make them vanish from sight.  Unless, of course…Scarlet dresses up to fulfill desires operating entirely within her own secret fantasy world, and not to be just an object for our old familiar friend, “the male gaze” (although her earlier irritation at not being seen in a new outfit somewhat contradicts this).  In any case, the “wind” chimes in again, forcing us to consider once more that Scarlet is only invisible in her mind!

Toward the end of the book, Scarlet somehow ends up in Hollywood (I missed how she got there, but life is too short to go back and find out).  For the final 50 pages or so there is a single storyline wherein Scarlet becomes the protector of an orphan, gets him cast in a movie, and then rescues him from still yet more kidnappers (named, in great ‘40s fashion, “The Professor” and “The Eel”).  The final passage brings all of Scarlet’s themes (fatigue, psychosis, anxiety, the "need") together.  Concluding her adventure, Scarlet vows to return a certain artifact to a nearby museum.

She walked faster. “And then, I’ll go back home—and I’ll sleep and sleep and sleep!”
The voice said teasingly, “Oh, will you?”
“For a while,” Scarlet amended.  “Then I go back to work.”
“It’s waiting now,” the voice said.  “Soon you’ll find out.  And there is danger.  The need is great!”
Scarlet felt the breeze on her cheek.  She said softly, “I’m not afraid.”

That seals it, I think.  If I had an adolescent daughter in 1943, I would not let her read this book—what had been a subtext is, by the final page, completely manifest.  Scarlet O’Neil has lost all touch with reality.  She is batshit crazy.
A few more brief notes:

Stamm’s son is apparently publishing an “updated” Scarlet O’Neil “graphic novel.”  Updating Scarlet from the golden age of comics to the wankery of the graphic novel looks to involve having Scarlet show more cleavage and get into more cat-fights.

Naming a character “Scarlet O’Neil” just a year after the release of Gone with the Wind (featuring “Scarlet O’Hara,” for you youngsters) seems like something more than a coincidence.  At first I thought this might be a veiled shot at Vivian Leigh--who rather famously went insane—but that seems to have happened after the comic’s debut.

It is extremely interesting that the "super-power" of the first female superhero would be invisibility! No web-throwing or planet-crushing for Scarlet, just the ability to demurely disappear!  It should be noted also that Wonder Woman had an invisible plane (before she learned how to fly "Superman" style later on).

How one draws an “invisible” person is an interesting challenge—one that probably raises many complex issues related to mimesis, representation, and Deleuzian notions of “the figural.”  But as it is late and I’m tired and I don’t want to turn invisible or insane myself, I will leave those ponderings to someone else.
Email Post
Labels: 1940s Comics creepy and/or uncanny kids Psychosis Whitman