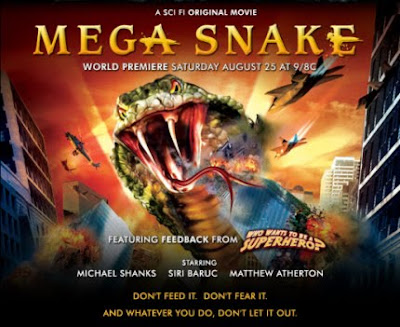 Thrift archeology suggests another video store has recently gone bust in Chicago, affording the opportunity to stockpile a number of promising titles at $1 per DVD. Given the fierce competition for our leisure dollars these days, the buck-DVD is a fairly solid investment.  Even if the movie proves utterly unwatchable, the disc itself can still be used as a coaster or to help stabilize a wobbly table.  You really can’t lose.
Although you can come close.  First up in the rotation is Mega Snake (2007), a made-for-tv film about a remarkably large snake. Commissioned by the Sci-Fi Channel, the film provides additional evidence that the cable network's primary mission is to cultivate a new "Golden Age" of shit. The network even appears to have its own house auteur, Tibor Takács, who in addition to directing Mega Snake has also given the world NYC: Tornado Terror (2008), Ice Spiders (2007), Kraken: Tentacles of the Deep (2006), and best of all, Mansquito (2005).  The last film has also been released as Mosquito Man for those not adept at neologisms.
Of course, there is really only one reason to watch a film titled Mega Snake, and that reason would be to see just how “mega” Mega Snake actually is.  Some actual real-world snakes are already 20 feet long, so one assumes "Mega Snake" would be bigger.  And he is.  Although, sadly, he never quite achieves the size and menace promised in Sci Fi's advertising campaign. There is no strafing of Mega Snake by fighter jets, nor are any large urban centers under threat.
"Mega Snake" actually begins life humbly enough as "Regular Snake," kept in a jar by a Native American mystic-wrangler named “Screaming Hawk.”  He keeps this particular snake in a jar because (1). it is extremely dangerous; and (2) legend has it that this type of snake once ate many of Screaming Hawk’s ancestors.  Screaming Hawk also informs us that the snake must not be fed any living creature or else it will begin growing exponentially.
Hearing this lore, an ambitious young pentacostal leader really, really wants that snake, presumably so he can handle it during Sunday services. Perhaps he believes God has grown tired of his flock simply going through the same routine each week with rattlers and copperheads, and so introducing a new super-dangerous snake might be a great way to renew their faith. It's never really explained.  In any case, when Screaming Hawk refuses to sell the ancient ancestor-eating snake, the young pentacostal steals it and we're off to the races.
Is there really anything else to discuss?  In the interests of time, I have prepared a chart demonstrating the subsequent progression of the film.  Below we see the sequencing of Mega Snake's victims and an index of his exponential growth.

I know some readers are wondering if there is any place for romance in Mega Snake.  Well, yes, there is.  Our main protagonist is the brother of the pentacostal who initiates the entire mega fiasco.  He has three problems to resolve: 1). he renounced his religion as a child when he saw his father bitten and killed by a snake; 2). he remains deathly afraid of snakes; 3). he has a girlfriend who is losing patience with his inability to commit to their relationship. "Mega Snake" swallows the girlfriend whole during the final carnival sequence.  Facing his fears, our protagonist goes in after her and then cuts their way out of the snake's belly, thus conquoring his fears, saving the couple, and killing Mega Snake all at the same time.  As in Jurassic Park (1993), this dangerous encounter with a giant lizard makes him realize he is ready for marriage and a family.
Email Post
Labels: Animal Kingdom Exploitation Filmed Product Paracinephilia Thrift Adventures