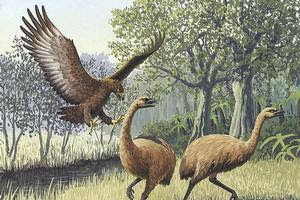 Disgusted with the pace of urban life in the mid-nineteenth-century, esteemed crank Soren Kierkegaard observed:

"Of all ridiculous things in the world what strikes me as the most ridiculous of all is being busy in the world, to be a man quick to his meals and quick to work.  So when, at the crucial moment, I see a fly settle on such a businessman's nose, or he is bespattered by a carriage which passes him by in even greater haste...or a tile falls from the roof and strikes him dead, I laugh from the bottom of my heart.  And who could help from laughing?" (Either/Or)


If this sentiment strikes you as reasonable, just imagine how much more hilarious the world would be if man-eating birds still circled the globe.  The Maori have apparently passed on stories of a bird called "Te Hokioi" for hundreds of years.  Scientists believe this legend refers to Haast's Eagle (Harpagornis moorei), a truly humongous bird-beast that went extinct around 500 years ago.  Long thought to be a lowly scavenger, Haast's Eagle recently received an upgrade to dive-bombing carnivore status, a winged killing machine that was apparently able to swoop down on its hapless prey at 70mph.  The painting above depicts Te Hokioi arriving to deliver sweet death to his absurdly flightless cousins, totally screwed by their awkward place in the grand scheme of evolution.

Once humans got to the top of the food chain, a certain hubris, boredom, and indolence set in that has not been good for the species.  But imagine if we lived in a world where a gigantic bird with razor sharp talons might at any moment dive down from the top of a skyscraper and carry off an account executive tapping away at her Blackberry, an assistant manager stopping for a moment to adjust a stubborn heel, a sluggish schoolboy unwilling to sacrifice his Doritos and Big Gulp so that he might better evade this mighty bird of prey.  It would be a more terrifying world, certainly, but also a world of noble hilarity--for there would be no shame in having been taken by Haast's Eagle. As rare and deadly as a lightning strike, falling into the clutches of Te Hokioi would be at once a horrible fate and yet testament to the unknowable caprice of nature's majestic design.

How much more vibrant daily life would be if every trip to the market began by searching the horizon for a killer bird, if seeing Te Hokioi perched atop your neighbor's carport made you calculate the distances involved and your respective land/air speeds--cunning human and colossal eagle locking their gazes in a primal standoff of mutual respect.  Consider your pride in displaying the talon scars you earned in escaping the creature, a beast you defeated with only your wits and bare hands that fateful morning when an entire flock dropped from the clouds to rain death upon your neighborhood Starbucks.

Sure, it would be sad when these beasts took away a beloved house pet or a child or people we might actually know, but that would be counterbalanced by our pride in looking into the mirror each day and proclaiming with true gusto: Somedays you get Haast's Eagle.  Somedays Haast's Eagle gets you.  If enough of these birds could thrive to pick off a hundred or so Americans each day, we would remain excitedly vigilant without becoming overly paranoid, now suddenly alert and truly alive as we ran our idiotic errands, edged our stupid lawns, or truly tempted fate by tanning our tasty bodies.

And the sublime, hilarious beauty of seeing Te Hokioi arrive as a messanger of death for someone who really deserved it-- a pompous valedictorian, a stray Kardashian, an outfielder for the Yankees, a guy waxing his Hummer, Eric Cantor, Kanye West, Octomom...the list is endless.  We would of course have to observe a period of appropriate respect and call for added protections against Te Hokioi, but deep inside would ring the laughter of cosmic retribution, the hilarity of watching human folly transported up into the clouds never to be seen again.
Email Post
Labels: Animal Kingdom Spectacles of Death