There are many remaining secrets in "District 9." 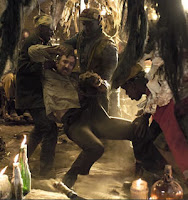 Are there really Nairobi Warlords out there who believe eating an arm would give them supernatural powers?  Did any Nairobi Warlords ever believe it, or is this just a nod to the average moviegoer’s conviction that cannibals must still exist somewhere and that somewhere is probably Africa?  Seems especially weird that a Warlord sophisticated enough to put together and supervise an intergalactic trading post would believe in cannibal-power-ingestion theory.

Do hot women have an irresistible attraction to awkward kiwi guys in sweater vests?  This was played for laughs in Peter Jackson’s Dead Alive.  But here it seems we’re supposed to believe these two are really, really in love.  I remain unconvinced…or at least uninterested.

Is the conceit of making the “prawns” sign eviction papers a joke about fascist bureaucracy, or is it just a poorly conceived narrative device?  Or is it both?  Also, are we to take Captain Prawn’s synthesis of rocket fuel in his home lab as a sign of prawn solidarity with rural American meth-addicts?

Was the film set in Johannesburg in order to demonstrate that even native Africans can be racist sons-of-bitches, thus making racism a human universal and absolving any white guilt over apartheid?

Also, it seems like no one, human or prawn, was very happy with this arrangement on earth.  Why didn’t Captain Prawn tell the authorities he knew a way to restart the ship and take everyone back on their merry way?

Does every movie now just assume it is entitled to a sequel, building it into the final act even before audience has a chance to vote with their eyeballs?
Email Post
Labels: Bio-Horror Fatal Strategies Filmed Product New World Order