Climbing Down the Ladder of Comedy 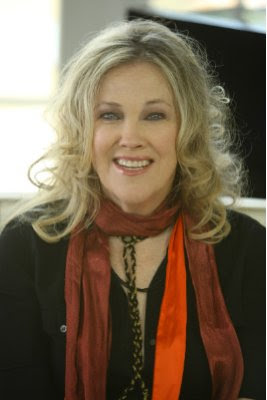 Curb Your Enthusiasm probably has no business doing a seventh season.  Still, it will have been worth it just for Catherine O’Hara’s rather extraordinary turn as “Funkhouser’s Crazy Sister” in this week’s premiere episode.  As the title suggests, O’Hara plays a particularly deranged member of the Funkhouser family, “Bam Bam,” who has only recently been released from a mental institution.  Hilarity ensues when Bam Bam rather unexpectedly hooks up with Jeff Greene in the afternoon and then shows up at the Greene’s dinner party that night.  To play the role, O’Hara taps into the demented child-woman persona that she so perfected in her earliest career at SCTV.  It was like seeing Joey Heatherton re-emerge again after twenty years in the booby hatch.

By almost any yardstick, O’Hara has had a very successful career as a comedienne. After SCTV ended in the early ‘80s, she went on to appear in Beetlejuice, After Hours, Home Alone, and in several of the Christopher Guest “mockumentaries” (perhaps most poignantly as Mickey Devlin in A Mighty Wind).  Seeing O’Hara as “Bam Bam,” however, serves as a melancholy reminder that actors—especially comedians-- often do their most path-breaking work during their first vehicles on television.  Sadly, the logic of the entertainment industry dictates that once a comedian achieves any degree of visibility on TV, he or she almost immediately migrates to the movies in search of more money and more status.  Sometimes this works out, but more often than not, said comedian is called upon to simply repeat over and over again a tepid version of whatever made them great on television.
Television—and especially sketch comedy—encourages experimentation, if only to kill the final program blocks at the end of a weekly episode.  Those who watch SNL with any regularity have probably noticed that the truly inspired, weirdest material appears in the last twenty minutes of the program—after the front-loaded crowd pleasers of: a). the requisite political/topical sketch; b). more shennanigans by the reigning recurring characters;  c). the musical guest; d). the Week-End Update segment, which now often goes all the way to the 12:30 break.  Will Forte and Kristin Wiig’s sporadic appearances as Clancy T. Bachleratt and Jackie Snad, a country duo with a passion for songs about toddlers, space ships, model-T cars, and jars of beer, is a great example of the "filler" that-- in a perfect world--would open the show.
Once in the movies, however, the demands of character/narrative based comedy—most often grounded in some degree of verisimilitude—require only a certain essence and not the more jarring “edges” of so-called edge comedians.  Consider this sad honor roll:
John Candy, O’Hara’s alumnus on SCTV, reduced in the movies to playing a series of often maudlin loveable losers.
Dan Ackroyd—a performer seemingly born to mock the entire history of television in 5 minute bits—forced to play a series of TV-ish characters unable to sustain 90 minutes of interest (Dr. Detroit, anyone?)
Chris Elliot—star of the path-breaking dada-com Get A Life—relegated to wacky second-banana roles in Groundhogs Day, Something About Mary, and eventually Everyone Loves Raymond.

David Cross and Bob Odenkirk of Mr. Show: Cross trapped for a couple of seasons as a one-dimensional doofus in Arrested Development, and now back doing stand-up (a format that does not particularly suit him) and Odenkirk making cameos here and there in homage to his influence on modern comedy.
Molly Shannon—from veteran sketch player to a series of mediocre movies and one season of Kath & Kim.
Tom Green—like him or no, the move from improvised live gags in public to scripted material released to coincide with fraternity rush week was not a good one (except for the extraordinary Freddie Got Fingered, the exception that proves the rule—a debut feature apparently unsupervised by the studio and thus allowed to go places taste and economics dictate it should not have gone).
Will Amy Sedaris ever be offered something as "out there" as Strangers with Candy?   How long until Tim and Eric are in a crappy road movie with a hack director and a mandatory uplifting ending?  Enjoy them while you can.  It's just a matter of time until Wiig is playing the wacky best friend of some less talented actress, either in the movies or on a terrible sitcom.
Email Post
Labels: Filmed Product Intentional Comedy The TV