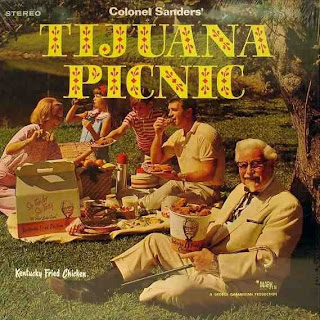 Yeah, I know.  WTF? I mean, really, what were they thinking?   Feel free to contribute your own hyperbolic exclamation of pop-cult astonishment.
I found this elpee in a thrift store in Merrillville, Indiana--and it has haunted me all weekend.  We often encounter strange images and bizarre objects in daily life, but rarely do we subject them to the rigorous semiotic analysis necessary to fully explain--if only to ourselves--just what makes them so unnerving: a mass punctum of perversity, to quote another lover of home cooking.  It's easy to look at Tijuana Picnic and think, "Whoa, that's weird," without truly considering the texture and density of said weirdness.  But that would be lazy.
So, now that we've all calmed down a bit, let's consider what makes this image so truly arresting. 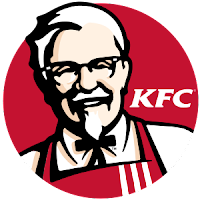 First and foremost, it features Colonel Sanders chillin' under a tree with a bucket of chicken.  That much is obvious.  It's the first thing you notice--"hey, that's Colonel Sanders, the real Colonel Sanders."  Back when KFC was still Kentucky Fried Chicken, the Colonel (Harland Sanders) frequently appeared in the flesh in his venture's various promotions.  It was a good strategy for advertising the new franchises as suburban plantations of downhome cooking rather than as just another gulag for resentful fry-basket jockeys.  Problem was, Harland Sanders was already in his sixties when he realized no one had cornered the market on capturing, killing, and frying every chicken in the nation, and with him getting older and the company bigger, KFC eventually realized the Colonel needed to make the gradual transition from living legend to timeless icon.  Hence his Kim Jong Il-like transformation into  an eternally cheerful batter enthusiast.

In the era of mass imaging, seeing the "real" Colonel becomes--somewhat ironically--borderline uncanny, a reminder that there actually was some kind of deep-fried referent behind all the cornpone semiosis that we now associate with KFC.  Imagine, for example, if there had actually been a real Ronald McDonald--not the cartoon, plastic, or costumed carney versions that scare children at grand openings--but an actual guy named Ronald McDonald who made the rather risky post-war decision to start cooking hamburgers in a clown suit.  Seeing him now in person would be profoundly upsetting, not only to little kids, but to anyone who only knew him as an abstracted signifier of mirthful burger culture.
Most consumers would probably agree that they prefer their Dixie fantasies to be populated by imaginary Colonel Sanders, Aunt Jemimas, Sambos, and Uncle Bens, because seeing them as real people only serves as an unpleasant reminder of the actual power relations involved in creating such branding.  For example, culinary historians generally agree that fried chicken first began as a staple of American cuisine among antebellum slaves, making the "Colonel" to southern cooking what Elvis was to rock 'n' roll--a living, breathing white guy rich enough in a certain type of capital to exploit black culture for white consumption (I mean, look at that family behind him). Plus, for what it's worth, Elvis' manager was named "the Colonel"--an ultimately meaningless coincidental detail, but one I feel should be aired in this particular context.
As this blog's dozen or so unaccidental readers might recall, KFC product turns up in a couple of Herschell Gordon Lewis movies in the mid-1960s. In the Gruesome Twosome (1968), dancing co-eds share a bucket of KFC chicken before the one capable of remembering her dialogue gets snuffed by the titular psychopaths (for an extended analysis of this scene, click here).  Even more disturbing, in its own way, is the Colonel's cameo in Lewis' The Blast Off Girls (1967), in which Harland compels a reluctant rock band to jam for a bucket of chicken.  Life is short, but truly, you owe it to yourself to witness these two minutes of fruggin' product-placement.
Not quite the same as Michael Bay putting a CGI Pepsi in the pincers of a thirsty alien murphy-bed robot truck, but charming nevertheless.  In fact, mass entertainment could only improve if product placement were required by law to be this integral to the storyline, like in 30-Rock when Jack discovers that a cup of frozen sugerfat at McDonalds means more to him than dessert at a 5-star Manhattan restaurant.  These embarrassingly naked moments of financial servitude are a great reminder that freedom isn't free and neither is massively-capitalized entertainment programming.  H.G. Lewis demystifies the entire economic foundations of the cinema here by saying, in effect, "Sure, I'll show you what ends up happening to this happy-go-lucky band of mop-tops, but only after we stop and pimp chicken for a couple minutes so I can buy some more film stock."  In a way, it's an even more brilliant commentary than Godard showing his producer signing checks in the opening of Tout Va Bien (1972).  That villain is anonymous and off-screen, a moving hand metonymically and thus tastefully evocative of French capital.  But the Colonel has the balls to interrupt the story and essentially tell everyone on set, especially Lewis, to dance for his amusement.  "Come back anytime for the same deal," he chortles menacingly, shuffling back to his rocking chair and shotgun to guard his greasy vault of gizzard dollars.
But back to "Tijuana Picnic."  Tijuana?  Picnic?  Here the Colonel hoped to cash-in, not on the impending influx of poorly paid migrant workers who would eventually staff his empire's network of chicken-rendering plants, but on the mid-60s craze for Herb Alpert and the Tijuana Brass.  Alpert's combo was the anchor of his own A&M record label, churning out a ton of albums with a sound so unique that eventually all the songs sounded exactly the same (quick, in your mind, differentiate "Spanish Flea" from the theme to "The Dating Game."  It can't be done).   Below is Alpert's take on "A Taste of Honey," an archival clip that will be of interest to anyone who has ever consumed a martini ironically.
Of course, to the modern eye, there is an added perversity to seeing the words "Tijuana Picnic" emblazoned over the Whitey McProtestant family frolicking on the grass in the background.  It is an unsettling reminder that "Tijuana," in the besieged white cultural imaginary of the 21st century, has transformed from an exotic vacation playground of tequila, bullfights, and subservient hotel workers to a warzone where fratboys get kidnapped on their way to donkey-shows and are forced to mule condoms of smack back to San Diego.  And speaking of donkey-shows, "dirty sanchezes," muling, and other North American constructions of sexual deviance south-of-the-border, there is also the hint that a "Tijuana Picnic" might involve something more nasty than eating a bucket of fried chicken in the open sun.  Just what will happen once the two kids get lost to go fly a kite or something?  Will it or will it not involve Harland, who for now sits discretely to the side biding his time?  As everyone here has no doubt also ingested a gravied mass of the Colonel's K-Ration mashed potatoes, perhaps a "Tijuana Picnic" is code for some type of vomit fetishism. 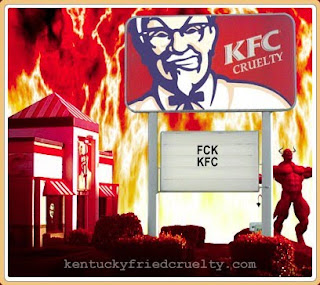 For those who find the entire idea of chicken-fried genocide appalling, you might consider visiting kentuckyfriedcruelty.com, and in particular their "sign generator" function.  There you can make and post your own KFC marquee--as in the simple yet elegant "FCK KFC."
For those whose politics run slightly less vegan, might I also suggest http://lpcoverlover.com/, a great site for perusing this and other jaw-dropping album covers.
And finally, for any vomit fetishists out there, many websites exist to serve your needs--but you'll need to track them down yourselves.
Email Post
Labels: Archeology Commerce Paracinephilia Rapid Ingestion