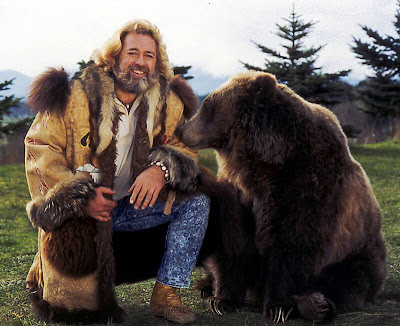 There is a grizzlyadams.com.  This is remarkable because it brings together two constituencies typically not associated with one another—itinerant woodsmen and the Internet.  Maybe the name Grizzly Adams means nothing to you.  Probably it shouldn’t.  As entertainment franchises go, Grizzly Adams ranks somewhere between Quark and My Mother the Car, and in its own way, is equally implausible.
Unjustly accused of murder, an old-timey trapper (Dan Haggerty) flees into the mountains to avoid the law.  In his roaming he happens upon a bear cub, an orphaned grizzly he adopts and names “Ben” (although this Ben has nothing to do with Gentle Ben—television’s other short-lived attempt at bear-centric programming, in that case starring a bite-sized Clint Howard just after he blew everyone’s mind as the eerily dubbed baby spaceship captain in Star Trek). Now known as “Grizzly” Adams, the trapper develops a Doolittle-ish ability to understand cougars, rabbits, foxes, skunks, eagles and other high-altitude varmints, many of whom Ben would probably like to eat but, as I recall, doesn’t since he must endorse the program’s post-"all nature is one" -hippie/pre-"let the world burn"-Christian environmentalism (I may be wrong here, but I certainly don’t remember Ben shredding any of God’s creatures after Adams had just talked to or empathized with them). 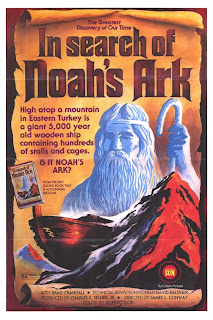 The Life and Times of Grizzly Adams appeared first as a novel and then as a movie in 1974 produced by Sunn Classics Pictures.  If that outfit sounds familiar, oh child of the bicentennial, perhaps you were hypnotized by their frequent domination of after-school advertising in the late 1970s.   Sunn specialized in supernaturalistic family fare, bouncing back and forth between the Fortean and the Christian in films like The Outer Space Connection (1975), In Search of Noah’s Ark (1976), the Bermuda Triangle (1979), and In Search of Historic Jesus (1979).  It’s a schizoid filmography, some films targeting the post-Sunday-school matinee crowd and the others future laser-show enthusiasts.  In 1983 they threw everyone a curve and made Cujo.
Grizzly Adams was such an unexpected hit, and did so well in its network premiere, that NBC decided to bring the premise of buddy man-bear fugitives to TV in 1977.  Here’s a quote from Wikipedia that demonstrates why both Wikipedia and network research departments are so often testaments to the orderly accumulation of useless knowledge:
the company used extensive market testing to produce the series, which was based on tests showing that audiences liked stories about men and animals in the wilderness; that bears were favorite wilderness animals; and that grizzlies were the favorite type of bear. 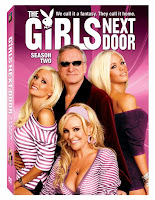 I think a similar research logic was used to create The Girls Next Door, except by substituting L.A. for the wilderness, women for bears, and blondes for grizzlies (plus Hef seems to be able to intermittently comprehend the crude vocalizations of his Grotto wildlife, making him a "Grizzled" something-or-other).   Actually, it seems suspicious that anyone really did this research, inasmuch as one would assume NBC was writing a check for “Grizzly” Adams and not “Flying Squirrel” Jackson.  But who knows, maybe they were just double-checking that men still pumped their fists at the sight of a bear, particularly the campground clearing superstar that is the Grizzly. In any case, Dan Haggerty reprised his role as the title character and the show ran for two seasons.  To forestall those tempted to write a Donner Pass fanfic tale of Ben eventually eating Adams or Adams Ben, a made-for-TV movie brought the saga to a close in 1982.
Which brings us back to the improbable existence of grizzlyadams.com.  Oddly, the one thing that you can’t find on the website (or at least I couldn’t) is Grizzly Adams himself, either the film, the series, or even a Dan Haggerty t-shirt.  I assume this must be a situation similar to John Fogerty having to shell out money to play his own CCR catalogue—songs that he wrote!  Somehow Sunn appears to have had the foresight to retain the rights to the name “Grizzly Adams” without actually remembering to get a piece of the syndication or merchandising.
What you will find at the site are media products that continue the company’s somewhat perverse ricocheting between Christian documentaries and the Chariots of the Ghosts of Atlantis stuff.  You will also find a truly fearsome “legal” page, so fearsome in fact that you will see no images from their website here so that a den of Rocky Mountain bobcats do not mysteriously find their way into my basement. 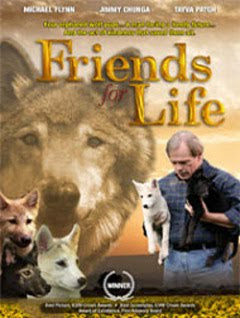 Particularly prominent is the trailer for their most recent endeavor, a direct-mail DVD feature called Friends for Life (image from Amazon!).  In this one a lawyer devastated by the recent death of his wife has almost hit rock bottom, about to give up on life entirely. But an angel intervenes and leads him to an orphaned pack of wolf pups, which he immediately adopts.  Time goes by in the form of copious slow-motion photography of wolf pups running, wrestling, and licking faces, until at last it is time for them to return to the wild.  Other stuff happens that apparently gets the lawyer in more jeopardy, but then the wolves return in the final reel to repay their karmic debt by “saving the lawyer’s life” a second time. From the ads, it is unclear if they literally intervene to break up a knife-fight or if they perform a more subtle, cosmic miracle of some kind.
You don’t need to be a structuralist to see the similarities to the original Grizzly Adams.  Man > “lost” > orphan animal > interspecies bonding > final redemption.  Seeing a 60 second spot for the new film on cable, an ad that directs you to grizzlyadams.com for more information, there is a sense that this might be the most viable future for all film and television drama—the economic and cultural circuitry of genre made even more manifest in this form of direct-mail distribution.  I want to see stories about troubled men who learn to live again by befriending heartwarming animals. I will pay you $19.95 for each example of this formula that you can provide me.
If fictional drama becomes even more marginalized, fossilized, and esoteric (as seems to be the case), there’s no telling just how high the ceiling might be for certain select franchises.  Stories about struggling urban hospitals that reaffirm the bittersweet cycle of life: $24.95 a pop.  Marley and Me, except with a cat?  We can do it in post for $29.95 a disc.  Ever dreamed of having a CSI franchise in your own sorry little backwater?  It’s a sliding scale: $9.95 for CSI: San Francisco to $99.95 for CSI: Lubbock.  Write us a check for a cool million and we’ll come make an episode of Law and Order: Nebraska Ethanol Co-op Unit.
Harlequin has understood for years that patrons want what they want—why then do film and television continue to go through all the expense of convincing us something is completely new and different, when we know and they know that we actually just want to see another seemingly mismatched couple flirt with each other for 3 to 5 years while solving some type of recurring enigma until they finally end up in bed and in syndication?  How much would you pay for your absolute favorite form of dramatic affect sent directly to your home with no fear that it will contradict your expectations or pleasures in any way, shape, or form? 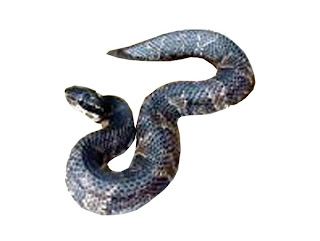 So it is with grizzlyadams.com, a site that invites us to look forward to the compartmentalized pluralism of the future-a media landscape where everyone can frame nature just as they like it.  In one mailbox (electronic if you like), perhaps that of a rustbelt retiree who never quite followed through on that vow to move to Colorado, awaits the latest Grizzly Adams production:  Badger McGee, in which a father worried about his son's deployment to Iraq learns about the healing powers of nature and the spiritual bonds between all God’s creatures in a universe of unending wonder and surprise, all thanks to the plucky little badger who takes up residence in the trunk of his boy's custom Dodge Dart.  And in another mailbox, perhaps that of a mercilessly snide DMV worker, the latest production from the House of Herzog: Fangs of Senseless Death, in which an adorable family of cottonmouths teaches a khaki-clad expedition of white-watering yuppies that nature is an absurd abbatoir adrift in a cruel universe of unending terror and despair.
I, for one, cannot wait to not watch whatever it is you think is so great.
Email Post
Labels: Animal Kingdom Filmed Product Post-Analogue Reality The TV