This is the big week—perhaps the beginning of a new tradition that may last decades, even centuries: Beatles Global Reformatting Day. On Tuesday, the datastream will cough up two new digital iterations of the band’s work: re-mastered editions of all the albums and the fab four’s debut in their own version of Rock Band.  So far the reviews have been extremely positive, especially for Rock Band (which as many point out is the more significant arti$tic event here). Forty and fifty-something music writers are gushing over how this will make The Beatles relevant for a whole new generation (i.e. their own increasingly distant and snarky kids).  The once vexed Apple Corp. (the old record company, not the new religion) is getting Kudos all around for taking the time and effort to get all the details just right.  Testimony is pouring in from parents proud that their children--raised in a world where John Mayer must pass as a functional “songwriter”--are now bursting into tears as they master the haunting plastic-slapping complexities of While My Guitar Gently Weeps.  Maybe twenty years from now, these children will introduce their own kids to the holographic edition of the game, left under the Lennon tree with a Beatles Global Reformatting Day card from Hallmark.

Most graying rock critics have no doubt figured out that hating this new incarnation of Beatlemania would only make them even more irrelevant than graying rock critics already are.  Most excited is McCartney himself.  Sir Paul recently observed that rock ‘n’ roll, comic books, and video games are all similar in that each began as a juvenile time-waster but eventually attained the status of “art.” Apparently Macca is determined that no one-legged half-his-age ex-model is ever going to make him look like a senile old man ever again.  Look for the imminent debut of the I Wanna Hold Your Junk iphone “sexting” app.
As to what impact Rock Band will have on the legacy of the band’s music, that’s probably not all that important.  And Your Bird Can Sing, Rain, and Paperback Writer will remain the exemplars of a certain pop form forever and always, even if one day kids only slog through them to win an extra life, or a floating strawberry, or access to the 8-track gameplay at the Abbey Road level. No, what’s more disturbing about translating The Beatles into game form is the continuation of the very idea of “The Beatles.”  Music is music—but the “idea” of The Beatles has wrought untold psychic devastation for nearly half a century, and now apparently will continue to do so well into the new millennium.
“Be the Beatles,” proclaims the game’s tagline.  No, please, don’t be the Beatles.  We’ve already lost two, three, maybe four generations to the narcissism industry that erupted in the wake of their initial invasion of America.  You can’t blame the lads, of course, who often said they had no real ambition beyond getting out of Liverpool.  But in the wake of the incredible fame-vortex opened by The Beatles, their singular warping of the time-space continuum within the boomer imaginary, we have all suffered for some 40 years now with an adolescent fantasy world that simply will not go away—the very world that produced, not only Mark David Chapman, but also the uncomfortably similar logic of Rock Band itself. 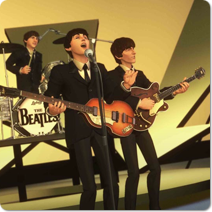 The Beatles™: Rock Band™ gives fans what they’ve been waiting for: a chance to experience the Beatles’ legendary story from the inside. You won’t just watch and listen as the Beatles make rock history, create landmark records and conquer the world — for the first time, you’ll be part of the band.
No, actually, you won’t.  The Beatles are dead and you never bothered to learn a musical instrument of any kind.  Why not try your hand at something more useful, like Middle-Management Hero or Bureaucrat-Who-Makes-a-Difference Idol?  Hang out around “Strawberry Fields” in Central Park for a day: there are enough scary people walking around who have done everything within their power to look just like John Lennon.  We don’t need them sliding deeper into psychosis by thinking they’ve mastered the rhythm guitar part to Octopus’s Garden.
A few have expressed surprise that the band would enter into a gaming venture.  But of course the Beatles licensed their music to Rock Band—they invented this game in the first place, inspiring millions of teenage boys to pick up tennis rackets and mime Strawberry Fields into a mirror, forcing their friends to attend an imaginary concert of the mind wherein other boys could only stand in mute awe of such creative genius while the girls went absolutely wet-knickered at the prospect of potential sexual congress with you, yes you, the skinny kid in the mirror playing Strawberry Fields with a tennis racket.

At least there used to be some degree of privacy and shame around adolescent redemption fantasies—an embarrassment captured so masterfully in The King of Comedy as Rupert Pupkin conducts mock celebrity interviews in his basement and imagines his high school principal officiating his marriage on national television. But at some point this fame-play of self-worth = envious attention became a spectator sport rather than a form of auto-ego-eroticism, and before anyone knew it, an entire part of the gaming industry began actively encouraging America’s youth to play at being rock stars…. performing “air guitar” in public with no sense of shame…wearing a Rock/Porn Star t-shirt with no apparent talent or discernable hotness…slamming down a “Rock Star” Energy Drink so that one might have the energy to continue promoting a digital avatar’s extraordinary career.  There is a touch of pathos in these only half-ironic performances of vain self-delusion, like being unable to avert your gaze as the school spazz dangles by his underwear in front of the pep squad, telling his football team tormentors, “One day I’m going to be a famous rock star and you will idolize me.  Just wait and see.”
Harmless adolescent fantasies you say.  Perhaps.  But consider how many crappy sets you had to sit through in high school, college, and beyond by actual bands populated by men in their teens, twenties, thirties, and (gulp) forties who simply could not let this fantasy die.  Sure, they might have treated the whole thing as a joke and named their band “The Accountants,” or “Doom Pigeon” or “The Corbin Bernsen Experience,” but somewhere in the back of every band member’s mind remains the fantasy of absolute commercial and critical dominance, a daydream of what it would be like to float in a swimming pool surrounded by groupies while a respected documentarian quizzes the band about the genesis of their zeitgeist changing album, Slacker Piranha. 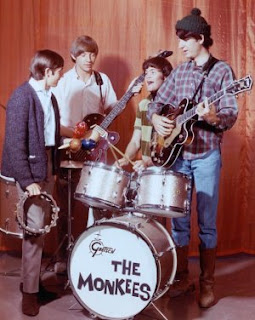 If anything, this syndrome has only gotten worse.  As many have lamented, at some point the popstar division of the culture industry realized it was simply too expensive and time-consuming to keep generating new product to anchor this fantasy economy (paid labor, after all, actually had to write and record a new song for each episode of The Monkees). Thus the brilliant one-two reality punch of The Real World and American Idol, two shows that radically shifted the fame terrain from “creating” and “doing” to simply “performing” and “existing.”  American Idol…Guitar Hero…these franchises could never have succeeded if based on actual song craft (Randy Jackson at a coffeehouse audition in Topeka…”Congratulations, dog, you’re goin’ to the Village”)—instead they are designed to reward technical competence in the replication of prevailing performance codes—be it following Lars Ulrich’s drum patterns on Enter Sandman or seeing if it is possible to break the land coloratura sound-barrier by belting out yet another version of that horrifying "I'll go on and on" Titanic song.
Perversely, even Grand Theft Auto provides players more creative control than the current iterations of Rock Band or Guitar Hero.  At least GTA allows you to drive around the city running down random pedestrians, if so inclined (or in an even more perverse subversion, I have been told, you can simply drive around Liberty City obeying all the traffic laws).  Shouldn’t the new Beatles’ Rock Band have an option where acing Tomorrow Never Knows allows the players to push their mop-top avatars into a polyphonically perverse open jam session, leading to a final “trip-out” level where the entire gig transforms into a LSD-fueled orgy on Carnaby Street?

There is an argument that popular art was meant to be “of a moment” and thus eminently disposable—songs, movies, TV shows, celebrities.  They are ephemera born within a very narrow historical window to service a fleeting moment of cultural affect and social imperative.  “In my merry Oldsmobile,” “Beware of the blob,” “a mulatto, an albino, a mosquito, my libido, “my hump, my hump, my hump, my lovely lady lumps” all of this shit should be utterly incomprehensible within five years, tops.  It is a testament to the evil genius of the entertainment industry and the regressive attachments of its audience that certain artifacts continue to be “passed down” from generation to generation as holy relics. 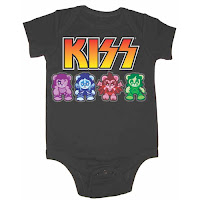 Sure, maybe your toddler does look cute in a Kiss Army Onesie.  Maybe you’re proud your kid knows how many moons orbit Tatooine.   Perhaps you are looking forward to seeing your own flesh and blood hike the trail of tears from bell-bottoms to drainpipes and back again.  But if your child still shares your taste in music after the age of 14, if they rifle through your music collection (whatever the format) and respond with anything other than stunned disbelief, we have all failed them--utterly and miserably. No child should be put in the perverse situation of remembering her first kiss by associating it with the same song to which she was conceived (or even to which both she and her parents were conceived).  It’s sick and it’s wrong.
Were The Beatles the greatest 3-minute Verse/Chorus/Verse/Chorus/Bridge/Chorus band of all time?  Who knows…probably…they did invent the form, after all.  But the nation's youth should not be taught to believe this before they’ve had a chance to make up their own minds about it, or indeed even before deciding if they care about guitar based harmonic pop in the first place.
So as you watch your child comfortably riffing his or her way through “Back in the U.S.S.R.” on the game controller this weekend, be ashamed, be very ashamed.  The country is so screwed up right now, we no longer have time for such nonsense.  We need every smart, creative person under the age of 25 working on how to recycle used breast implants into affordable housing—or harnessing Jonas Brothers pheromone-release clouds into some form of renewable energy—or devising schemes to divert Ryan Seacrest’s bank account toward relief work in the third world.  What we don’t have time for is to lose yet another generation to “being the Beatles.” 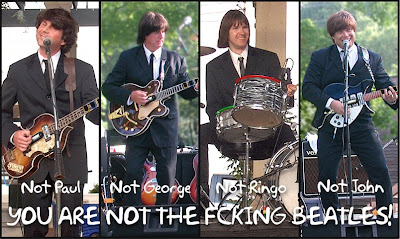